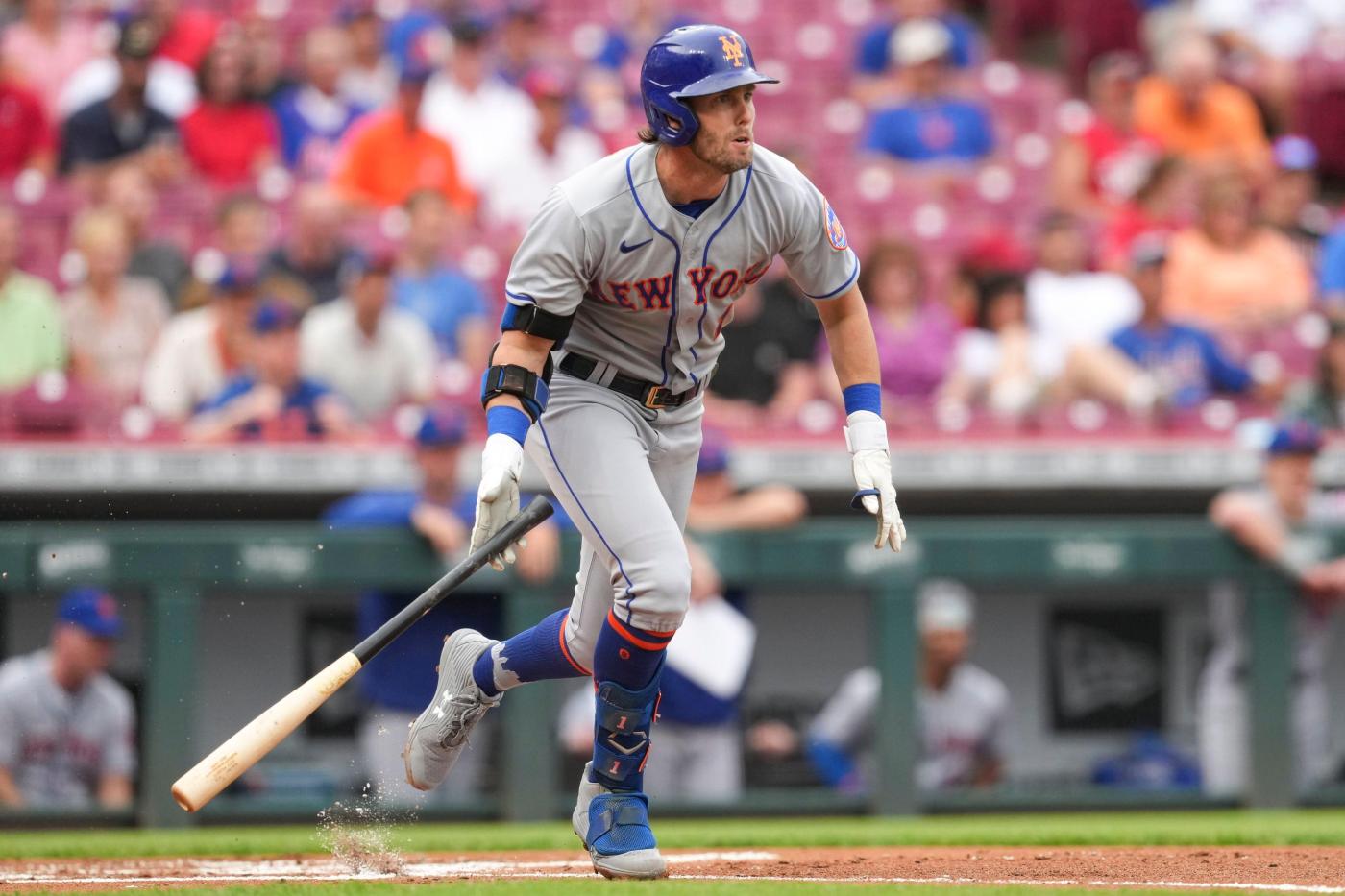 CINCINNATI — The Mets managed to dodge humiliation thanks to a rare feat that fans haven’t seen from them in recent weeks.

Trailing by one run and down to their final two outs, Brandon Nimmo ripped a line drive to left field off former Met Hunter Strickland to spark a surge. Then Starling Marte cranked an RBI double down the third-base line as Nimmo turned on the wheels and hustled all the way home from first base. Marte’s clutch extra-base hit tied the game and completed the comeback.

It was a reminder of their killer instinct from earlier in the season.

“We’re a good offense, we know it, we just haven’t been able to come through with the big hit against those guys,” Nimmo said. “I think it was really important to pull it out at the end here.”

Adam Ottavino (3-2, 2.59 ERA) kept the Reds from scoring in the bottom of the ninth and sent the game to extras. Then Dominic Smith cashed in the go-ahead ghost runner, Ender Inciarte, from second base with a double down the first-base line. Smith is hitting .333 (9-for-27) with six doubles since returning to the Mets. For good measure, James McCann collected an RBI double and Nimmo parked a three-run home run before the night was over.

Just when they were being counted out, the Mets stormed ahead to an 8-3 win over the Reds on Wednesday night at Great American Ballpark. The Mets won their 19th series of the season following the late-game theatrics and, on the brink of dropping two out of three to the 28-win Reds, they staved off embarrassment and instead will enjoy a happy flight back to New York.

“This does nothing but add confidence to the offense and to the guys in the clubhouse,” Nimmo said. “Very important win. Even though, yeah it’s against Cincinnati, they made us fight and scratch and claw with everything we got this whole series. They might not have a great record, but they didn’t play like it when they were playing us.”

Wednesday’s comeback was especially refreshing because the Mets have been struggling with situational hitting for some time. Their first couple months of the season were highlighted by dramatic comeback wins — particularly their wild ninth-inning eruption against St. Louis in April and their eight unanswered runs against the Phillies in May.

But since June, the Mets entered Wednesday hitting .229 with runners in scoring position — ranked 24th in MLB. And it gets worse. In the past two weeks, the Mets were batting .162 with runners in scoring position, which is 29th in the league. And in a smaller sample, their RISP numbers in the Great American Bandbox this holiday week were going to look ugly before they mounted their ninth-inning rally. The recent sluggish offense was the main reason Nimmo called the Amazin’s comeback on Wednesday a huge relief.

“To get to our end goal, we’re going to have to have wins like this and games like this,” Smith said. “It’s not always going to be pretty, but if we can find ways to win ballgames, we’ll be where we want to be at the end of the year.”

David Peterson has had better outings for the Mets, but he pitched well enough to allow the Mets to come back in the ninth and 10th innings.

The southpaw lasted just 3.2 innings in his return from the paternity list. He allowed five walks and hit one batter as his command seemed like it was left behind in Denver. It was a far cry from his recent success. Peterson entered his 11th start of the year with 25 strikeouts in his last three outings. He also had not allowed a walk in his last two starts.

As much as Peterson couldn’t find the strike zone on Wednesday, the lefty still kept the Mets in the game. Chalk this one up to being a new father and jet lag, because Peterson’s larger sample size of terrific outings will allow the Mets to continue trusting him to bounce back his next time out.

“I come out of the game not very happy with my performance, but I feel confident with whoever Buck [Showalter] chooses,” said Peterson, crediting the bullpen on Wednesday.

Peterson (3.48 ERA) gave the ball to Adonis Medina, who was again terrific for the Amazin’s and gave the offense a chance to make a comeback. Take away his one poor outing this season, when he gave up five earned runs at Colorado, and the right-handed rookie reliever has a 0.90 ERA (two earned runs, 20 innings) across 10 appearances for the Mets this year.

Edwin Diaz earned his 19th save of the season after striking out the side in the bottom of the 10th inning. Cincinnati’s ghost runner at second base never stood a chance.