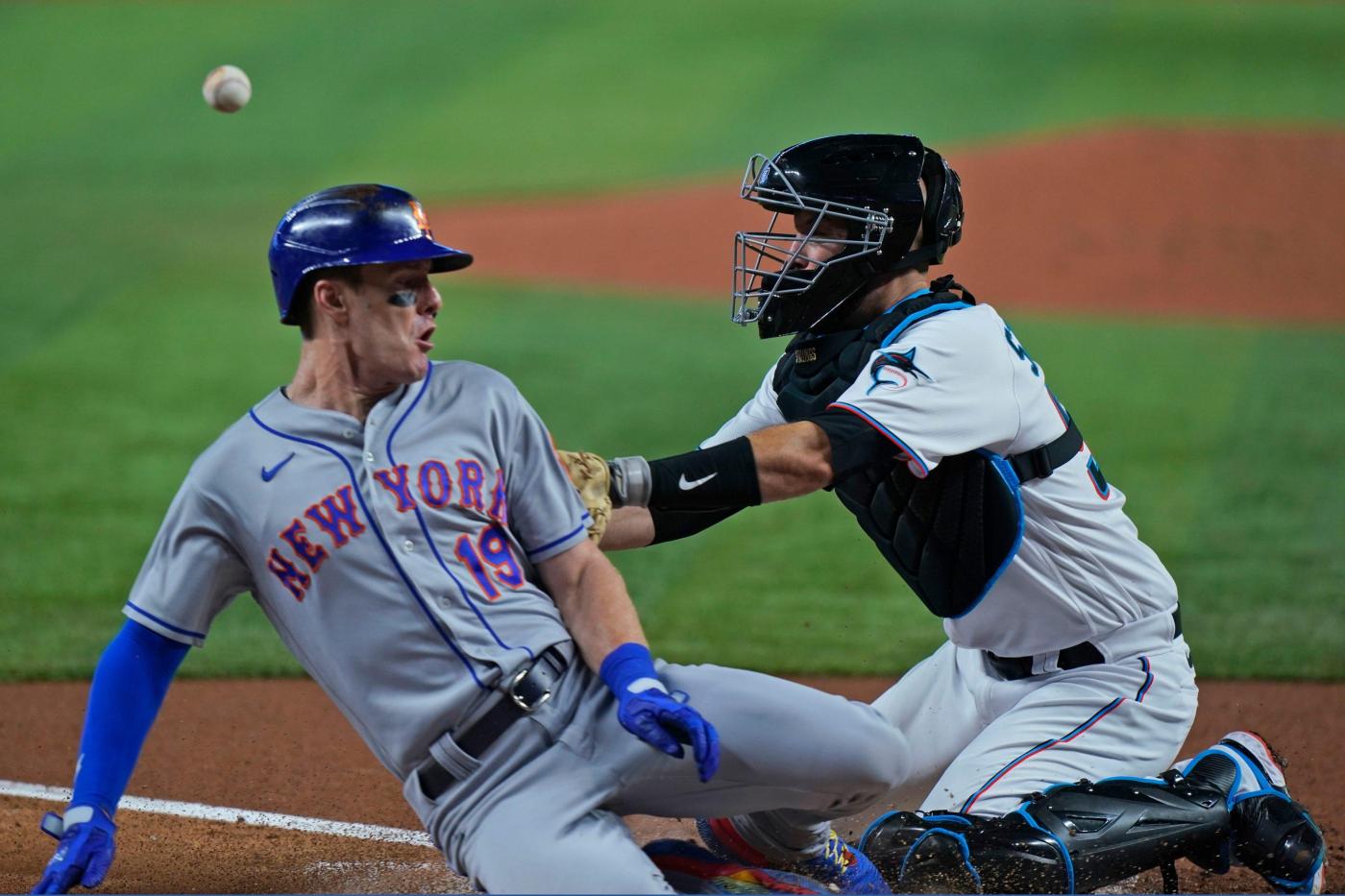 MIAMI — A starting pitcher giving up 12 hits is never good.

A starting pitcher giving up 12 hits and recording only eight outs is even worse.

A starting pitcher giving up 12 hits and recording only eight outs in what might be his last start before being traded is about what we’ve come to expect from the Miami Marlins.

The Mets took it to Pablo Lopez on Sunday afternoon, beating him and the Fish, 9-3. Lopez spotted the Mets the first six runs of the game, the impossibly named Marlins’ reliever Jake Fishman let another in during his first ever MLB outing, and the rest was just window dressing. At the end of the day, the Mets had a season-high 19 hits and now they get to board a plane to Washington D.C. and play a team that’s even worse than the Marlins.

“We focused on getting good pitches to hit, we got them, and we didn’t miss,” Francisco Lindor summarized afterward. “It was one of those days where we got our pitch and hit it wherever we wanted to hit it.”

Miami staged their idea of a comeback in the fifth and sixth inning, drawing within four runs, but that was as close as they’d get. The win is the sixth in a row for the Mets, giving them a sweep of the Marlins and tenth win in 14 games against the fish. In those 14 games, the Amazin’s have outscored their aquatic NL East companions 69-39.

After Brandon Nimmo kicked things off with a fly out to left, the Mets strung together four hits in a row to go up 2-0. Mark Canha shot one through a drawn-in infield later for the third run of the inning, which saw the Mets send eight batters to the plate. They’d match both that run and hitter total in the third, knocking Lopez out in the process.

It was a series of polar opposites for these two teams. The Mets had everything on the field go right, the Marlins had rough game after rough game. Miami was without injured regulars Jazz Chisholm, Brian Anderson, Garrett Cooper, Jon Berti and Jorge Soler. The Mets lineup is virtually at full strength, added Daniel Vogelbach and Tyler Naquin recently, and are preparing to get Jacob deGrom, Trevor May and James McCann back from injury this week. Each member of the Mets’ lineup recorded a hit on Sunday. The Marlins’ Jesus Aguilar, one of the few established hitters on their active roster, didn’t record a hit all series.

Despite its non-competitive nature, there were a few fun notes from this game, besides just the Marlins employing a Fishman. Tyler Naquin opened his hit account with the Mets, dropping a ball just past diving center fielder J.J. Bleday — and right fielder Bryan De La Cruz, who was supposed to be backing him up — for a triple. Tommy Hunter, who is used less often than the “9″ button on a microwave, also got to pitch for the first time since July 17. He stuck around for eight pitches, getting the final out of the sixth inning before disappearing to whatever cave the Mets keep him in.

It was also another solid day for Taijuan Walker, which is becoming less and less notable with each one. Pitching is always easier with a lead, and Walker had a six-run advantage when he came out for the third inning, but his performance was still praise-worthy. Walker lasted 5.2 innings, giving him 15 starts in a row of at least five frames. On May 5, facing the Phillies for the third straight time, Walker only got through four innings and was tagged for six earned runs. Since then, Buck Showalter has essentially been able to hand him the ball and go on managerial cruise control, even on nights when Walker doesn’t like how he’s feeling.

“I didn’t think I had my good stuff,” Walker admitted. “It was alright. Velo wasn’t really there, the splitter was okay, but the slider I left up a little bit and didn’t really land my curveball too much. I just felt off today.”

With the return of one cosmic talent coming soon at Nationals Park, the Mets have another one starting to heat up. Francisco Lindor racked up three more hits and a run batted in on Sunday, making his final line from the three games in Miami 7-for-11 with three walks, three RBI and a homer.

Beating bad teams is what good teams are supposed to do, and even with the Marlins throwing two good pitchers in Lopez and Sandy Alcantara, the Mets took care of business. They should be able to do the same thing against the MLB-worst Nats, perhaps fattening up on wins before their meat grinder of a five-game series with the Braves.

“We still got two months to play here,” Canha said. “I think we know that we have to take it one day at a time. It’s cliche, but it’s so true.”