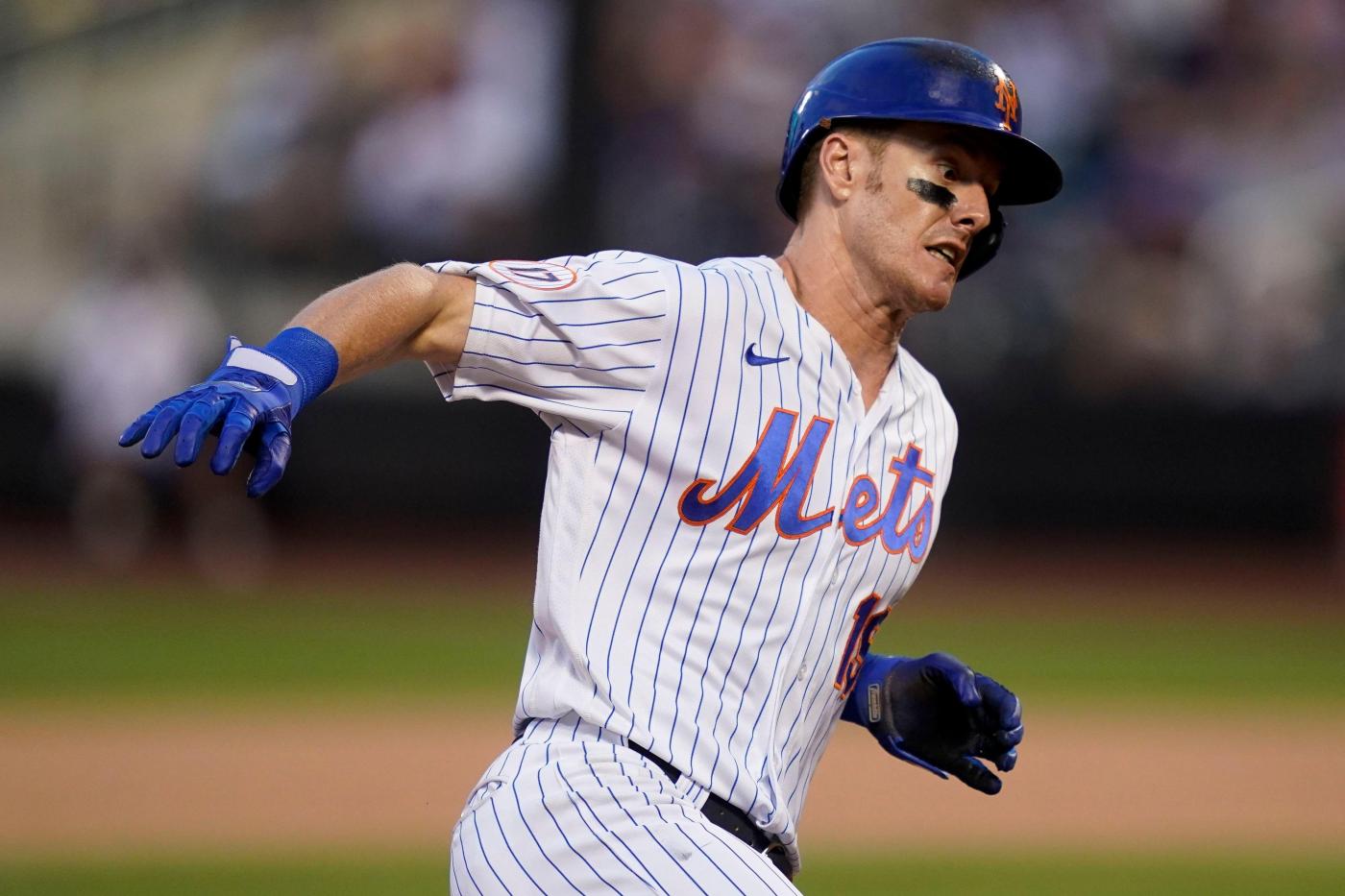 What began as a nostalgic day in Flushing honoring Keith Hernandez ended in a dramatic walk-off win for the home team.

The Marlins charged ahead in the top of the 10th inning on Jon Berti’s infield single to shortstop. Francisco Lindor corralled the line drive in the hole and threw to third base, but Eduardo Escobar didn’t get back to the bag in time. The ball hit the back stop and trickled away from reliever Colin Holderman, who was backing up the play, as Billy Hamilton, representing the go-ahead run, sprinted home.

The Amazin’s teamed up to negate Lindor’s crucial error with Tomas Nido’s game-tying double in the bottom of the 10th, followed by Brandon Nimmo’s ground ball to Marlins reliever Tanner Scott. Scott fumbled the ball on the mound as Nido came sprinting home.

The Mets walked it off against the Fish for a 5-4 win in extra innings on Saturday at Citi Field.

But it all began with a mustachioed first baseman. Pete Alonso, rocking a bushy upper lip on Hernandez’s number retirement day, deposited his 23rd home run of the season to break the scoreless game and put the Mets on the board in the fourth inning. It was a passing of the torch, just moments after Hernandez’s special ceremony that saw his No. 17 hang from the rafters at Citi Field.

Alonso also wore stirrups Saturday in a tribute to Hernandez’s memorable look at his old post. With the home run, Alonso joined Mike Piazza (2000) and Wright (2006, ‘08) to become the third player in Mets history to amass at least 70 RBI before the All-Star break.

Mets players honored Hernandez by wearing No. 17 patches on their right sleeves on Saturday and by forming a line in front of the dugout and shaking hands with the 1986 champion-turned-beloved-broadcaster following his on-field ceremony. The mascot Mr. Met also sported a mustache on his massive face.

Baseball has a way of making special moments feel like magic. That’s what happened on Alonso’s home-run ball. Then in the sixth inning, some of Hernandez’s clutch power seemed to have rubbed off on the Mets star shortstop. Perhaps on another day, that two-run shot would’ve gone foul. But this was Hernandez’s day, and nothing was going to stop the Amazin’s from making sure it would be enjoyed to the fullest.

In the sixth inning, Lindor broke the 2-2 tied game with a laser two-run home run to left field. Lindor, the only Mets player who stood in front of the dugout and watched Herandez’s number retirement ceremony, leaned to his left as the ball sailed just fair of the left-field foul pole.

The Marlins momentarily dampened the energy at Citi Field when Jesus Aguilar crushed a game-tying home run off Adam Ottavino in the eighth inning. But the 43,336 fans in attendance roared again when Luis Guillorme responded to Aguilar’s dinger with a leadoff double in the bottom of the eighth inning.

Despite the win over the Fish, there were a couple of losses on the field. Starling Marte and James McCann both left Saturday’s game with injuries in the fourth and sixth inning, respectively. Marte exited with left groin tightness and McCann experienced left side discomfort, the Mets announced. Both players will undergo further imaging on Sunday.

Carlos Carrasco allowed two earned runs on seven hits across 5.2 innings in his 92-pitch outing against the Marlins. He was pulled in the sixth inning with a one-run lead, though Seth Lugo allowed his inherited runner to score on a wild pitch. Carrasco’s most impressive moment of the evening came in the first inning, when he escaped a bases loaded, nobody out jam unscathed thanks to a strikeout and double play.