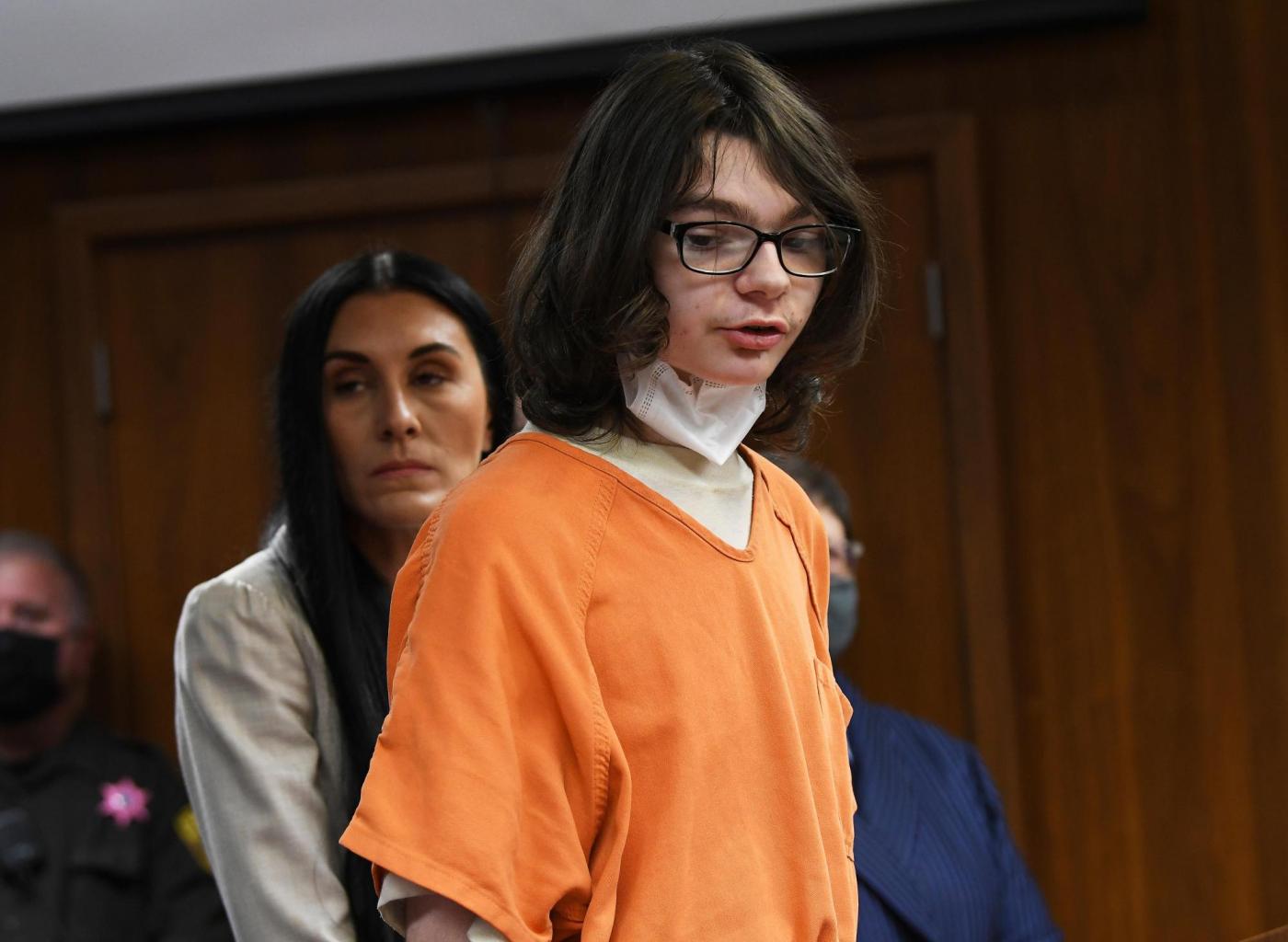 By COREY WILLIAMS and MIKE HOUSEHOLDER

PONTIAC, Mich. (AP) — A teenager pleaded guilty Monday to terrorism and first-degree murder in a Michigan school shooting that killed four students and may be called to testify against his parents, who’ve been jailed on manslaughter charges for their alleged role in the tragedy.

Ethan Crumbley, 16, pleaded guilty to all 24 charges, nearly a year after the attack at Oxford High School in southeastern Michigan. In the gallery, some relatives of the victims wept as assistant prosecutor Marc Keast described the crimes.

“Yes,” Crumbley replied, looking down and nodding in affirmation, when asked if he “knowingly, willfully and deliberately” chose to shoot other students.

The prosecutor’s office said no deals were made ahead of Monday’s plea. A first-degree murder conviction typically brings an automatic life prison sentence in Michigan, but teenagers are entitled to a hearing where their lawyer can argue for a shorter term and an opportunity for parole.

“We are not aware of any other case, anywhere, in the country where a mass shooter has been convicted of terrorism on state charges,” Oakland County Prosecutor Karen McDonald said.

The teenager withdrew his intent to pursue an insanity defense, and repeatedly acknowledged under questioning by Judge Kwame Rowe that he understands the potential penalties.

His parents, James and Jennifer Crumbley, are jailed on charges of involuntary manslaughter, accused of making the gun accessible to their son and ignoring his need for mental health treatment. Ethan Crumbley’s lawyer, Paulette Michel Loftin, said it’s possible he could be called upon to testify against them. She said they’re under a no-contact order, and he has not spoken to his parents.

Ethan Crumbley was 15 at the time of the shootings and had no discipline issues at the school, roughly 30 miles (50 kilometers) north of Detroit, but his behavior earlier that day raised flags.

A teacher had discovered a drawing with a gun pointing at the words: “The thoughts won’t stop. Help me.” There was an image of a bullet with the message: “Blood everywhere.”

James and Jennifer Crumbley declined to take their son home on Nov. 30 but were told to get him into counseling within 48 hours, according to investigators.

Ethan Crumbley had brought a 9mm Sig Sauer handgun and 50 rounds of ammunition to school in his backpack that day. He went into a bathroom, pulled out the weapon and began shooting. Within minutes, deputies rushed in and he surrendered without resistance.

A day earlier, a teacher had seen Ethan Crumbley searching for ammunition on his phone. The school contacted Jennifer Crumbley, who told her son in a text message: “Lol. I’m not mad at you. You have to learn not to get caught,” the prosecutor’s office said.

Parents have rarely been charged in school shootings, though the guns used commonly come from the home of a parent or close relative. Jennifer Crumbley referred to the gun on social media as a “Christmas present” for her son.

Ethan Crumbley admitted under questioning Monday that his own money was used to purchase the gun, which his father bought for him on Nov. 26, a few days before the shooting. He also said the gun was “not locked” in a container or safe the morning he took it to the school.

Sheriff Michael Bouchard told reporters Monday that Ethan Crumbley still had 18 rounds of ammunition when he was arrested.

“It’s my belief he would have fired every one of those had he not been interrupted by deputies going immediately in,” said Bouchard who also called Ethan Crumbley “a twisted and evil person.”

“I hope he gets life without parole,” the sheriff added. “He has permanently taken lives away from four lovely souls and he’s permanently affected many, many more.”

Prosecutors earlier this year disclosed that Ethan Crumbley had hallucinations about about demons and was fascinated by guns and Nazi propaganda.

“Put simply, they created an environment in which their son’s violent tendencies flourished. They were aware their son was troubled, and then they bought him a gun,” prosecutors said in a court filing.

His parents said they were unaware of their son’s plan to commit a school shooting. They also dispute that the gun was easy to grab at home.

Madisyn Baldwin, Tate Myre, Hana St. Juliana and Justin Shilling were killed, while six students and a teacher were wounded. In addition to the counts of first-degree murder and terrorism causing death, Ethan Crumbley admitted guilt to seven counts of assault with intent to murder and 12 counts of possessing a firearm in the commission of a felony.

The judge set Feb. 9 for the start of hearings to determine if he’ll be sentenced to life without parole or get a shorter sentence due to his age, and a chance at release. His lawyers will be able to argue a variety of mitigating circumstances, including family life and mental health. Prosecutors didn’t signal in court if they will argue for a no-parole sentence.

Loftin said the teenager is remorseful: “He’s taking accountability for his actions,” she said. As for the victims, she said “I don’t think there are any words that could make them feel any better.”

Meghan Gregory, whose son, Keegan, was hiding in a school bathroom with Justin Shilling when Shilling was fatally shot, told reporters after the hearing that it was tough to see Crumbley for the first time in person.

She said her son did not want to attend, but did ask for a link to the livestream so he could watch the hearing from afar.

“He struggles with the thought of being in the same room,” Gregory said. “I mean, he was held hostage by him for almost six minutes.”

Detroit attorney Ven Johnson, who is suing the Oxford school district and the Crumbley family on behalf of several victims’ families, said Monday’s plea “is one small step forward on a long path towards obtaining full justice for our clients.”

“We will continue to fight until the truth is revealed about what went wrong leading up to this tragedy, and who, including Crumbley’s parents and multiple Oxford Community Schools employees, could have and should have prevented it,” Johnson’s statement said.

Wolf Mueller, another lawyer representing victims’ families, said it was “pretty incredible to hear” and “a stunning development” that Ethan Crumbley acknowledged he purchased the gun with his own money.

“It was cold-blooded what he did,” Mueller said. “And, while he may have been dealt a bad set of cards with the parents, it’s still a choice that he made to do the harm and bring the tragedy to Oxford.”