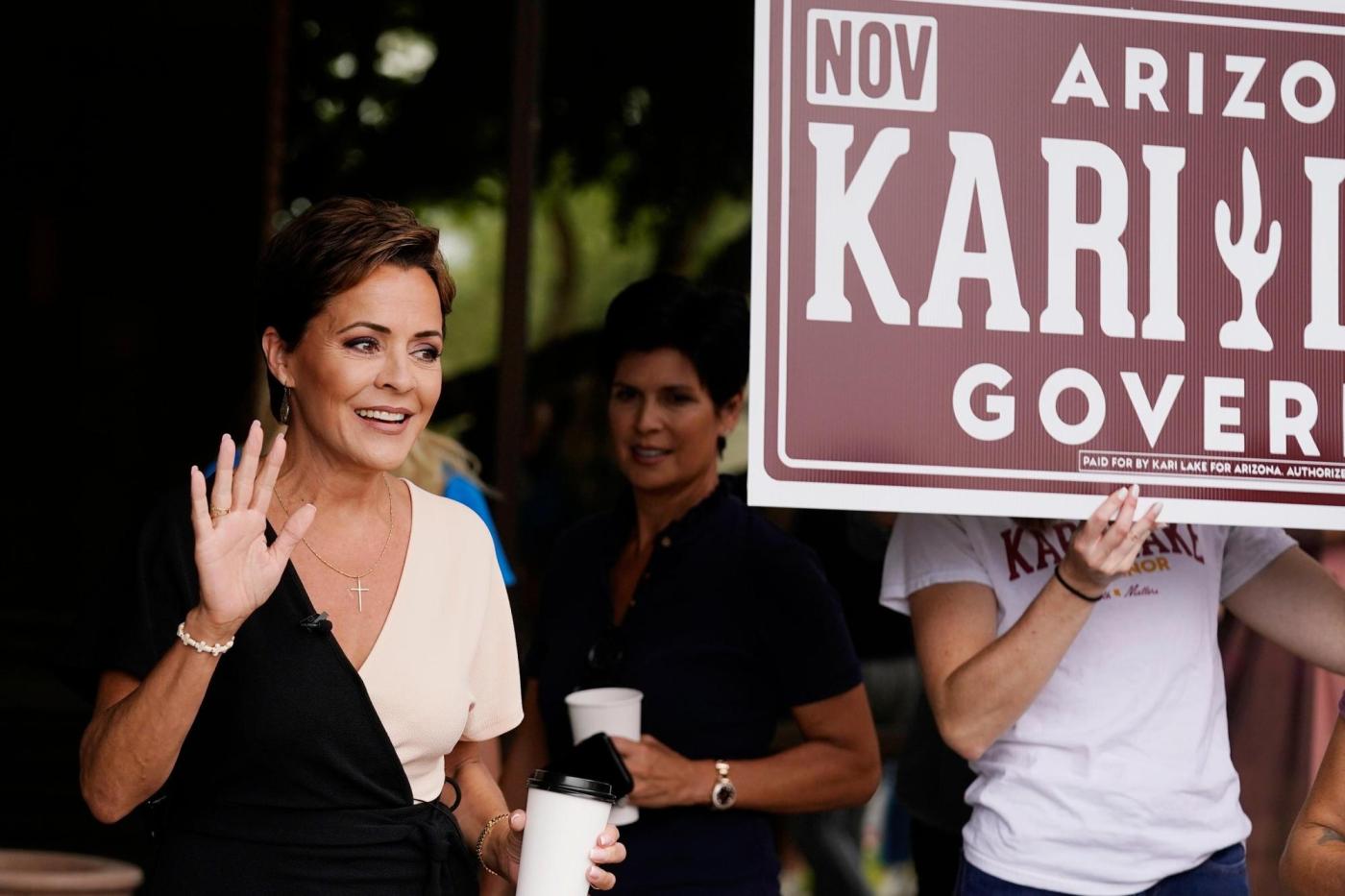 The first thing they teach you at Kamikaze School is: if you’re going to blow yourself up, at least get the other guy.

There are a whole bunch of election deniers and fraud-peddlers running for office this election cycle who appear to have missed the first day of class. Either that or they confused “Kamikaze” with “Hara-Kiri,” the ritual self-evisceration once practiced by Japanese samurai, because after the midterm results were tabulated, the battlefield was strewn with defeated Republicans whose crazy conspiracy theories had boomeranged, leaving their Democratic opponents victorious.

Americans’ midterms verdict seems to have been: inflation or no inflation, we’ll take sane over crazy. That they would choose so wisely was not a foregone conclusion. For weeks pundits had been predicting a “Red Wave,” and Republicans had crammed the cable news channels crowing about it. Now they are eating crow.

Even Arizona gubernatorial candidate Kari Lake, a cross between Evita and Cruella de Vil, was struggling at weekend’s end to win an election she’d seemed certain to win. Another stable genius, Lake threatened a reporter who posed a mild, even flattering question to her about whether she would consider being Donald Trump’s running mate in 2024.

“Are you new covering this? Because we have talked about this before,” she snarled. “I’m going to be your worst fricking nightmare for eight years, and we will reform the media as well. We are going to make you guys into journalists again, so get ready. It’s gonna be a fun eight years. I can’t want to be working with you.”

Turns out arrogance is far down the list of what’s notable about Lake. Lack of principle is right down there with it. She was a registered Republican until 2006. Then she changed her registration to become an Independent. Then in 2008 she became a Democrat. Then in 2012 she became a Republican again. What she lacks in gravitas, however, she more than makes up in crazy. Her gubernatorial campaign focused on the phony claim that the 2020 election was “rigged and stolen,” which endeared her to you-know-who, who endorsed her, which was the point.

Across the country, Republican candidates cut from the same crazy cloth as Lake were widely defeated. These included Arizona’s Republican candidate for Secretary of State, Oath Keeper and election-denier extraordinaire Mark Finchem, who marched on the Capitol on January 6th, and GOP Secretary of State nominees in Nevada, Michigan and Minnesota, all boasting a similar pedigree.

Michigan Governor Gretchen Whitmer mopped the floor with Republican Tudor Dixon, who claimed that COVID-19 was part of a Democratic plot to “topple” the United States. The Republican gubernatorial candidate in Pennsylvania, Doug Mastriano, promoted QAnon social media posts, denounced the 2020 election as stolen and sought to overturn it, all among other similarly impressive qualifications for office. He was trounced even more thoroughly than Dixon.

Dr. Mehmet Oz, Donald Trump’s nattily-dressed hand-picked nominee for the Senate in Pennsylvania, lost to a six-foot-eight-inch bald man with a beard and tattoos in shorts and a hoodie. New Hampshire’s Dan Bolduc, another Trump favorite, endorsed The Former Guy’s claim that the 2020 election was rigged, which led Trump in turn to pronounce him a “strong guy, tough guy,” which is also what they said about Mussolini. Senator Maggie Hassan defeated Bolduc by over nine points.

Still, there’s plenty of reason for caution, and none for hubris. Fully 39% of American voters have a favorable view of Trump, even after an attempted coup d’état, 300 violations of the Espionage Act and God knows how much obstruction of justice. There were plenty of victories by Trump acolytes, including an awful lot of election deniers. Many of the races that Democrats won were won by narrow margins. And the former President is poised to announce he’s running again for President, and most of the Republican Party will support him full-throatedly.

Jeff Robbins, a former assistant United States attorney and United States delegate to the United Nations Human Rights Council in Geneva, was chief counsel for the minority of the United States Senate Permanent Subcommittee on Investigations. An attorney specializing in the First Amendment, he is a longtime columnist for the Boston Herald, writing on politics, national security, human rights and the Mideast.