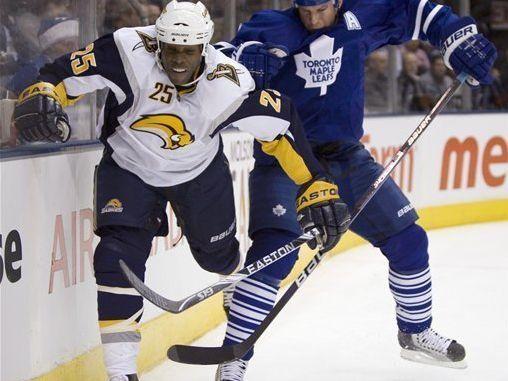 Mike Grier, the younger brother of Miami Dolphins general manager Chris Grier, made history in the NHL on Tuesday.

Mike Grier was named the general manager of the San Jose Sharks, making him the NHL’s first Black GM. The Sharks announced the move on social media and held a news conference on Tuesday afternoon.

Chris Grier released a statement on his brother’s hiring later in the day: “I am incredibly happy and proud of Mike. The San Jose Sharks organization is getting a man of character and integrity. He has always been respected on and off the ice by his peers. Mike will bring his work ethic and passion every day to the job. Mike understands the game, with intelligence, experience and knowledge to succeed as a GM. Our parents deserve all the credit for how they raised us. We were very fortunate to be able to observe and learn from our father, Bobby, while growing up. Congratulations to Mike and the San Jose Sharks on a great hire.”

The Griers are in rare air as one of the few — if any — brother combinations to hold GM roles for teams in different American professional sports leagues. They are the first Black brothers to be GMs of pro teams.

Chris Grier, 52, became Dolphins GM in 2016 after holding various scouting positions within the franchise since 2000.

Mike Grier, 47, played 14 seasons in the NHL for four different teams: the Sharks, Buffalo Sabres, Washington Capitals and Edmonton Oilers. He retired from playing hockey in 2011.

“Really excited to get to work and be back in the Bay Area,” Grier said in a video released by the Sharks on Twitter. “I know there’s been lots of ups and downs, but I’m ready to work hard and get at it and get this thing back on the tracks.”

Mike Grier spent the past season as New York Rangers’ hockey operations adviser and also worked as a scout for the Chicago Blackhawks from 2014 to 2018. He replaces Sharks interim GM Joe Will, who took over in November after longtime GM Doug Wilson vacated the role due to medical reasons. Grier will lead a coaching search after San Jose fired coach Bob Boughner, who was formerly coach of the Florida Panthers.

The Grier brothers are sons to Bobby Grier, who held various coaching, scouting and executive positions for the New England Patriots for two decades from 1981 to 2000. Bobby Grier has been a Dolphins consultant since 2017.

The Dolphins’ Chris Grier led what is likely his most successful offseason in Miami this year.

He pulled off a blockbuster trade with the Kansas City Chiefs for star wide receiver Tyreek Hill and acquired to tackle Terron Armstead in free agency, among a series of other moves to bolster the offense for new coach Mike McDaniel. Grier and the Dolphins also kept their defense intact after the unit spearheaded an effort to win eight of the team’s last nine games in 2021, falling one win short of a playoff berth.