Todays Though > News > Mike Preston: Ravens might have found No. 2 option they need in the backfield
News

Mike Preston: Ravens might have found No. 2 option they need in the backfield 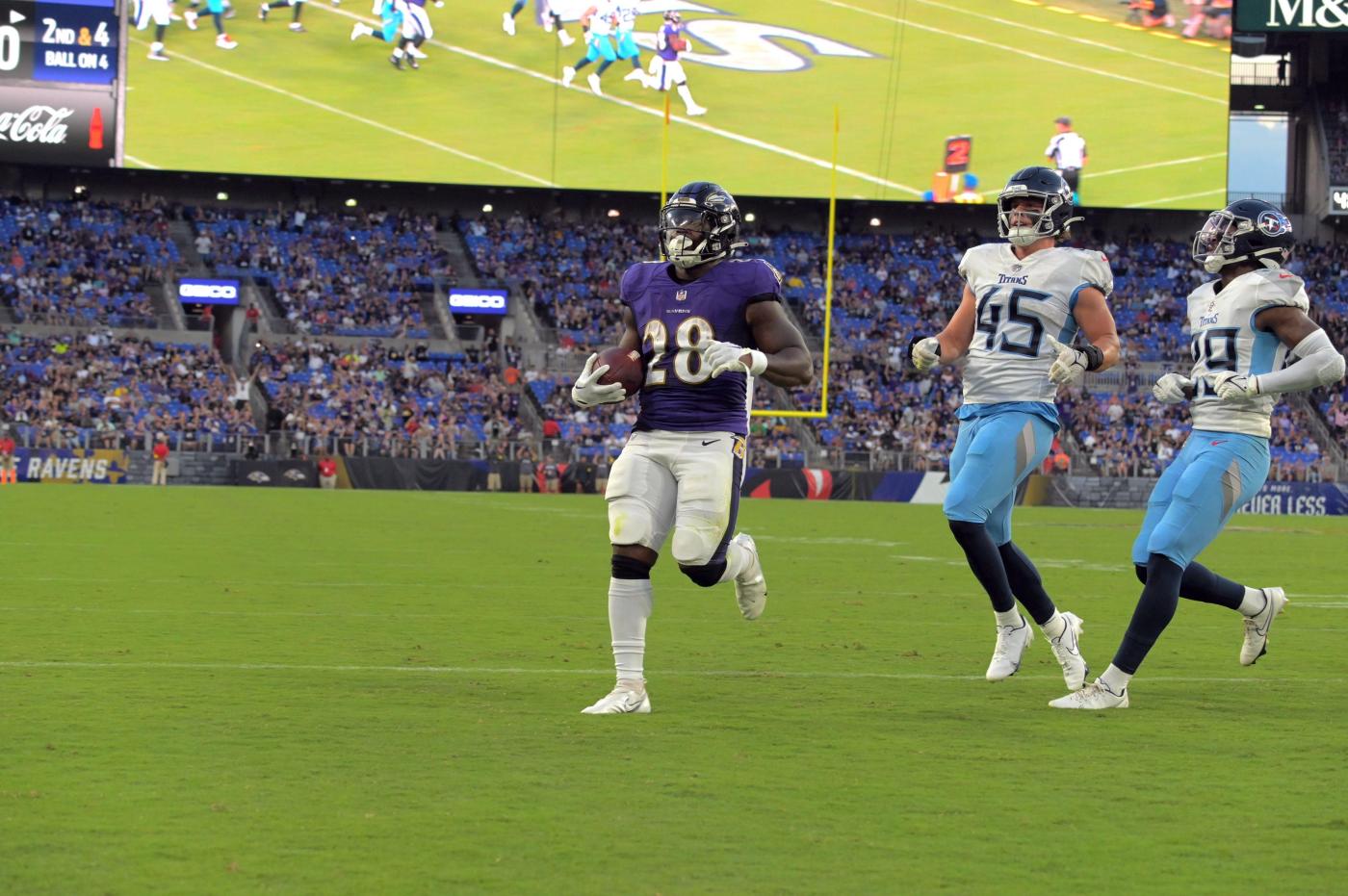 The Ravens need a No. 2 running back to complement starter J.K. Dobbins in the early part of the regular season, and veteran Mike Davis got closer to filling that role with a strong effort in the team’s 23-10 win over the Tennessee Titans in the preseason opener Thursday night at M&T Bank Stadium.

Throughout the first two weeks of training camp, the Ravens rotated Davis, fourth-year running back Justice Hill and rookie Tyler Badie in the starting lineup, but Davis appeared to separate himself from the pack against the Titans.

There are two unpardonable sins for a running back in the Ravens’ offense: fumbling and failing to pass block. Those mistakes will earn a player a quick spot in coach John Harbaugh’s doghouse. Davis, however, answered any questions about his pass-blocking ability against Tennessee.

Not only did the 29-year-old veteran rush for 22 yards and one touchdown on five carries, but he crushed Titans outside linebacker Rashad Weaver on a chip block on an early pass attempt and later picked up a blitz up the middle.

Those kinds of plays get the attention of a coaching staff.

“I can’t imagine there was a lot of [running] room early,” Harbaugh said. “Tennessee was pretty stout in there. We ran some powers and some leads up there. I think [Davis] ran hard and got a few yards and then he popped a couple, like that TD run. He looked good to me.

“It’s a matter of looking at the tape and grading all of them. But they all looked good.”

In the first two weeks of training camp, Davis ran more sideline-to-sideline instead, which doesn’t fit the Ravens’ downhill, one-cut running game. But on Thursday night, he was decisive. When there was no hole up the middle, he quickly accelerated and bounced outside, which led to a 4-yard touchdown run around the right end in the first quarter.

Hill showed the same kind of burst as he finished with 11 yards on three carries. The 2019 fourth-round draft pick would have had 20 more yards but twice had decent runs nullified on holding penalties by rookie tight end Isaiah Likely. Badie is probably the best receiver of the three and has as much potential as either Davis or Hill, but the former Friends School star lacks experience.

The lack of playing time will have a major impact on who fills the No. 2 slot while Gus Edwards recovers from a torn ACL suffered last summer. The Ravens’ running game isn’t just a key to this offense, but the entire team. They need to have a strong running game to control the tempo and win the field-position battle. They don’t have the quarterback nor the receivers to win a wide-open shootout.

But if the Ravens dictate the pace and play sound defense, they can win most games. Edwards was the perfect closer at 6 feet 1 and 238 pounds, but he isn’t expected to be ready for the regular-season opener Sept. 11 against the New York Jets.

At this point, Davis appears to be the Ravens’ best option backing up Dobbins, who returned to practice this week from the physically-unable-to-perform list after suffering a torn ACL last preseason. Davis isn’t as big as Edwards, but he does weigh 220 pounds. In seven NFL seasons with five teams, he has more than 2,000 rushing yards, 1,000 receiving yards and 18 total touchdowns.

With the Atlanta Falcons last year, Davis had 503 rushing yards and 259 receiving yards while starting eight of 16 games.

In a perfect world, Edwards would be the Ravens’ ideal No. 2 running back, but that will have to wait until later in the season. Right now, Davis appears to be the best option.