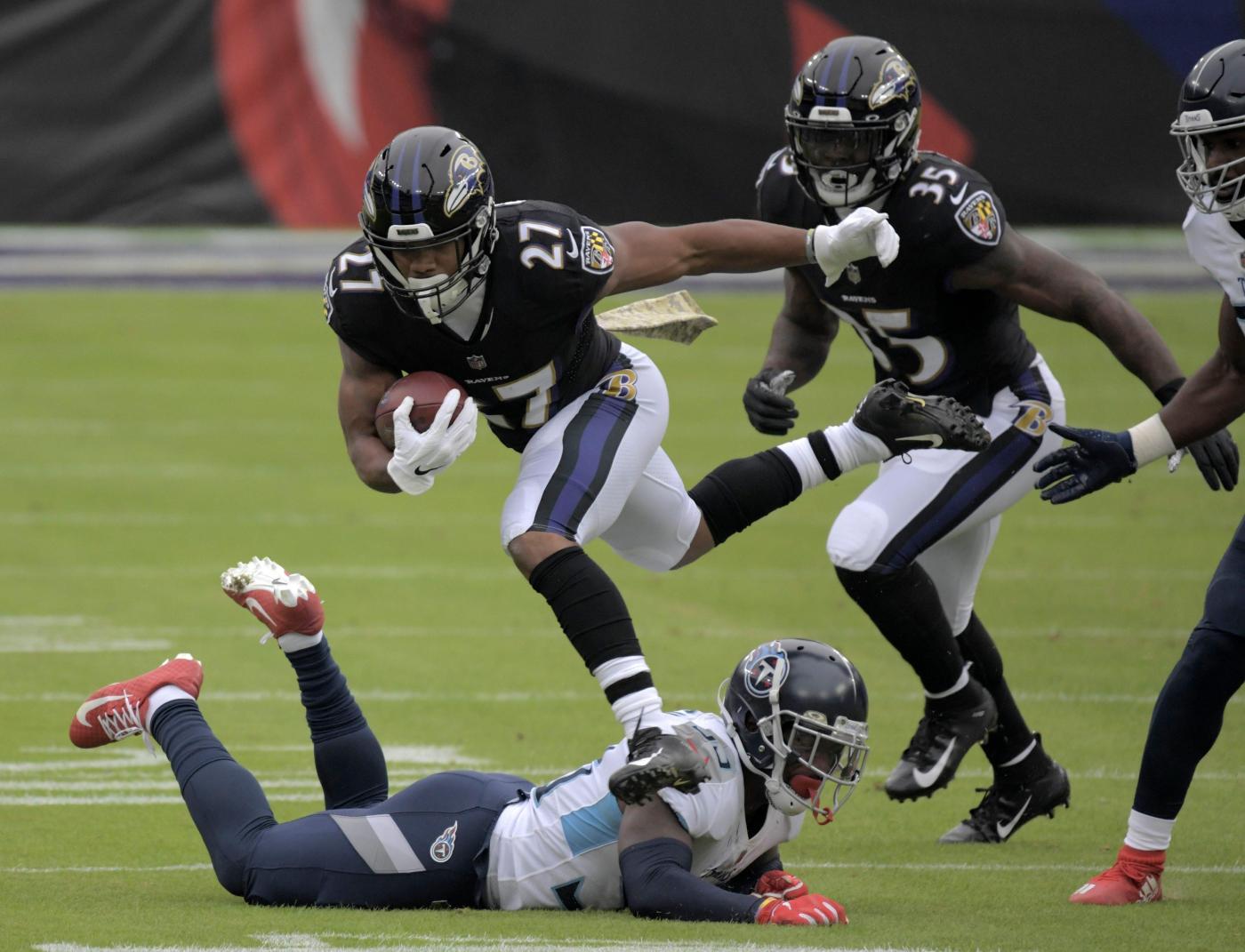 As the Ravens continue to get players back from injury, none are more important for making a deep postseason run than running backs J.K. Dobbins and Gus Edwards.

There is a cry from some league analysts and fans for general manager Eric DeCosta to add another receiver, such as free agent Odell Beckham Jr., but that’s normal in this town.

This offense built by coordinator Greg Roman requires a strong running game and a top-notch halfback such as Dobbins, the third-year pro out of Ohio State.

To complement Dobbins, the Ravens have the perfect fourth-quarter closer in the 6-foot-1, 229-pound Edwards.

When both were last healthy at the same time in 2020, Dobbins rushed for 805 yards and nine touchdowns, while Edwards had 723 yards and six touchdowns.

They both suffered torn ACLs the following preseason and missed all of 2021, but Dobbins has played in the last three games and Edwards has practiced for nearly three weeks now.

They could be together again soon, which is why the Ravens don’t need to panic and make any questionable trades for receivers before the Nov. 1 deadline.

“Last year was odd, crazy,” Dobbins said after practice Thursday. “I think I had my injury like four days before Gus, and on the day I was going in for surgery I got [the] notification about Gus and [cornerback] Marcus Peters going down.

“Now, I just offer him [Gus] words of encouragement. I can’t wait for him to get out there with me and it will be a good mental breakthrough for him, too.”

The Ravens (3-2) have struggled at times this season on both sides of the ball, but they can get help on both offense and defense with a strong running game.

The Ravens have the No. 7 ranked running game in the NFL, but that’s misleading because quarterback Lamar Jackson has rushed 49 times for 374 yards. Dobbins only has 28 carries for 108 yards and one touchdown.

It’s a limited role, but it gives him time to build up strength in his knee and get into peak shape in the final month of the season when teams make that last playoff push.

That same approach is also being used for Edwards. The current rotation includes Dobbins, Kenyan Drake and Mike Davis.

It’s not a great mix, but decent.

“When you start looking into who gets how many carries, who gets how many snaps, that’s not really in our thought process,” Ravens coach John Harbaugh said. “We’re not saying, ‘Oh, this guy has got to get so many carries, and if he doesn’t, then something is wrong.’ You play guys in situations, guys get a little bit tired, some guys do certain things better, [and] you want them out there for certain things.

“We’ve got three backs up; they’re all good players, so you want to use them all to some degree, as much as you can. None of those guys are really special teams guys. So, yes, you just try to win the game with the guys you have and where you’re at in that place and time.”

The Ravens’ philosophy is clear. They want Jackson throwing the ball 15 to 35 times a game, and when he goes beyond that, the Ravens have struggled, especially in the postseason.

Jackson is an explosive talent but is usually limited to quick passes over the middle. His decision-making can be poor, which is one of the reasons the Ravens have struggled in recent weeks against Cincinnati and Buffalo.

Ideally, the Ravens want to strike early in games, get a lead and then win the time of possession battle with a strong running game.

Having a healthy Dobbins and Edwards would also help the defense. The Ravens rank No. 32 in pass defense, allowing nearly 290 yards per game. They have lost fourth-quarter leads against Miami, Buffalo and Cincinnati, but at least they prevailed against the Bengals.

One of the best ways to keep high-powered offenses off the field is with a strong running game. There aren’t many things more demoralizing for a defense than a steady dose of Dobbins and Edwards in the fourth quarter.

On Sunday, the Ravens face a New York Giants team allowing an average of 131.6 rushing yards per game. Two weeks ago against the Bills, Dobbins juked a defender and left him grasping for air. Against the Bengals, a run that should have been a 2-yard loss instead resulted in a 12-yard gain when Dobbins ran through several defenders.

He’s close to returning to 100%, but the Ravens are patient. They want Dobbins and Edwards (nicknamed The Bus) together again.

“I’m still working, trying to get better each day,” Dobbins said. “I’m back to my old self. This is tough because I pride myself in being a game breaker, a playmaker. But I know the organization is trying to be safe with me, and even though I don’t realize it sometimes, I’m glad to be part of an organization that takes care of its athletes.”