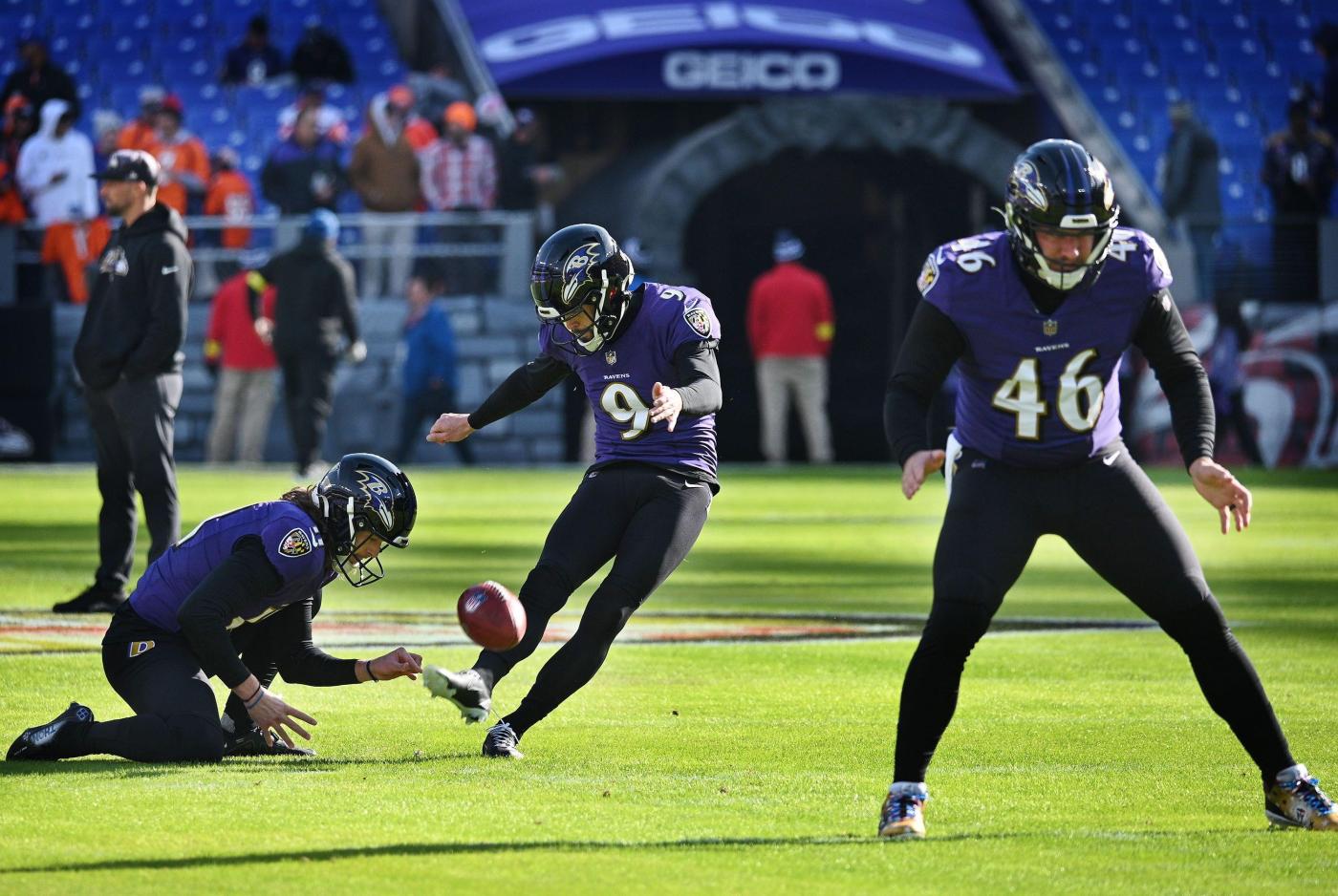 Tyler Huntley looks like Lamar Jackson. He talks like him, and has a similar playing style. So when he was called on to replace the injured Jackson to start the first quarter of the Ravens’ 10-9 win over the Denver Broncos on Sunday at M&T Bank Stadium, it was no big deal.

I’ve said it before and I still believe it: Huntley, in his third season, is the ideal backup for Jackson in this ugly offense. With the exception of tight end Mark Andrews, the Ravens don’t have any big-time receivers.

Their running game has been held in check for the last two weeks even with halfback Gus Edwards back in the starting lineup, and the Broncos pushed the Ravens’ offensive line all over the field, finishing with four sacks.

So, the Ravens had to call on Huntley like they do Jackson. In their run-oriented offense, their best play, regardless of who’s starting, is for the quarterback to run around and make plays.

In the movie “Forrest Gump,” Jenny yelled at the main character to “run, Forrest, run.” That has basically become the mantra for Jackson during the last five seasons in Baltimore.

And on Sunday, it was run, Tyler, run.

It follows Ravens offensive coordinator Greg Roman wherever he goes. First, it was in San Francisco when he was calling plays for the 49ers with quarterback Colin Kaepernick. Then it was in Buffalo with former Ravens backup Tyrod Taylor.

So, when Jackson was pummeled by outside linebacker Jonathon Cooper with 14 seconds remaining in the first quarter, Huntley was the perfect replacement.

He completed 27 of 32 passes for 187 yards and finished with a passer rating of 78. He had one bad interception that probably would have been returned for a touchdown if safety Justin Simmons didn’t trip and fall at the Ravens’ 40-yard line midway through the third quarter.

Huntley also made a poor decision when he threw an underhand pass at the Ravens’ 26 with 3:13 left in the game, but he was just doing a Jackson impersonation.

He saved his best for the 16-play, 91-yard game-winning drive. Huntley finished the game with a team-high 41 rushing yards on 10 carries and got the Ravens a first down on a fourth-and-2 at the Denver 18 with 1:06 to go. Then he scored the game-winning 2-yard touchdown by going over the right side out of the shotgun formation with 28 seconds left.

It’s safe to conclude that the Ravens probably wouldn’t have won if Jackson had remained in the game because he would have gotten beaten down by Denver’s relentless pass rush. He had already been dealing with injuries to his hip and quadriceps that had forced him to miss some practice time over the past two weeks, and Jackson probably wouldn’t have lasted three quarters with the way the Broncos were getting after the quarterback.

But Huntley had fresh legs. When outside linebacker Jacob Martin kept collapsing the pocket from the left side, Huntley outran him around the corner to either complete a pass or pick up several yards with his feet. Most importantly, he wasn’t going to take a sack.

It was very Jackson-like but without the big, explosive, potential game-changing running plays.

But Huntley has a stronger arm than Jackson. On his first pass attempt, he completed an 11-yard strike to wide receiver Devin Duvernay on a comeback route. That’s not a regular part of Jackson’s arsenal.

Huntley stayed within the Ravens’ playbook. He threw a lot of short passes to receivers Demarcus Robinson (seven catches for 41 yards) and Duvernay (six catches for 34 yards). He even went to his check-downs, running backs Kenyan Drake and even Justice Hill, which Jackson did not do much of in the first quarter.

But he also stayed with Andrews, the team’s go-to receiver who had four catches for 53 yards and also drew a pass interference penalty on cornerback Patrick Surtain II on a third-and-5 on the game-winning drive.

Good backup quarterbacks are hard to find in the NFL, which is why all the trade talk involving Huntley at the end of last season made no sense. It’s even better when the backup has a similar style as the starter because it doesn’t take much away from the offense.

Right now, the Ravens are a broken offensive team and I’m not sure they can be fixed. But with Jackson out and no timetable for his return, it’s comforting to know that Huntley is more than capable.

He has the same playing style.