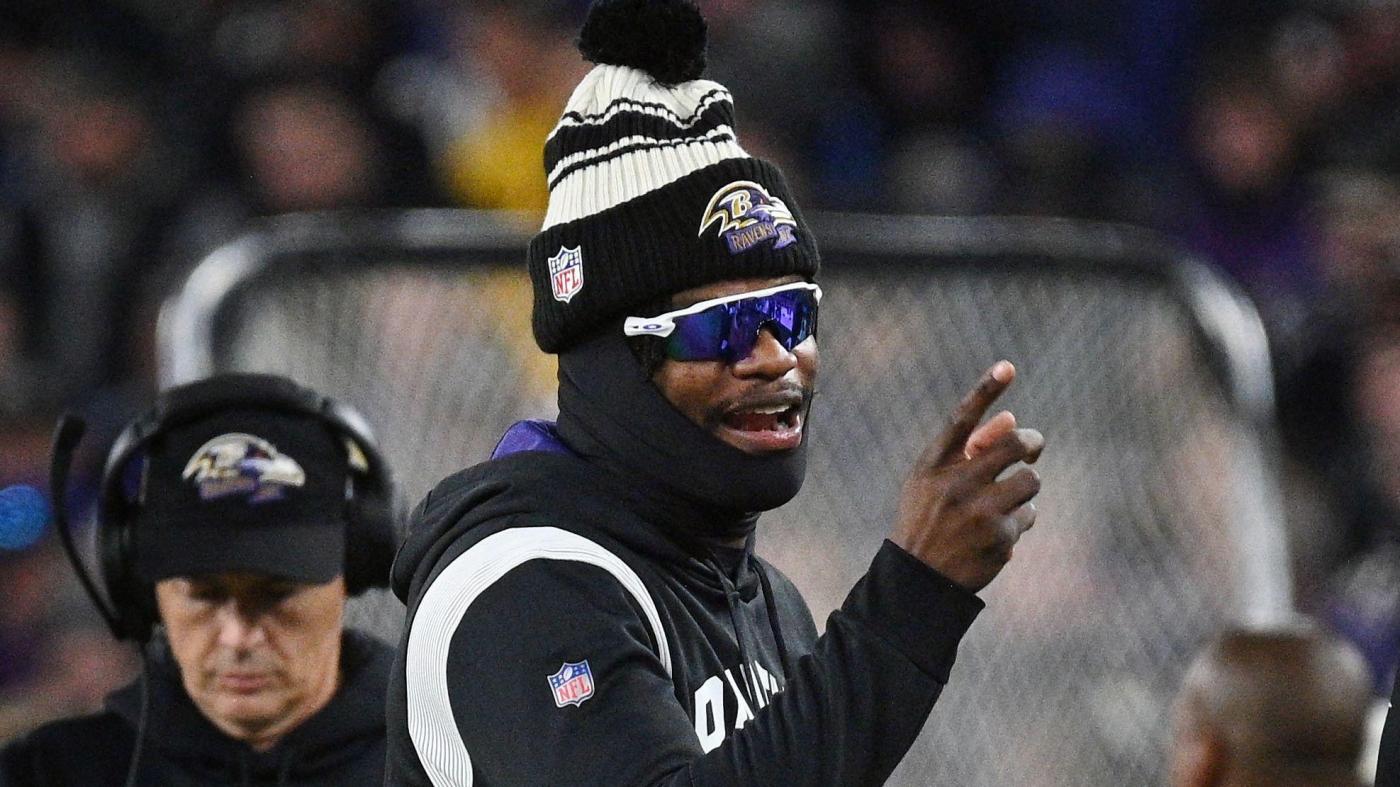 Baltimore Sun columnist Mike Preston will answer fans’ questions throughout the Ravens season. After Baltimore fell to the Pittsburgh Steelers, 16-13, on Sunday night, plenty of questions remain before a Week 18 matchup against the Cincinnati Bengals.

Bob, it all depends on the negotiations, with what team and what that team’s history is in making trades. Some teams, like the Los Angeles Rams, are willing to part with draft picks and others, like the Ravens, believe you build through the draft. I am sure that after two years of negotiating with Jackson, Ravens general manager Eric DeCosta has sent out enough trial balloons to know what he can get for Jackson if the team decides to trade him.

Also remember there might not be as many teams willing to trade for Jackson as some might think. He is a great runner but only an average passer, so he has to play in a certain system or within a particular framework. At this point, it’s too early to predict what will happen but I assume DeCosta has done enough homework to pull the trigger on a trade if necessary. I assume there will be teams willing to give up several first-round picks for Jackson.

When it was recently announced that Ed Reed was named the head coach at Bethune-Cookman, John Harbaugh was ebullient in his praise of the Ravens Hall of Famer and “coach on the field,” who was known for his film study. Since Harbaugh has such a high opinion of Reed, do you know if there was ever an effort to get him on the Ravens staff? If not, what does that reveal about the leadership and dynamics of the coaching staff under Harbaugh? Thanks for all of the insights you provide.

I am unaware of Harbaugh ever offering Reed a position on his staff. In fact, I have rarely seen Reed, Ray Lewis or Jonathan Ogden at the team’s training complex since they retired. I think all three have solid relationships with Harbaugh, but it was Harbaugh who ran out the players with strong personalities after the team won the Super Bowl in 2012. In regards to Lewis and Reed, I think they respect Harbaugh, especially for what they accomplished in winning the title, but I don’t believe they will be inviting each other to dinner anytime soon.

As for his current staff, and even the players, I believe Harbaugh likes to be the dominant personality, and it serves him well. But it’s hard to win titles without alpha males, and the Ravens’ haven’t come close since those guys left in 2012. Harbaugh believes in the team chemistry philosophy and he works it well, but the best coaches know how to deal with the high-maintenance players and get them on board as well.

As for Reed as a head coach, that’s going to be interesting. I’ve had my ups and downs with Reed but we share a mutual respect. I think there is a soft side of the guy that he doesn’t like to show, but it will serve him well in dealing with college players. No one can ever question his love for the game.

The Ravens have tried to manage the salary cap by having a cheap/rookie as a backup quarterback at different times (Troy Smith, Tyrod Taylor, Tyler Huntley/Anthony Brown). Given that Lamar will have missed multiple games in back-to-back seasons now, would it be in their best interest to have a more serviceable backup next season? Or is it just as simple as saying it doesn’t matter who your backup is, if you have to rely on him for multiple games, you probably won’t do well anyway? For the record, if Lamar isn’t playing against the Bengals, I think they should just go ahead and start Anthony Brown at this point. Thanks.

I think whichever quarterback is healthy will start. I don’t know how long Jackson will play if healthy, but I believe the Ravens want to get him out on the field. As for a quarterback, I think the Ravens will select one in the draft and there is a definite need. When the Ravens drafted Jackson, there were some who said his chances of getting hurt wouldn’t increase but it was ridiculous then and even worse now. Just look at the system. Not only has Jackson missed substantial playing time the last two years but Huntley has a banged-up shoulder as well. You just can’t keep running option plays with quarterbacks.

As far as Brown, I thought he played well in the preseason but the Ravens need to gear up for a postseason run, not gear down. The key word here is balance. They don’t need to light up the field with a downfield passing game but at least put fear in a defense. Also, finding a running quarterback isn’t hard, which is why it’s easy to find one and on the cheap.

Our current offensive game plan is built to restrict Huntley since he is the backup, and our wide receivers and not that good. Keep running the ball. But that reduces our players to their weakest level. Why not open up the playbook a bit and see what they can do? We only throw the ball exclusively in passing situations, never on third-and-1 when the D-line is stacked because they know it’s a running play. And when was the last time we saw a deep ball on second-and-4? Give the receivers a chance to succeed before we write them off.

Peter, I understand why the Ravens went conservative after the New York Giants game in which Jackson committed two costly turnovers. I agree, at least to a point, with them running so much because that’s their strength and they were going to beat a lot of bad teams they faced by wearing them down in the second half.

But it’s a different game in the postseason, where they are going to be facing the league’s top quarterbacks in Kansas City’s Patrick Mahomes, Buffalo’s Josh Allen and Cincinnati’s Joe Burrow. So, I predict they will open it up more offensively in the playoffs but I’d like to see more of that approach in Sunday’s game against the Bengals. They might as well get ready.

Hi Mike, John Harbaugh looks irritated and exhausted by the excruciating losses and the daily Lamar Jackson drama, which probably won’t end anytime soon. I’m sure he won’t like Steve Bisciotti telling him to fire Greg Roman and he must be tired of answering questions about the poor wide receivers Eric DeCosta saddled him with. He’s been in the league a long time and it’s a mental and physical grind. Do you think he might call it quits with the Ravens after this season?

Harbaugh has a contract that carries him through the 2025 season and I don’t see him walking away. Harbaugh is old school, loyal and a fighter. Of course he looks tired and exhausted. What coach doesn’t near the end of any season, regardless if you have a winning or losing record? Coaching on just about any level is a grind, especially if you do it right and care. It’s even harder on the major college and NFL level because you have to deal with so many people and players.

I don’t see Harbaugh walking away unless it was about family and overall, despite the recent criticism, I still think he is a very good football coach. He has weaknesses, but all coaches do. A major key is compensating for weaknesses.

Mr. Preston, I believe Tom Brady used to take a lower salary than he could have demanded so that the Patriots had more money/salary cap room to bring in other players (aka weapons) who could make the team more competitive. Is there any chance Lamar Jackson might consider doing something similar? Thanks for your great reporting in The Sun.

Dawna, no. If you believe that would happen then you believe in Santa Claus and the Easter Bunny. Thanks for the compliments.

I was wondering if you thought Lamar would have more success in Kyle Shanahan’s zone offense that could play more into Lamar’s athleticism and strength as a middle-of-the-field passer? Also, is this an offense the Ravens coaching staff would consider in the future?

I think any quarterback would have success in Shanahan’s offense because he has one of the best offensive minds in the NFL. I’m not sure how much Jackson would improve but I’d like to see the Ravens move in a different direction as far as having someone direct the offense. If you’re going to possibly place the franchise tag on Jackson, then the team needs a new voice and direction. If it’s broke, fix it.