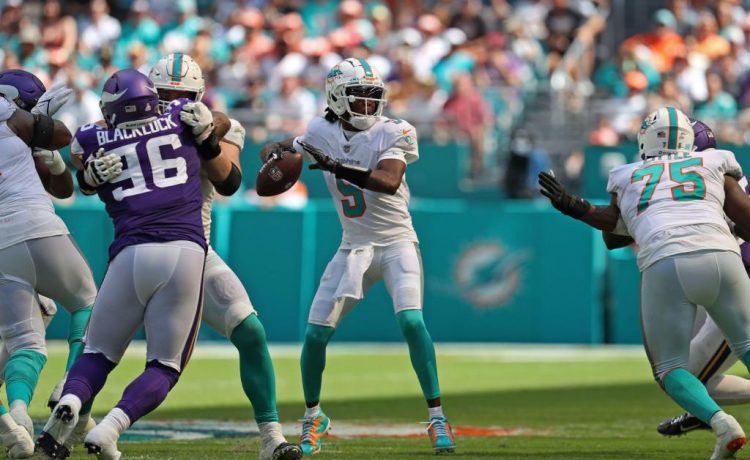 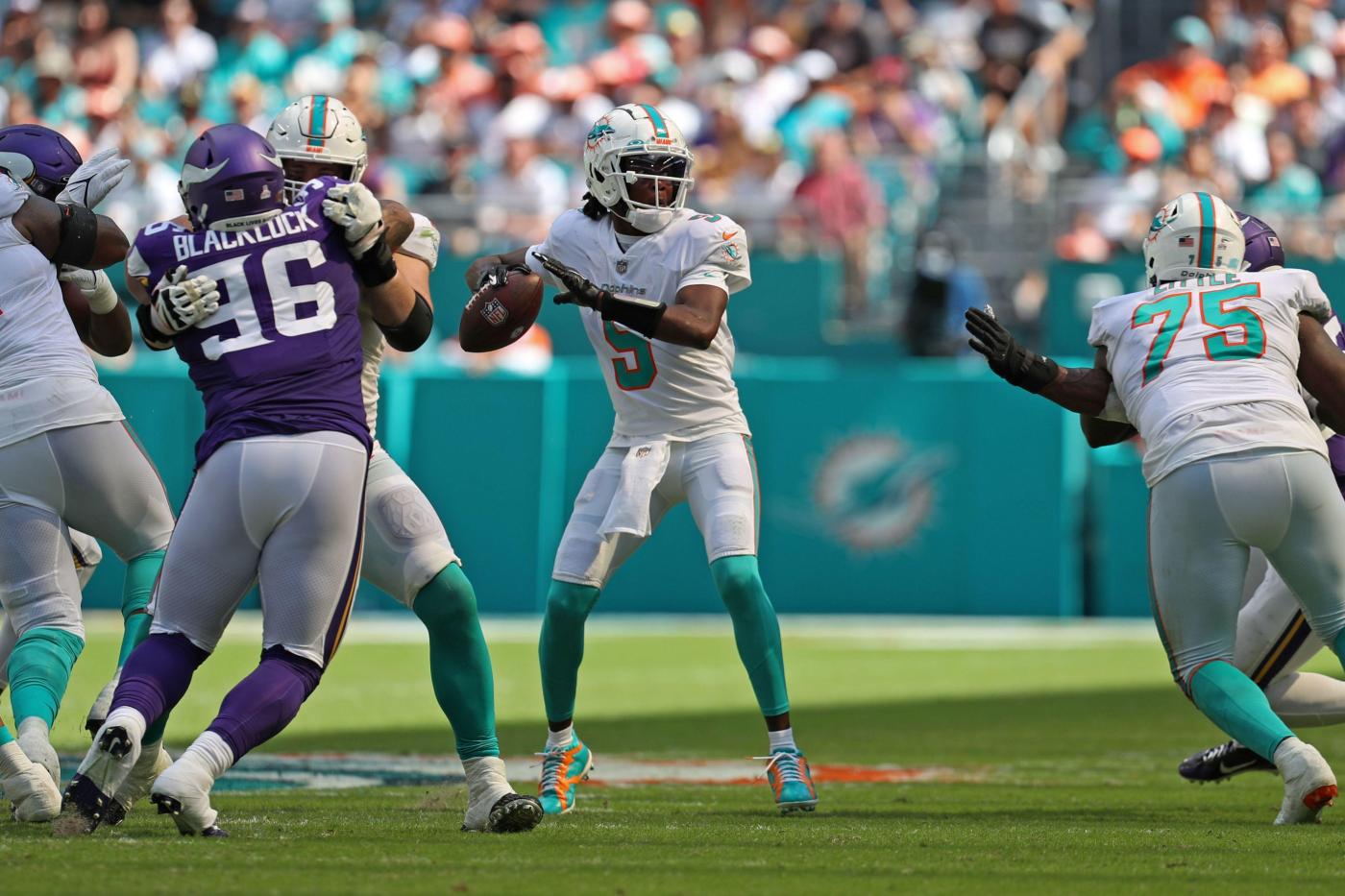 Look at the statistics sheet and it looks like a winner.

That’s what happens when you have 10 penalties (for 97 yards) and three turnovers and can’t close out another game in the fourth quarter. Their 3-0 start is now a 3-3 season.

1. Play of the game: With the Dolphins driving for a go-ahead score with about three minutes left, Teddy Bridgewater faced a second-and-14 and threw over the middle to Jaylen Waddle. The receiver cut upfield and had the 14 yards for a first down when was hit and fumbled. Minnesota recovered at its 26-yard line and returned to the 41. Two players later, Minnesota had a game-sealing touchdown and one of Waddle’s questions got underlined. He dropped a ball earlier that was intercepted. Hill had five catches for 80 yards, but the two turnovers are what impacted the game most.

2. Stat of the game: The Dolphins used two quarterbacks for the third straight game. You know how they say injuries are part of the game? They’re part of every game for Dolphins quarterbacks. Skylar Thompson looked on his way to proving why Mike McDaniel started the seventh-round rookie in Sunday’s first half. His stats of 7 of 13 for 89 yards hardly told the story. Two passes were dropped. A few other big plays were called back by penalty (see No. 5). He then appeared to bang his thumb on a Vikings helmet on following through a pass and he was done for the day. In came Bridgewater, who was cleared of concussion protocol on Saturday despite never having a concussion (we don’t need to get into all that again, do we?). Bridgewater struggled at the start, as might be expected for a quarterback who couldn’t practice much this past week and had one aborted play all season. He finished strong in completing 23-of-34 passes for 329 yards two touchdowns and two interceptions. If not for that Waddle fumble, he’d have had a chance to win it.

3. Right until the very end when Dalvin Cook broke a 53-yard run after Waddle’s fumble, the Dolphins defense kept them in the game. Take its work after a faked punt got stopped short at the Dolphins 33-yard line in the third quarter of a 10-3 game. Christian Wilkins stopped a receiver screen for minus-6 yards. Wilkins then stopped Cook for a one-yard loss. After an illegal procedure penalty on Minnesota and an incompletion, Minnesota faced fourth-and-22 and more importantly was pushed out of field goal range. The defense did this almost all day. Minnesota didn’t get its initial first down until late in the second quarter. But it often was the position it was put in. When Waddle dropped a pass that was intercepted at the Miami 41 just before half, Minnesota just got a field goal. There were only 15 seconds left in the half on that possession so a better example was when a Minnesota punt return gave it the ball at the Dolphins’ 49 in the third quarter. It ended up losing seven yards that possession thanks to a sack by Raekwon Davis. The defense did everything but …

4. Stat of the Game II: Minnesota 3-0 on takeaways. That’s a reflection of both sides for the Dolphins. The offense was loose with the ball with Waddle responsible for two turnovers. It’s the third straight game the defense didn’t get a takeaway. The Dolphins are now minus-5 on turnovers for the season, which is often a good reflection of how the year is trending.

5. Did you see the most frustrating Dolphins non-drive in, oh, the last decade on Sunday? It summed up how they could have great statistics and lose. On their second possession Sunday, the Dolphins started at their 17-yard line and their first three plays were a Thompson pass for 30 yard to Waddle, a Raheem Mostert run for 16 and then a pass to Tyreek Hill for 9. After a 3-yard run, they had first-and-10 at the Vikings 24. That’s where things got, uh, interesting. Here are the highlights:

* First-and-15 at 29: Thompson pass to Trent Sherfield for 20 yards is called back when center Connor Williams is flagged for illegal man downfield;

* First-and-20 at 34: Thompson pass to Robert Cracraft for 30 yards to the Minnesota 2-yard line is called by holding penalty on guard Liam Eichenberg;

* Second-and-12 at 26: Pass to Hill for 9 yards called back by offensive-interference penalty by Alec Ingold;

* Third-and-22 at 36: Thompson pass to Waddle for 6 yards called back by holding on Sherfield.

That’s not just five penalties in seven plays from scrimmage. That’s 65 yards of offense being negated by those penalties. The Dolphins turned a sure field-goal attempt, and possibly touchdown a couple of times, into a punt.

6. The Dolphins have injuries at quarterback, tackle and now the cornerback position was down to crumbs thanks to injuries. In the second half, when the defense was put in bad positions, Noah Igbinoghene was at one cornerback and Justin Bethel was in on some packages for the first time this year. That’s because rookie Kader Kohou was out this game, Nik Needham was lost in the first half and taken out on a stretcher with a bad ankle injury and Keion Crossen was ruled out for the second half with a knee injury. The depth at cornerback was a question coming into this season with Byron Jones out. The undrafted Kohou provided some relief there. But you can bet the Dolphins will be scouring for help either on practice squads or as the trade deadline approaches.

7. The weekly Tyreek-Hill-is-a-beast note. Minnesota defense had one rule Sunday: Don’t let Hill or Waddle get deep. Its safeties lined up most plays in Broward County. Hill still had insane impact on the game in catching short passes and zipping through the secondary. He had 12 catches for 177 yards and much of them were after the catch. Biggest play? On fourth-and-5 at the Miami 48 with just over six minutes left, McDaniel went for it and Bridgewater’s pass to Hill ended with a 14-yard gain. For a guy on the injury report this week, Hill was a dominant player just as he has been all season.

9. … continue to have problems. Two aforementioned plays in the third quarter continued that narrative with the missed field goal. A fake punt where a snap to short back Clayton Fejedelem came up short. A 25-yard punt return put Minnesota at the Dolphins 49-yard line. Throw in Minnesota punter Ryan Wright’s 73-yard punt that reversed the field in the first quarter – plus his six punts inside the 20 – and it was another day the special teams lost their battle. For a team with injuries, special teams needs to win some of these days.

10. Next week: Steelers at Dolphins. It’s the lone prime-time game that’s scheduled for the Dolphins and the plotline is the obvious one. Former Dolphins coach Brian Flores returns to Hard Rock Stadium and it’s a complicated return. Flores’ 24-25 record with the Dolphins was better than the roster deserved or the organization wanted in the case of his first tanking season. His larger problems were simply getting along with people. He fired more coaches in a shorter span than any Dolphins coach, starting with his offensive line coach four practices in. He then made the Dolphins not only part of the lawsuit against the NFL for racial discrimination but exposed the team’s desire to tank by saying owner Steve Ross offered him $100,000 for each loss and it also tampered with a big-time quarterback who was clearly Tom Brady. Welcome back?