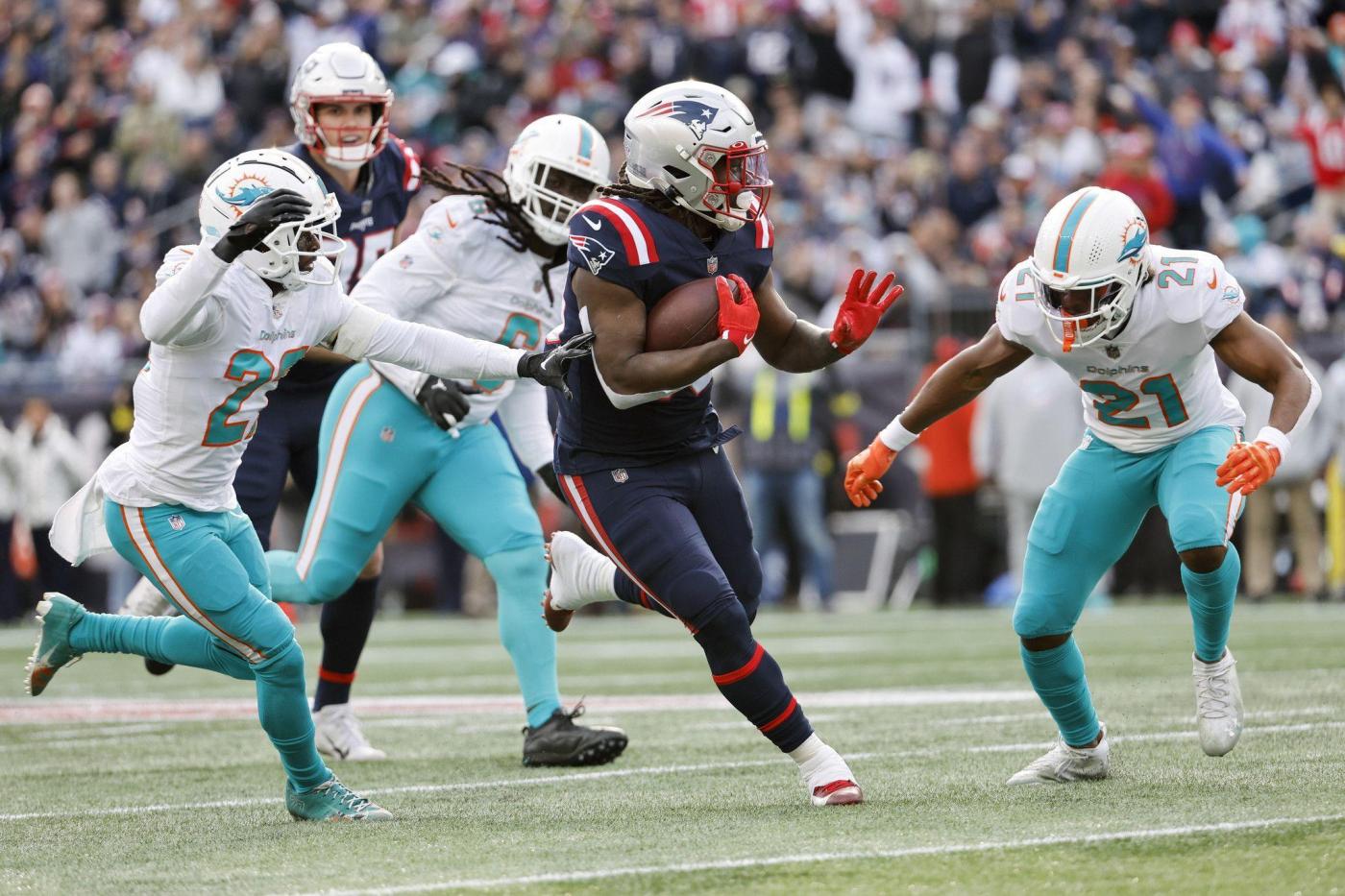 The Miami Dolphins lost four of their top stars with injuries before the game, lost another quarterback in the game, lost their fifth straight game on Sunday and also lost their control of the playoff situation.

That’s a lot of losing on what was an awful 23-21 loss to New England in Foxborough.

Remember when this team was 8-3? That actually happened, right?

Here are 10 thoughts on Sunday’s game:

1. Stat of the day: Dolphins two turnovers, Patriots zero. Yes, fundamental football played out this day. Grind-it-out offense. Special teams werre important. But it came down to what these games typically come down to in the turnovers. The Dolphins threw two interceptions, one by Bridgewater returned for a touchdown, and Patriots quarterback Mac Jones looked like a disaster at times but threw no interceptions. Sometimes you aren’t defined by the best plays you make but by the worst ones. That was the case this game. The Dolphins entered Sunday ranked 30th with 14 takeaways and tied for 28th at a minus-five turnover margin (now minus-seven).

2. It was quarterback revolving door again for the Dolphins. You can’t make this stuff up. With Tua Tagovailoa out, Bridgewater started and looked fine, completing 12 of 18 passes for 161 yards and a touchdown late in the third quarter. Then he threw his 19th pass and everything changed. It was intercepted and returned for a touchdown by Patriots cornerback Kyle Dugger and a 16-14 New England. Bridgewater hurt his hand on the play, too, and Skylar Thompson replaced him. On his first series, Thompson threw a pass that Tyreek Hill could have caught but tipped into the air and the Patriots’ Jonathan Jones intercepted. Bridgewater and Thompson seem a matched pair. When one starts, the other ends up finishing. The Jets. The Vikings. Now the Patriots. The question coming up is if Thompson will be starting Sunday’s game against the Jets that’s possibly for the season.

3. The playoffs? What was assured a month ago isn’t so easy a proposition now. With Sunday’s loss, the Dolphins also lost control of their playoff fate. If New England wins in Buffalo next week, the Patriots get the seventh and final spot. That game might mean something to the Bills for playoff seeding depending in part on their Monday night game against Cincinnati. If New England loses in Buffalo, the final playoff spot goes to the winner of the Dolphins-Jets game next Sunday in Hard Rock Stadium.

4. The Dolphins were without four of their arguably top eight players to injury. Tagovailoa, left tackle Terron Armstead, cornerback Xavien Howard and edge rusher Bradley Chubb were big investments to get to games just like Sunday with playoffs on the line. Each also came at a big cost despite previous injury concerns. Armstead, for example, has missed an average of five games a season when the Dolphins signed him to an $18 million-a-year free-agent deal last off-season. He toughed through a toe, pectoral and ankle problems until this week when an added hip problem evidently made it too much. So while you could say it’s bad luck all are injured – Howard had seemed to shake his knee problems the last couple of years – you had to wonder when this risky architecture would come with a price. It did Sunday.

5. McDaniel obviously thought he needed to run more this day. The Dolphins had running plays on 12 of their 13 first downs in the first half. It wasn’t productive running as they had 19 carries for 62 yards in the half (3.3-yard average). It still helped Bridgewater and the defense, as the Dolphins offense was on the field 19 minutes, 28 seconds to the defense’s nine minutes and 32 seconds. That suggested the Dolphins had good control of what might happen in the second half but … two interceptions changed all that.

6. One question was how the Dolphins offensive line would hold up against the Patriots’ fifth-ranked defense (and third in sacks). Left tackle Kendall Lamm, signed in late November to the practice squad, started Sunday in place of Terron Armstead, who was inactive with injuries, and Greg Little, who was active but suffered a foot injury in Friday’s practice. Lamm then left with an apparent knee injury in the second quarter and Little came on. Throw in left guard Liam Eichenberg,who returned for his first game in eight weeks, and you can see the concerns against a top defense. And? Well, the offensive line wasn’t great but wasn’t noticeaby bad, either. Bridgewater was sacked once. The rushing game was ambitious with a season-high 27 carries for 83 yards. The point is, considering its issues and opponent, the offensive line just fine.

7. Here’s how you try to win a field-position game. Thomas Morstead punted 51 yards and starting middle linebacker Elandon Roberts made the punt-coverage tackle at the Patriots 10-yard line. The defense held the Patriots to 3 yards. (Mac Jones looked a disaster). Former Dolphins punter Michael Palardy punted 38 yards, and Cedric Wilson returned 10 yards to the Patriots 41-yard line. All that’s a long way of saying in a field-position game, the Dolphins special teams had some notable plays. On that short field Sunday, the Dolphins offense needed five plays for Bridgewater to shot-put a 2-yard touchdown to Raheem Mostert and go up, 14-7.

8. Bring out the wheelbarrow again for Mike McDaniel. Fourth-and-1 from the Dolphins 36. Of course he went for it. There was an odd build-up to that play, though, as the Dolphins first were confused about lining up and took a time-out. Then there was a false start. The punt unit came on – and the Patriots ran into punter Thomas Morstead. So it was fourth-and-1 again, the offense came out and Jeff Wilson ran two yards for the first down. That kept alive the drive for the Dolphins’ first touchdown to tied it up at 7-7. The Dolphins are 11-for-20 on converting fourth downs this year …

But … McDaniel is 0-for-four in instant-replay challenges this year after a first-quarter challenge that wasn’t successful. On second-and-8, Jones lofted a pass near the sideline to Tyquan Thornton, who made a catch similar to Tyreek Hill on the Dolphins opening drive but was ruled out of bounds. This one to Thornton, ruled a catch, came to milli-seconds of him not competely picking up his lead foot as he caught the ball. So the Dolphins challenge was unsuccessful, Thornton had a 24-yard catch and went on to catch a 7-yard touchdown at the end of that drive for a 7-0 Patriots lead.

9. On the game-cementing touchdown, Patriots receiver Jakobi Meyers was matched out wide against linebacker Duke Riley on third-and-1. Jones went right at that for the touchdown.

Thomas Morstead has 23 punts inside the 20 this year after one to the 2-yard line late in the first half.

Odd stat: when Patriot kicker Nick Folk missed a point-after attempt in the third quarter, it was the fifth extra-point miss in th past two games at that end of the field.

10. Next week: Jets at Dolphins. The exact consequences of the regular-season finale will depend on the New England-Buffalo game. But the Dolphins have to prepare as if it’s for the season. The Jets game at Seattle on Sunday is meaningless in the playoff picture. The Jets beat the Dolphins in October, 40-17, in a game where Bridgewater played one snap before being removed by the NFL’s concussion spotter. Thompson entered the game – just as he might next week.