Morocco beats Spain on penalties to advance at World Cup 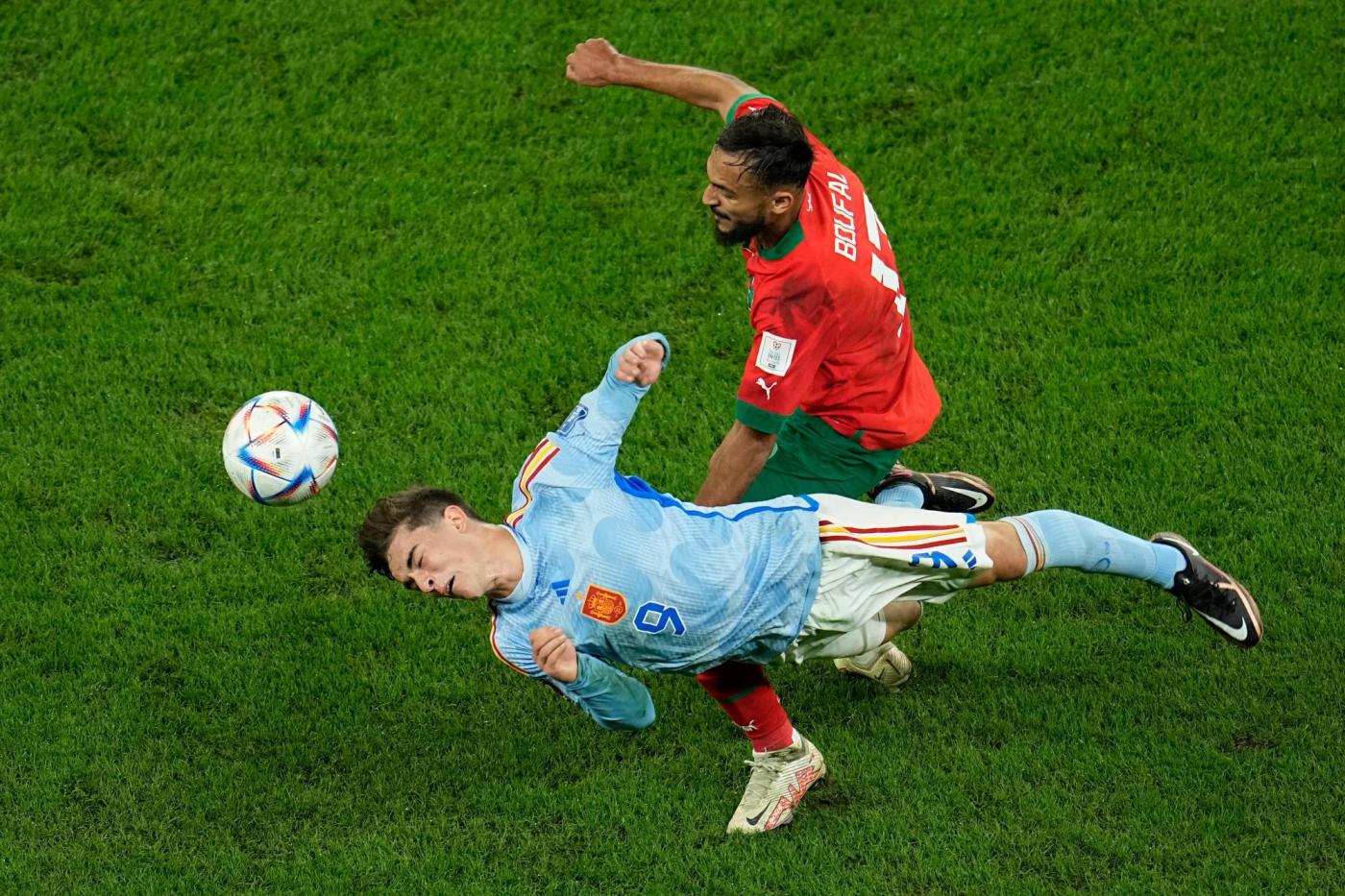 AL RAYYAN, Qatar (AP) — Morocco became the first Arab nation and only the fourth African nation to advance to the World Cup quarterfinals, beating Spain 3-0 in a penalty shootout on Tuesday.

Achraf Hakimi, who was born in Madrid and previously played for Real Madrid, converted the deciding penalty in the shootout. Abdelhamid Sabiri and Hakim Ziyech, who returned to the national team after a dispute with the previous coach, also scored for Morocco.

Pablo Sarabia, Carlos Soler and Sergio Busquets missed their penalties for Spain, with Sarabia hitting the post and Morocco goalkeeper Yassine Bounou stopping the other two.

The teams drew 0-0 in regulation and extra time.

Sarabia had entered the match in the final minutes of extra time, apparently for the shootout. He replaced Nico Williams, who had also come in as a substitute earlier in the match.

Morocco has been the biggest surprise of the tournament and will next face either Portugal or Switzerland.

Morocco is also the only team from outside Europe or South America to make it to the last eight. The team made the round of 16 once before, at the 1986 World Cup in Mexico.

Spain was eliminated by host Russia in a penalty shootout at the 2018 World Cup, and by Italy in the semifinals of last year’s European Championship.

“We were unable to score … so no matter how much we say that we deserved to win for the chances we created and for playing more in their area, it is not going to change anything,” Simón said. “The only thing left for us is to accept that we have been eliminated.”

It was the fifth straight time Spain played extra time in a knockout round of a major tournament. The team played 120 minutes against Russia and in all three of its knockout games at Euro 2020.

Morocco and Spain are close neighbors with a complex geopolitical relationship.

Cameroon, Senegal and Ghana are the only other African nations to reach the World Cup quarterfinals. None of the three advanced to the semifinals.

Moroccan fans significantly outnumbered — and were louder — than the Spaniards at Education City Stadium.

Neither team was able to create many significant scoring chances. Morocco seemed satisfied to keep Spain controlling possession and looked to threaten on counterattacks

Both teams had a few opportunities in extra time, with Spain closest to scoring with a last attempt by Sarabia that clipped the post.

It was the second last 16 match to go into extra time at this year’s World Cup. Croatia beat Japan on penalties Monday.