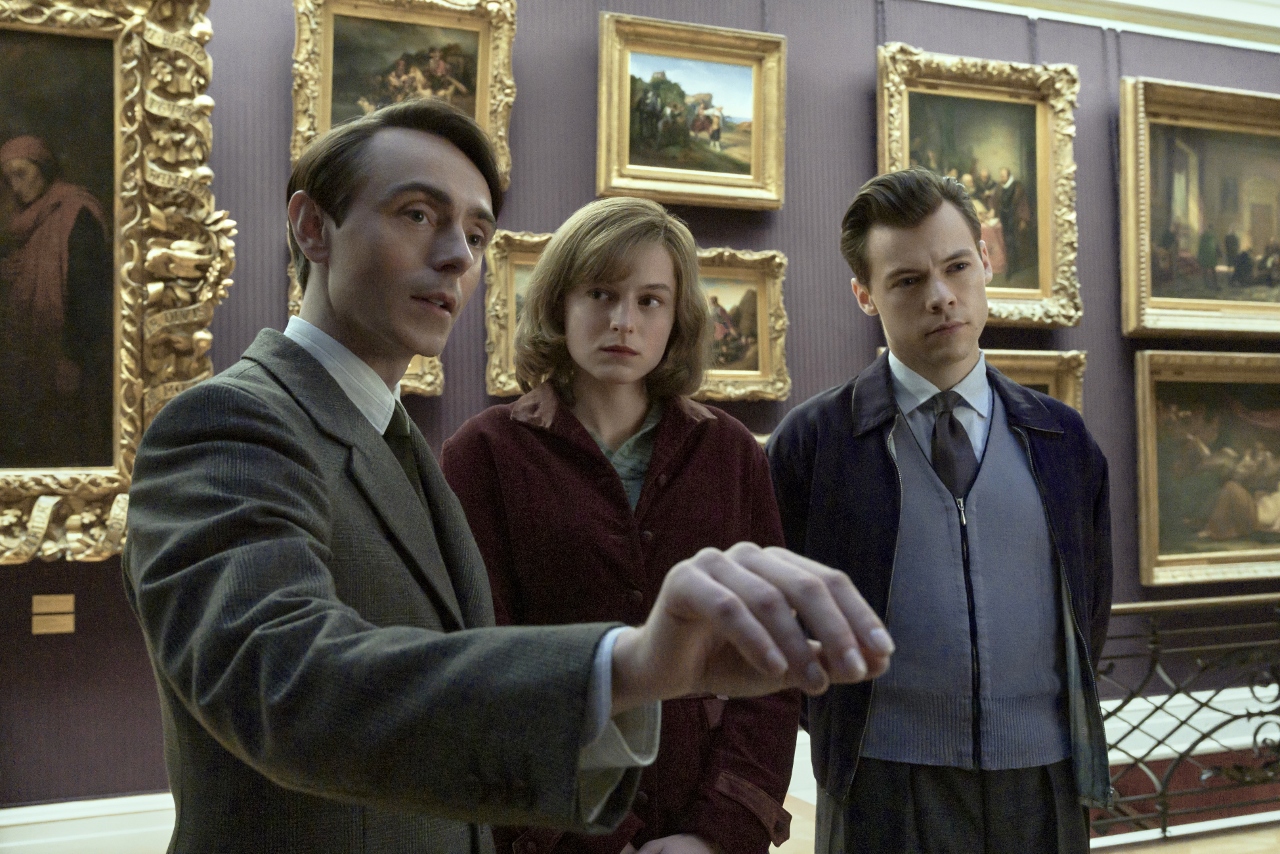 “My Policeman” is a decidedly queer movie with a story that initially sounds mighty familiar but then offers enough thoughtful surprises and probing questions to make it work.

The obvious attraction here is gender-bending pop star Harry Styles as Tom Burgess, the gay cop of the title.  Tom is actually bisexual which isn’t much of a help in 1957 Brighton where its picturesque seaside views contrast with the brutal discrimination, cultural disdain and physical violence gay men face daily.

As it begins “My Policeman” suggests a reprise of the now-familiar portrait of a young man like Tom discovering his homosexuality and choosing to come out or not. Instead, it tells a Then and Now story. In the ’50s Tom, eager, open-minded and curious about culture, befriends Patrick Hazelwood (David Dawson), a gay curator at the Brighton Museum.

What’s intriguing is that as Tom awakens to Patrick’s desires, he has no conflicts about being happy in bed with a man. At the same time he’s pursuing virginal Marion Taylor (Emma Corrin, the sensational Princess Diana of “The Crown”) whose cultural yearnings make her the perfect complement to the curator. When “My Policeman” flips ahead to today, we see an aged, decidedly infirm, wheelchair-bound Hazelwood (now played by Rupert Everett) taken into Marion (Gina McKee) and Tom’s (Linus Roache) house.  Tom is so furious that his wife has done this, he refuses to speak to his old lover, long out of prison.

All three we realize saw their lives basically ruined by what happened back in the ’50s.

“My Policeman” doesn’t probe deeply enough into what’s up between these three. It’s certainly odd that Patrick would show up on Marion and Tom’s honeymoon to cook dinner and spend a night. How willful is Marion being by keeping a blind eye to what’s happening between her husband and this cultured, fun man who, it seems even if it’s never stated outright, is upper class?  What does Tom think he can get away with once he’s married?  Can he really go off for a Venice holiday with Patrick, leaving Marion not just to stew but explode with righteous anger?  Can he treat her as a fool and expect their lives to remain unchanged?
And today when Marion brings poor ruined Patrick into their house, is she really doing so out of revenge? And on who, her husband or his lover?

“My Policeman” is a much-needed reminder of the persecution gays and lesbians endured then – and today, as well as a warning that the choices we make, whatever the circumstances, will always have consequences.

Rated R.   At the Kendall Square Cinema and suburban theaters