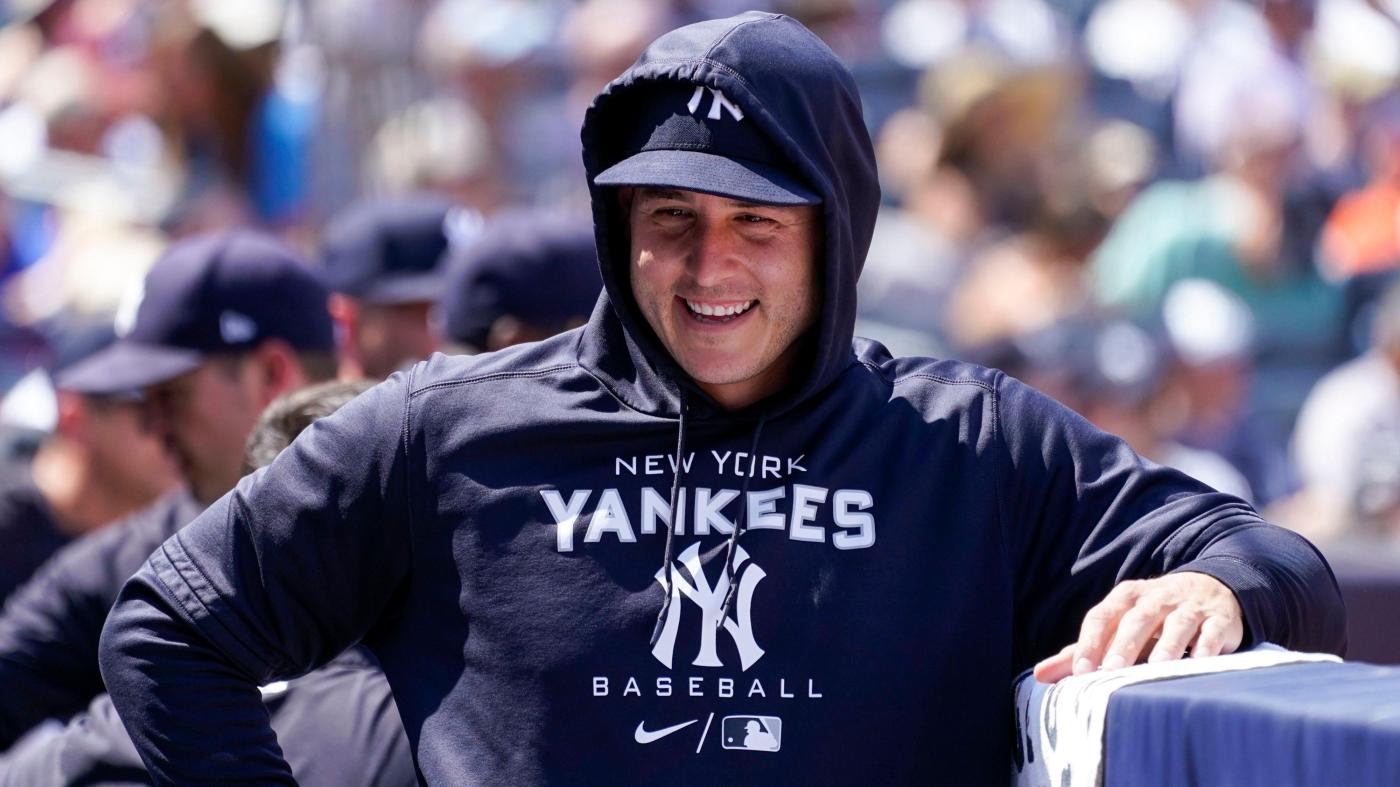 ST. LOUIS — As expected Anthony Rizzo missed his third straight game with lower back tightness on Sunday. The first baseman had the back “spasm,” and “tighten,” between batting practice and first pitch on Friday.

“He was doing his best Matt Carpenter out there trying to get one with the earth,” Yankees manager Aaron Boone said of Rizzo stretching and doing yoga on the field before the game.

Rizzo said after the Yankees 12-9 loss to the Cardinals he would not have been able to play Sunday, though he is feeling better than he did Saturday.

“You kind of know when it’s (at the point of benign) manageable and just like I said yesterday we’re just being smart,” Rizzo said.

Rizzo missed four days with back spasms last month. At the time, the 32-year old said it was an issue he usually had once a year. This is the second time it has popped up in a month. Saturday night, Rizzo said he is always concerned when it limits him and he is unable to play, but that it was starting to loosen up.

The Yankees have a four and a half hour flight to Seattle after Sunday’s game, so Rizzo’s availability for Monday’s series opener against the Mariners is in question, too.

“Whenever you can’t play—winning or losing—it sucks, so we’re in a skid right now,” Rizzo said after the Bombers’ season-high fifth straight loss. “It’s part of baseball and it’s better to happen now than later.”

A MAN WITH OPTIONS

Ron Marinaccio has been nothing but brilliant since he returned to the big leagues in late May. The right-handed rookie had allowed one earned run over his last 19 appearances and had an 0.46 ERA since giving up three runs in 0.2 of an inning April 28.

Still, he was the odd-man out when the Yankees had to make a move to put Frankie Montas on the 26-man roster. It’s a simple problem for Marinaccio, he still has minor league options and was the only pitcher the Yankees could remove from the roster without risking another team picking them up.

So, Boone was blunt with him Saturday night when he was told he was heading back to Scranton.

“Honestly, a little bit of a similar conversation that I had with Clarke Schmidt,” Boone said. “They are two guys that have certainly proven that they can pitch up here and pitch well up here and have certainly been a factor for us winning games this year and having this season. But also understanding we’re not in a position right now to be getting rid of pitchers to make room and unfortunately for them it’s that point in their career where they have options.

“Also, it’s an important time for them to go down and continue to really build on what’s been a really good season for him,” Boone continued. “Making sure he knows that he’s still got a real chance that not only impacts us the rest of this regular season, but even hopefully heading into a postseason situation. I try to accentuate the positives of what he’s doing this year and really establish himself in his career.”

Aaron Judge’s four RBI Sunday gave him 97 on the season, breaking a tie with the Mets’ Pete Alonso for the most in the big leagues. …. DJ LeMahieu had three hits, including a ninth-inning home run. It was his 12th of the season and the first the Bombers, who lead all of baseball in home runs, hit off the Cardinals this weekend. Aaaron Hicks snapped an 0-for-32 streak with a season-high-tying three hits. … Andrew Benintendi had his first multi-hit game with the Yankees and his first since July 25 with the Royals against the Angels. Boone and pitching coach Matt Blake were ejected in the fifth inning. It was the sixth ejection this season for Boone.