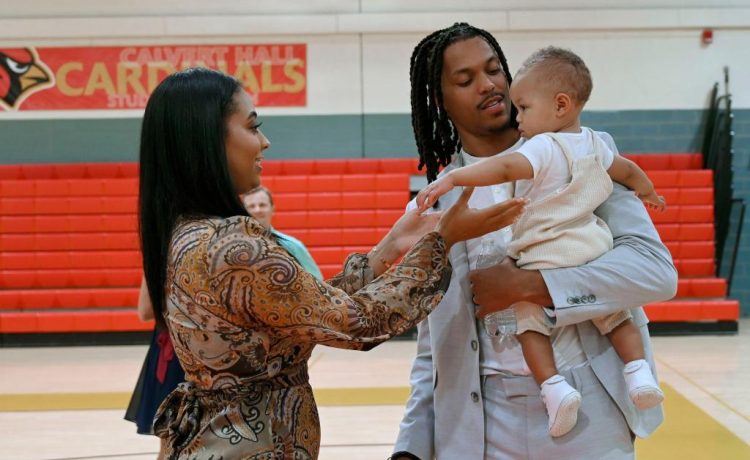 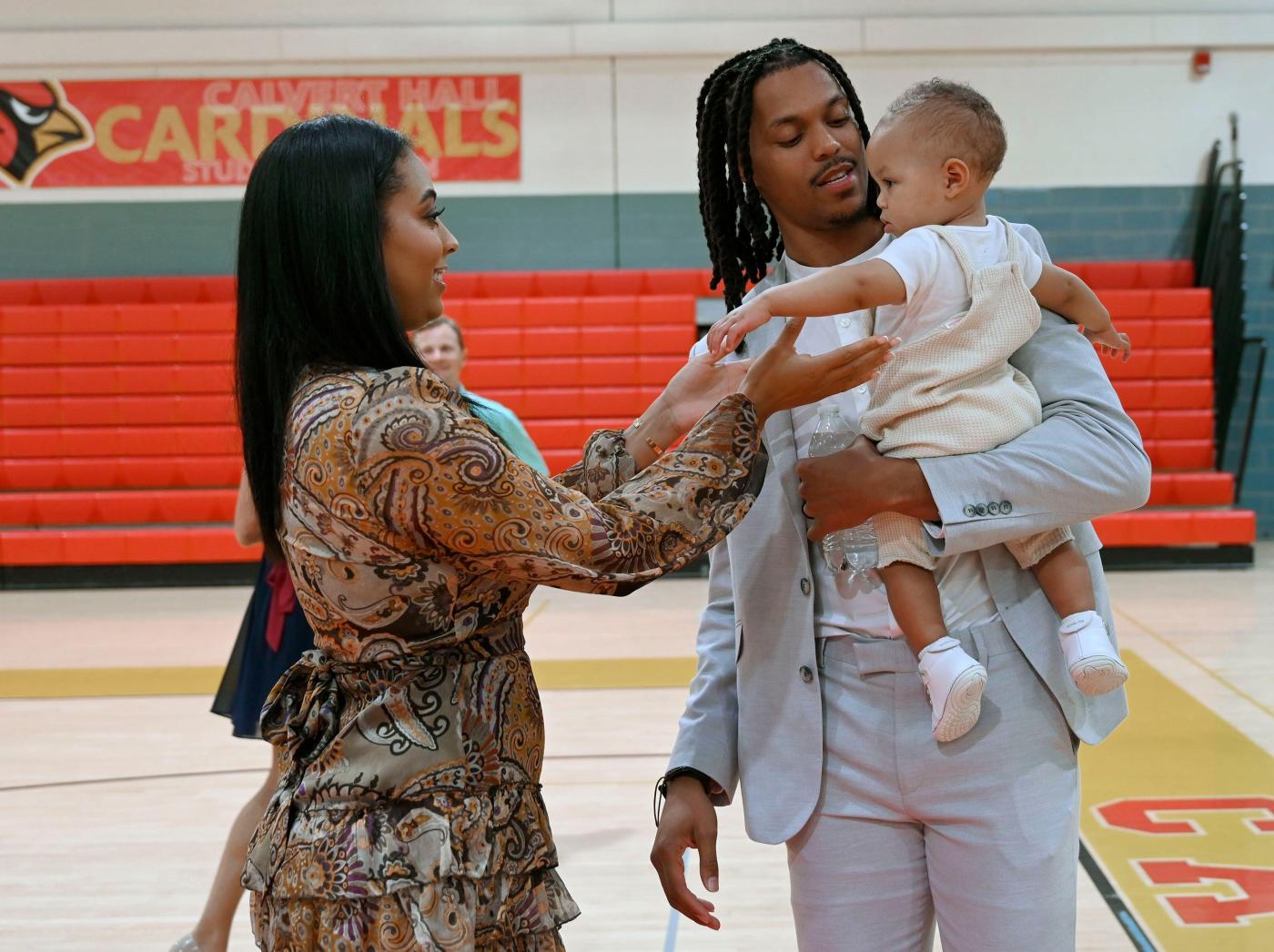 The resilient path taken by 2010 Calvert Hall graduate and NBA champion Damion Lee includes a Connecticut prep school, two colleges and time in the G League before breaking into the league with the Atlanta Hawks in 2018.

In June, the 29-year-old guard reached the pinnacle of his profession when he helped the Golden State Warriors capture the NBA title with a 4-2 series win over the Boston Celtics.

On Tuesday, he was back at Calvert Hall, savoring another special night with family, friends, former teammates and coaches as they celebrated a high school career that included a Baltimore Catholic league championship in Lee’s senior season.

When Lee made it to the microphone, moments after becoming the fourth Cardinals player to have his NBA jersey emblazoned on the Alumni Memorial Gym wall, he gushed: “That’s crazy! That up there is real crazy!”

Lee, who in July signed a one-year contract to play for the Phoenix Suns after averaging 7.4 points, 3.2 rebounds and 1.0 assists for Golden State last season, found his way back to his high school gym with a smashing success story based on hard work and belief.

“It’s dope — I love it,” Lee said. “It’s a matter of just working hard. I think that’s the main thing in life — whatever your dreams, you chase them, you double down on them and you don’t let anybody deter you from them. Having support I think has always been the biggest thing for me — support from my family, friends, coaches, everyone that has always pushed me and made sure to keep me on the right track.”

Lee transferred to Calvert Hall from Mount Saint Joseph in his junior year and proved a valuable final piece in helping the Cardinals claim the BCL championship as a senior in 2010.

“I think what he brought to us when he came to Calvert Hall was incredible energy. He’s a great personality to be around — a very positive, glass half-full guy and his outlook on things is just so positive,” Bauersfeld said. “He brought us a little more belief in ourselves that we can beat the teams we had been struggling against, like St. Joe and St. Frances and even Towson Catholic back in the day.”

Lee soaked in his special night, gathering with some of his former Calvert Hall teammates for a group photo and enjoying the company of his loved ones, including his wife, Sydel Curry-Lee, and 9-month-old son, Daxon. Sydel is the younger sister of Steph and Seth Curry and daughter of Dell Curry, making Lee part of one of the most famous families in basketball history.

“It’s amazing to see how it all happened — that was 12 years ago,” said Lee, who played at Drexel and Louisville before turning pro. “I always tell people when I was graduating high school, if you would have told me I’d be in the NBA and even something like this [jersey ceremony] would happen, there’s no true belief in it, because for me, it was just about getting to college. How can I get to college … it wasn’t to become an NBA player. That was just something that happened along the way.

“I’m thankful, I’m blessed and I’m here and I don’t plan to stop anytime soon. I got to keep on working , keep on working to make sure I can get better and be there for the long haul.”

On the wall, Lee joined Duane Ferrell (Class of 1984), Juan Dixon (1994) and Cardinals second-year coach Gary Neal (2002) as four Calvert Hall graduates who reached their ultimate goal of playing in the NBA.

“To have the type of career Damion has had just shows a lot about his character, his dedication, his discipline, his work ethic and that’s important,” Neal said. “When [current high school players] come in here and they see those jerseys on the wall, that means a lot. It means you’ve accomplished something at the highest level in what you set out to do. Damion has had a great, great career.”