Todays Though > News > Nets not overreacting to losing streak, but winning cures all – Boston Herald
News

Nets not overreacting to losing streak, but winning cures all – Boston Herald 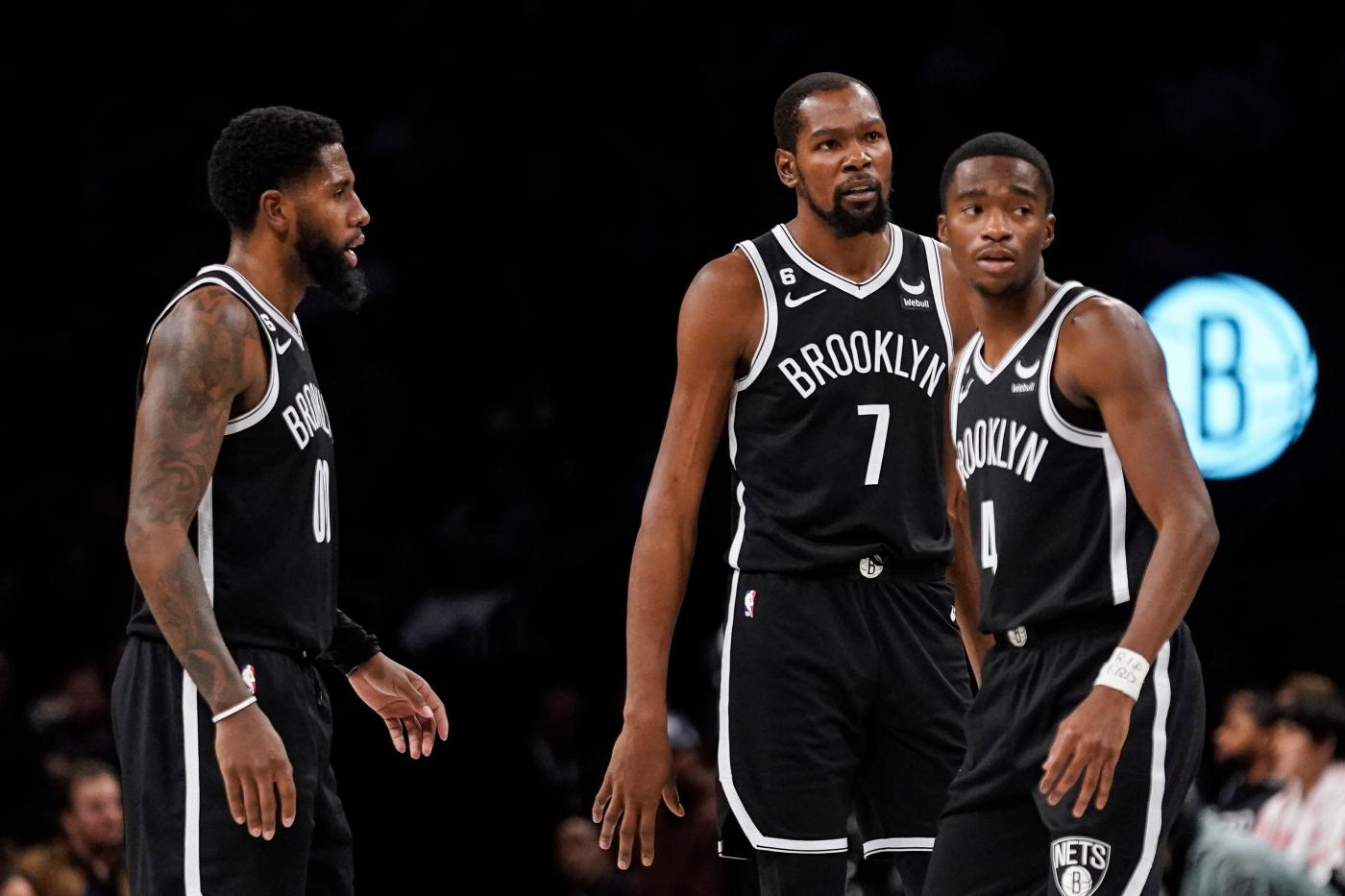 It’s the easiest thing to do — or to suggest one should do — when the going gets tough early into an NBA season with championship aspirations: Blow it up and start from scratch. And for the Nets, Kyrie Irving essentially poured lighter fluid on an already flammable situation following Kevin Durant’s offseason trade request and ultimatum.

Ten days from the season opener feels more like 10 years for a Nets team whose on-court struggles are only overshadowed by its off-court drama.

They are a championship contender for the third season in a row, but only have one win in their first six games to show — and their latest loss came against an Indiana Pacers team they were 11-point favorites against.

“They’ve [the Pacers] got three guys hitting five-plus threes and they were hot: Buddy Hield, Tyrese [Haliburton], and Benedict [Mathurin],” Kevin Durant said after the loss. “They’re good players though. All of them will get $100 million dollars so regardless of the expectation or what they look like on paper, they’re individually good players, then they got some more that were hurt tonight. There’s talent in this league. We can’t overlook everybody.”

That’s been the name of the game through the first six games — the first five of which were against legitimate NBA playoff competition before Nets fans all-but booed the team off the court following a particularly embarrassing effort — or lack thereof — against an Indiana team Las Vegas has winning fewer than 24 games this season; and funny enough, it’s why the Nets aren’t overreacting to their early season woes.

It’s one thing for the team to maintain things will be ugly before they get pretty, and it’s a completely different story to live that truth during a particularly poor start to the season.

The Nets only view themselves as truly having blown one real game. The other four losses came against the New Orleans Pelicans, Memphis Grizzlies, Milwaukee Bucks and Dallas Mavericks, all teams positioned to make deep playoff runs this season, all of whom have rosters that have largely been constructed similarly for years against a fresh Nets team still searching for its identity.

“Things aren’t bad. We lost a basketball game,” veteran big man Markieff Morris said after shootaround Monday morning. “I think that we have to realize that, six games into the season with a brand new team, Indiana was a bad loss because they really outplayed us, but the games before that, we played against a good team that had some good players and they’ve been playing together for awhile, so they had some camaraderie that we’re trying to get.

“And six games into the season, like, I don’t — our best basketball is ahead of us for sure.”

Yet on the other side of the same coin is genuine concern, concern the cross-country Los Angeles Lakers have also shown for a championship team built around LeBron James that, like the Nets, is also off to a 1-5 start.

What if things don’t get better? What if the issues begin to compound? What if the locker room fractures? Is this team strong enough to sustain another losing streak?

The Nets have been preaching patience but now, as a fanbase supporting a team with the NBA’s third-highest payroll begins yearning for results in the win-loss column, that patience will truly be put to the test.

“I think our approach as coaches has been to be honest and fair at the same time — to point out when it’s not up to our standards, to point out where we need to improve and be fair at the same time,” Steve Nash said ahead of a second-straight tipoff against the Pacers on Monday. “I think deep down, that’s the only way we can really respect the process, if we are honest that there are certain things that need to get better and be firm with those things. We’ve got to keep fighting. That’s the biggest thing. We can’t take our foot off the gas. I think we did last time out and we’ve got to resist the urge to not have that winning mentality, to be willing to go that extra step for each other.”

That being said, the Nets still feel strongly about their chances of turning the season around. Ben Simmons said the team had a players-only meeting where he characterized the mood as “honest.”

“Obviously I’m not gonna talk about [what was said during the meeting], but it was honest,” said Simmons. “That’s what winning teams do: Hold each other accountable, be open and talk to your teammates and respect that.”

Simmons also glared a look of disgust when asked if the Nets can turn their season around.

A Pacers source also relayed confidence to the Daily News that the Nets — given their championship and veteran pedigree — would eventually hit their stride and figure out how to win games.

Provided, of course, that they give it time and don’t fracture from within before playing their best basketball, the source offered as a caveat.

The key to keeping steady, according to veteran guard Patty Mills, is to “keep things light,” not riding the highs too high or the lows too low.

“Just being able to stay level headed throughout this whole thing,” Mills said at Monday’s shootaround. “Understand that this is a new group that we’re trying to find the dynamics to be able to make this thing work, and then, that takes time. So I think for us to be able to understand and go through it this early in the season, it’s good for us if we’re able to stay together and see the big picture.”

Mills doesn’t believe anything is broken, and the team appears fully under the assumption that all will work once they get the time to mesh, when Simmons fully recovers from his offseason back surgery, and when Joe Harris and Seth Curry make full returns from their recent ankle surgeries.

“I don’t think anything needs fixing just yet. I think we need to play a lot harder, we need to execute, that’s what’s being said, but between the group: The group gets along really well,” Mills said. “We’re all in the trenches here together. So to flip it to a positive, it’s good that we’re going through this early so we can figure it out. Just just making sure that we do stay together in the trenches to be able to work it all out.”