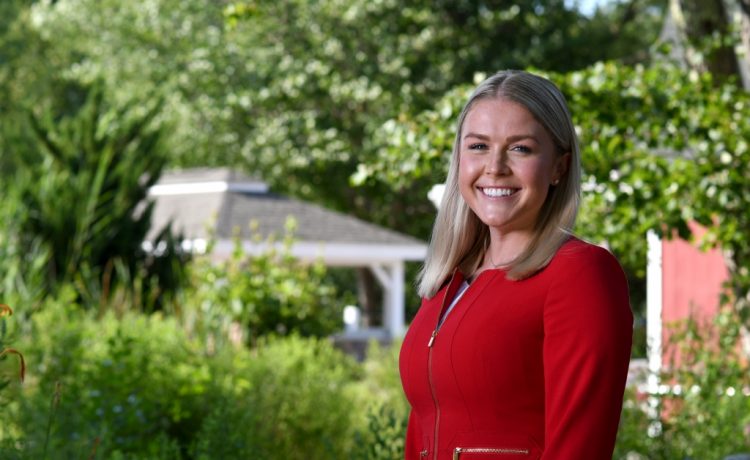 Karoline Leavitt would be AOC’s worst nightmare in Congress.

The Republicans have been looking for someone like U.S. Rep. Alexandria Ocasio-Cortez, D-N.Y. — not in the sense of being a ditzy diva, obviously, but for somebody who can deliver the message and not look like another boring politician, if you get my drift.

A number of House Republicans, male as well as female, would love to be anointed as the anti-AOC. Even U.S. Rep. Matt Gaetz, R-Fla., has mused publicly about the prospect, as ridiculous as it is.

Now comes Karoline Leavitt, the Republican nominee in the First Congressional District of New Hampshire, and what did the national GOP try to do to her in the primary?

They spent $5 million to slime her — $5 million! On behalf of Matt Mowers, a career swamp creature from New Jersey who worked for, among others, former  White House Coronavirus Response Coordinator Dr. Deborah Birx and former New Jersey Gov. Chris Christie, and is married to a CNN producer. Can you feel the Make America Great Again excitement?

How would a Congresswoman Karoline drive AOC crazy? Well, for starters, Leavitt is 25 years old and AOC is 32. Karoline would be the youngest woman ever elected to Congress.

Karoline comes from a more authentic working-class background than “Sandy from Westchester.” Neither of her parents went to college, which is something AOC can’t say, much as she’d like to.

On Friday afternoon, Karoline Leavitt was campaigning in Portsmouth, N.H., where I was doing my radio show from Toyota of Portsmouth. She stopped by and suddenly everyone was crowding around her, wanting to shake her hand or take a selfie with her.

Suddenly it wasn’t my remote anymore, it was Karoline’s.

I’ve witnessed this phenomenon before in New Hampshire. The guy’s name was Donald Trump.

Obviously Karoline is not Trump, but she did work for the president in the White House press office. Earlier, she’d been an intern for Fox News when she was at St. Anselm College. (A little more middle-class than AOC’s alma mater, Boston University — another brag edge to Karoline.)

Post Trump, she went to work for U.S. Rep. Elise Stefanik, R-N.Y. I’ve never asked Karoline, but my guess is that once she began seeing daily all of the statesmen and women on Capitol Hill, she quickly figured out that she was at least as smart, not to mention a lot cuter, than almost everyone else.

And she works super hard. Her campaign knocked on 70,000 doors in the Seacoast district. She works a room like an old pro.

Now she goes up against a lackluster Nancy Pelosi puppet named Chris Pappas. He’s the incumbent, a political chameleon who until Nov. 8 will be trying to disguise himself as a working-class hero instead of the woke social justice warrior that he really is.

It’s a very competitive district — Pappas didn’t beat the Jersey boy by all that much in 2020, a presidential election year.

You can bet that Pelosi puppet Pappas will use the same anti-Karoline everything-but-the-kitchen-sink playbook that the swamp RINO’s employed in the primary — Leavitt may be the best thing that’s happened to WMUR’s bottom line this year.

Ten days ago, five days before the primary, the RINOs dumped another million bucks into Jersey Boy’s account to buy more attack ads on Channel 9.

I asked Karoline how it felt to watch herself being slimed on all those TV spots.

“One night, though, I went over to my parents’ house, just to have a real dinner, and they turned on the TV to watch the news, and every break, the ads just kept slamming me, and my family, one after another. Finally I just said, why don’t we just turn off the TV?”

Actually, the barrage probably helped her. Every knock a boost, as James Michael Curley used to say. And a lot of the people who still watch local TV news are older, and if they’re men, well … all the preprimary polls showed that she was winning the male vote big-time.

The younger demographic groups get all their news from social media. And even though she raised and spent $2 million on her own primary campaign, Karoline personally handles all her campaign’s social media.

Which explains what she did to Mowers in the final days. She can take a punch, and she can throw one as well. Check out her attack website, backdoormatt.com.

In 2020, her old boss Trump endorsed Mowers in the general election. This year, he stayed neutral. Fox News host Tucker Carlson had her on for a segment the night the Swamp dumped its final million into Mowers’ anti-Karoline slime account. She banked $200,000 off that appearance on Fox.

Karoline didn’t have the RINO moneybags behind her, but she did have, among others, her old boss Stefanik, as well as Reps. Lauren Boebert, R-Colo., and Byron Donalds, R-Fla., who were with her at her election-eve rally at — where else? — a gun range.

Can she win? She came out of nowhere once, maybe she can do it again on Nov. 8. But she’s got a great story, and she can talk a dog off a meat wagon. Karoline talks about all the top issues, like the big celebration at the White House last week on the day the bad inflation report came out and tanked the stock market.

“While the market’s crashing, they’re out there having a party,” Karoline was saying, in disbelief, “and then they had some guy out there singing a song.”

Some guy? That would be James Taylor. When she said that, everyone in the audience in Portsmouth chuckled. How great is that, that a Republican candidate this close to being elected to Congress doesn’t even know — or care — who James Taylor is?

I don’t know about you, but I wish I didn’t know who James Taylor was. He’s from Martha’s Vineyard, you know, and once you know that, how much more do you need to know?

Karoline for Congress. You’ll be hearing more of her, and so will AOC.