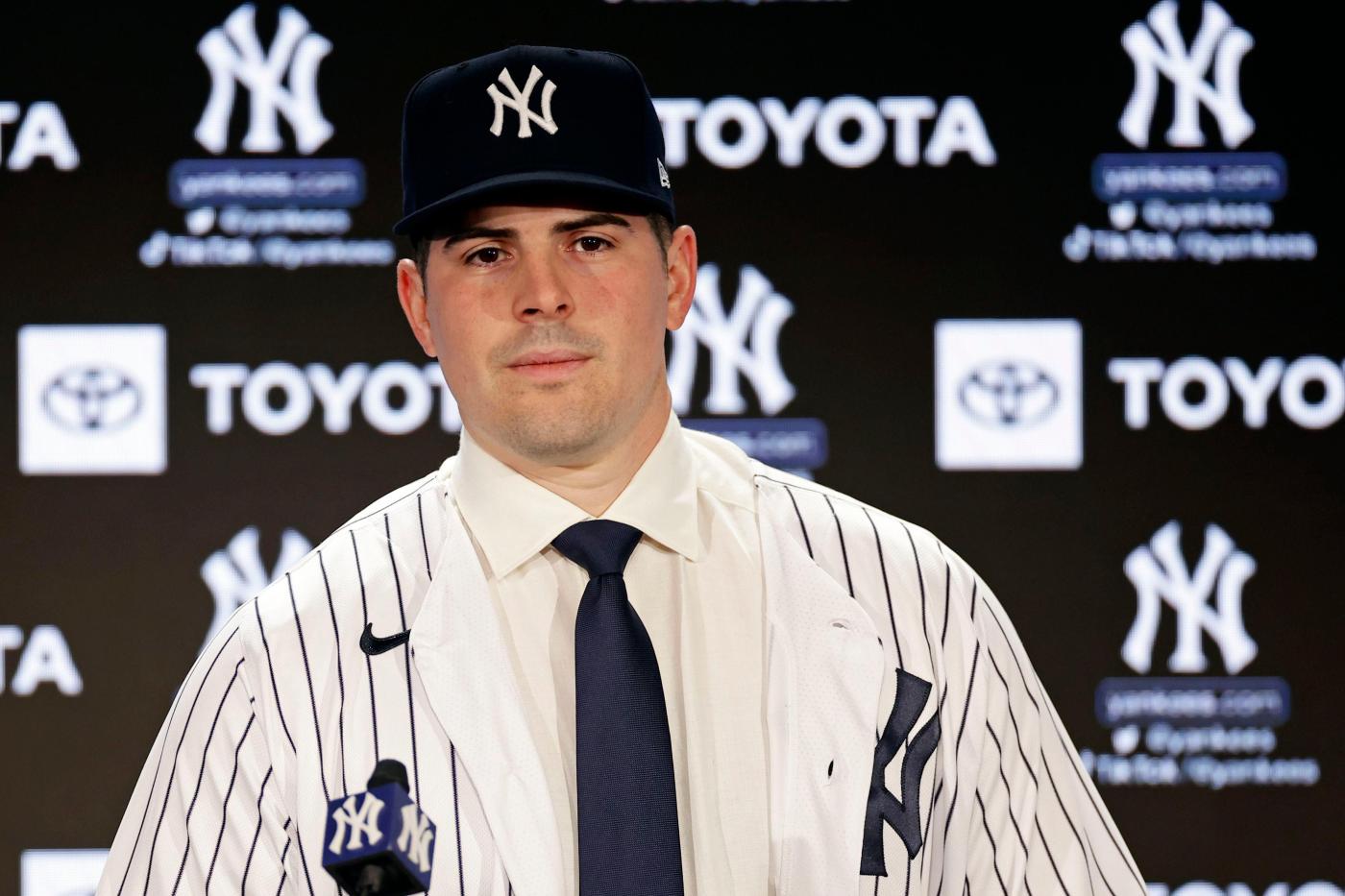 The Bombers got their bulldog as Carlos Rodon was officially introduced as a member of the Yankees on Thursday morning.

The two-time All-Star, who will wear No. 55 on the back of his pinstriped jersey, will slot right behind Gerrit Cole as the Bombers have formed one of the most formidable rotations in baseball.

Rodon — who pitched to a 2.88 ERA in 31 starts for the Giants in 2022 — has the reputation of being a fiery competitor. The southpaw regularly demonstrates his passion by letting out a roar coming off the mound in big moments.

However, for as successful as he has been in his major league career, Rodon, 30, has very little postseason experience. He has appeared in just two career postseason games with one of them being a loss against the Houston Astros in the 2021 ALDS.

The opportunity to get more of that taste of October baseball is one of the big reasons Rodon wanted to join the Yankees.

“Do you want to win?” said Rodon of what he was looking for when seeking a home in free agency. “Which is probably the most important part. As we all know, the New York Yankees definitely want to win. They put the best product on the field that they can so I know they are committed to winning.

“The brief [postseason] experience I had with the Chicago White Sox, that brief taste, I’ve always wanted more. Winning has been at the top of my list as a player, as we know, it’s the Yankee way.”

Perhaps the biggest question facing players when making their way to the Bronx is whether they are equipped to handle the pressure of New York? From everything Brian Cashman and the Yankees have gathered, Rodon will thrive in the highly intense and competitive environment.

“It’s always a tough thing to predict,” Cashman said at Thursday’s press conference at the Stadium. “The one thing I can say is that from all information that we’ve gathered from his teammates in Chicago as well as San Francisco is that he has a competitive side that is probably second to none.

“He really wants to win. He’s going to challenge the opposing lineup and he’s coming at them with an attitude of ‘try hitting this.’ If things aren’t going the way he thinks they should be going for him, he’s going to display it. Because ultimately he cares that much. Those are passion traits that are obviously attractive.

“I respect the fire that he possesses.”

Rodon over the past two seasons has developed a pitching arsenal that has taken his game to new heights and led to back-to-back All-Star nods and now a six-year, $162 million contract with the Yankees. He features a fastball that tops out in the upper 90′s followed by a wipeout slider.

The two pitches accounted for 92.3% of his arsenal in 2022 with the Giants, mixed in with a curveball and changeup. Rodon figured to just go with what works — he led all starters with a 12 K/9 ratio — as his combination was what got him outs and in his words to “keep it simple, stupid.”

Newly re-signed Yankees pitching coach Matt Blake — who inked another three-year deal a few weeks back — has done his research on his new starter. Blake has a knack for unlocking certain pitches or mixes that elevate pitchers to a new level. Rodon is someone who Blake believes he can tap into to ensure he is effective for the entirety of his contract.

“I would say as he stands now, he’s pretty optimized from the fastball-slider combo,” Blake said. “And then it will be kind of like, as we get to know each other and get feedback from the league, where does the changeup fit in, where does the curveball fit in?

Speaking of important things, Rodon has an undeniable history of injuries. He didn’t throw more than 120 innings from 2017-20 and experienced shoulder injuries as well as undergoing Tommy John surgery in 2019.

However, the southpaw has been successful in remaining healthy over the past two seasons. He made 24 starts with the White Sox in 2021 and 31 with the Giants last season. Cashman understands the risk, however, and is hopeful that the injury history is exactly that — history.

“It’s got risk, but I think it’s factored into the contract,” Cashman said. “Typically, pitchers that perform the way he has the last two years, you’re looking at probably even more [money]. I can’t deny that he has a history of injuries prior to the last two seasons.

“Certainly the hope is that he’s found his area of comfort in his professional career. I think Aaron [Boone] spoke to the journey you’re on where you try to navigate a 162-game season. There’s a lot of different areas from mechanics to in-between start routine as well as treatment levels.

“So, certainly the hope and belief is that he’s found his sweet spot here in the last two years.”