New Year’s resolutions and predictions for the Patriots in 2023 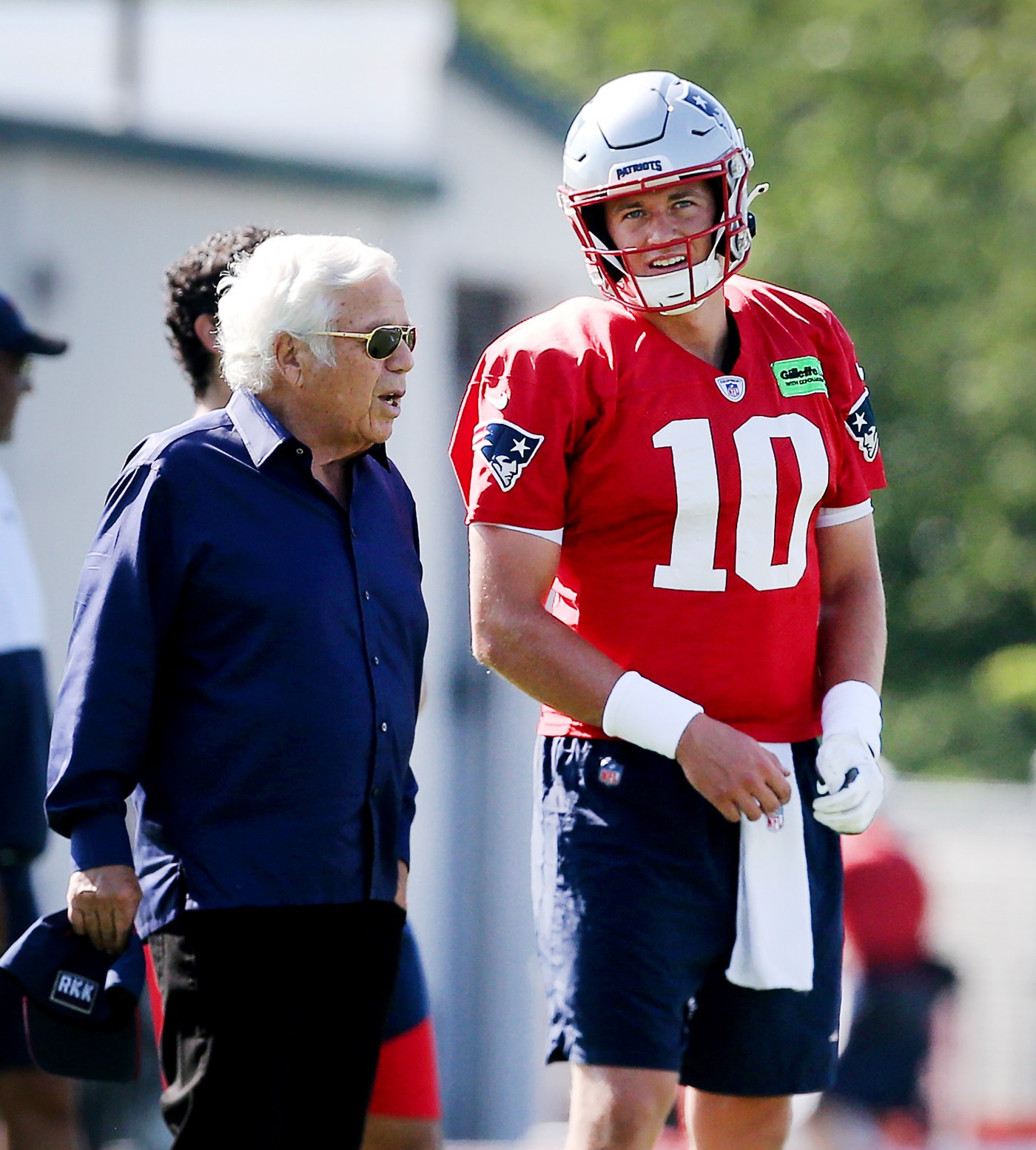 Moving on from 2022 won’t be the worst thing for the Patriots.

The year started with them getting back to the postseason for the first time post-Tom Brady.

Rookie quarterback Mac Jones, taken 15th overall in the 2021 draft, won the starter’s job from Cam Newton and led the team to a 10-7 record, and AFC Wild Card berth by season’s end.

It’s gone downhill from there.

Then, before the end of the month, the Las Vegas Raiders scooped up Patriots offensive coordinator Josh McDaniels to be their head coach, and also hired former Patriots personnel head Dave Ziegler to be their GM.

Along with the group heading to Vegas, the Patriots also lost running backs coach Ivan Fears, as the longtime assistant retired, further gashing the staff on the offensive side of the ball.

That left Bill Belichick to replace McDaniels, the coach who mentored Jones to an unprecedented rookie season. It was, or seemed to be, the top offseason priority for the Patriots.

While there were suspicions as far back as March, it really wasn’t until the end of July, and the start of training camp, that Belichick’s plan truly materialized. That’s when it became clear Matt Patricia, who made his name on the defensive side of the ball, and returned to the team as a senior advisor after being fired by the Detroit Lions as their head coach, was going to be the new play-caller and offensive line coach.

Joe Judge, meanwhile, a former special teams coach with the Patriots who got canned not long into his head-coaching stint with the New York Giants, was tabbed to be the new quarterbacks coach.

There was plenty of eye-rolling and skepticism over those moves, along with the decision to move away from the offensive scheme and system that had been in existence in Foxboro for more than two decades.

Even so, Belichick, a six-time Super Bowl-winning head coach, was given the benefit of the doubt at the start. That view has changed because the results have been nothing short of disastrous.

In March, Patriots owner Robert Kraft said he expected the team to re-emerge as Super Bowl contenders “as soon as this year.”

“It bothers me that we haven’t been able to win a playoff game the last three years,” Kraft told reporters at the league meetings.

Well, the Patriots are not considered contenders, and if they don’t beat the Dolphins Sunday during their Week 17 showdown in Foxboro, they won’t even be a playoff team.

So with that as a backdrop, it’s time to ring in the new year.

What should Belichick & Co. be promising to do differently in the new year, especially if they want to change the narrative from 2022? Let’s just say it wasn’t hard to come up with a few ideas. So without further ado:

Bill Belichick: He promises to recognize and fix the colossal mistake he made with his offensive coaches. That means extracting Patricia from his play-caller duties, Judge as quarterbacks coach, and hiring someone with a clue about quarterbacks and offense. Preferably that person is Bill O’Brien. And if not, someone who is qualified to get the unit back on track.

Bill O’Brien: Should he get the job as offensive coordinator, he vows to fix Mac Jones, make the unit better on third down and in red zone offense, and guarantees to not bury Kendrick Bourne.

Matt Patricia: If he has to coach, promises to move back to defense.

Joe Judge: If he has to coach, promises to return to special teams.

Jerod Mayo: He promises to land a head coaching job, and barring that, to pull out all the stops to get the defensive coordinator title in Foxboro he deserves.

Dante Scarnecchia: He promises to unretire for a third time (we can only hope!).

Mac Jones: For starters, he vows to stop whining and dump the pouty face. After that, he vows to get back to being the same promising player he was during his rookie season. Or else, will have to endure Zappe Fever once again.

Rhamondre Stevenson: He vows to continue to ascend as a three-down running back, minus the crazy laterals and fumbles, of course.

Marcus Jones: He vows to develop an iron lung so he can play offense, defense and special teams full-time.

Matthew Judon: He promises to keep increasing his sack totals and never change. Because on and off the field, he’s a one-of-a-kind gem.

Josh Uche: He pledges to continue to evolve into one of the game’s great pass-rushers. Judon seems to think he will.

Jakobi Meyers: He vows to stay in New England because the Patriots offer him a reasonable deal.

Trent Brown: He vows to make good on last year’s promise to be the best offensive tackle in the league.

Nick Folk: He promises to find 5-to-10 more yards of consistent range for his field goals.

Time to roll out the crystal ball and forecast a few events for the Pats in the new year.

1. Belichick re-assigns Patricia and Judge and hires a legitimate offensive coordinator and quarterback whisperer with a nudge from owner Robert Kraft: While it’s a prediction, it’s also a non-negotiable request. It has to happen. And should happen. Mac Jones lost an entire year, regressing from his promising rookie campaign. How do the Patriots really know what they have in the second-year quarterback at this point given what went down in 2022?

Once again, the mission is to find the answer, only this time, do it the right way with Jones being led by a coach who has actual experience mentoring a quarterback and calling an offense. While it’s possible the staff already has a beat on Jones, and his capabilities, they still need to provide him top-notch coaching, not to mention better weapons, to better understand his ceiling. See what Miami did for Tua Tagovailoa, Cincinnati did for Joe Burrow, or Jacksonville did for Trevor Lawrence for details.

2. Both Devin McCourty and Matthew Slater retire: This prediction is not based on inside knowledge, it’s based on a feel for the situation. McCourty’s twin brother Jason stepped away this year, and landed at NFL Network’s “Good Morning, Football.” During the bye week, Devin did a stint on CBS Sports as a guest analyst, so you have to think the wheels are spinning in that direction for the 35-year-old, who has 13 seasons under his belt, along with three championship rings.

Basically, McCourty’s getting all his ducks in a row for whenever he decides to move on, and the timing just seems right for that to happen.

As for Slater, he’s 37 with 15 seasons on the books. He’s still an effective gunner on the special teams units, but might be ready to pass the baton.

Slater was asked last week about the possibility, but declined to say whether he planned to retire after this season.

“Look, I’m just trying to stay in the moment,” he said in a video conference. “Only the good Lord knows what’s in store for me beyond this very hour, so for me, it’s just to try to stay in the moment, enjoy the opportunity that I have. I know my opportunities are fleeting as an advanced-aged football player, but I’m thankful to be a part of this team.

“I’m thankful for another opportunity to come out and play at Gillette Stadium, and I’m going to try to make the most of it. Whatever happens after that, we’ll see, but I’m excited and thankful for this opportunity.”

Should both opt to retire, that would leave a considerable leadership void in the locker room.

3. Patriots draft a tackle in the first round: Without question, they’re going to have to find one. And the best place to look might be the draft. Flipping Isaiah Wynn and Trent Brown to their opposite sides from a year ago didn’t exactly work for the better at the tackle position. Wynn is set to hit free agency. So he’s not coming back. That’s not a prediction, it’s an assessment based on logic.

Neither Yodny Cajuste nor Conor McDermott, who have been manning right tackle with Wynn done for the season, are the answers for next year. So just as they took Cole Strange, a guard, in the first round last year, they are bound to go with another offensive lineman in 2023.

The offensive line can’t be a major issue once again if the offense is going to get right. The Pats will have a lot of money to spend against the cap, so they might draft and also sign free agent help for the unit.

4. Patriots find a new No. 1 corner: While the Patriots drafted two promising young corners in Jack Jones and Marcus Jones, they stand to lose Jonathan Jones, who is a free agent at season’s end. They still have Jalen Mills, who’s currently injured, but they still lack a true top shutdown corner.

Without one, as the Patriots have already seen, it’s tough to keep up with the teams with a ton of firepower at receiver, such as the Vikings, Bengals, Bills and Dolphins. And many of those teams are either in their division or in the conference.

So it behooves the Patriots to get that top gun whether it’s via trade, the draft, or free agency.

With respect to the latter, there aren’t many notables on the list, with James Bradberry (Eagles) and Marcus Peters (Ravens) among the bigger names.

Bottom line, the Patriots have to find another Stephon Gilmore, Darrelle Revis or Ty Law to make the secondary whole.

5. Matthew Judon gets the team’s sack record: That might come as soon as Sunday against the Dolphins, and if not, in the regular season finale against the Bills.

Currently, the outside linebacker is three sacks from clinching the franchise’s single-season sack record which was set by Andrew Tippett (18.5) in 1984.

Judon has improved his totals each year he’s been a Patriot, even though he faded down the stretch last year.

He’s worked hard not to have that happen again, and would love to set the new standard.

“Yeah, I’d like to (break it),” Judon said Thursday. “I’m pretty sure (Andre Tippett) is tired of sitting on that throne, so hopefully I can dethrone him.”

6. The Patriots will play better after Thanksgiving next year: Wishful thinking, or a legitimate prediction? Probably a little of both. Belichick always says the season starts after Thanksgiving. Since 2019, which was Tom Brady’s final year, the Pats have been dreadful after the holiday.

This year? Right now they’re 1-4, counting the Thanksgiving loss to the Vikings, with two games still left to play in the regular season.

With improved coaching, better quarterback play, and a better handle on situational football, etc., the Patriots should be able to top those marks.

Hard to believe that Kraft, or even Belichick, who is 20 wins shy of tying Don Shula as the winningest coach of all time, will stand for more of the same in 2023.