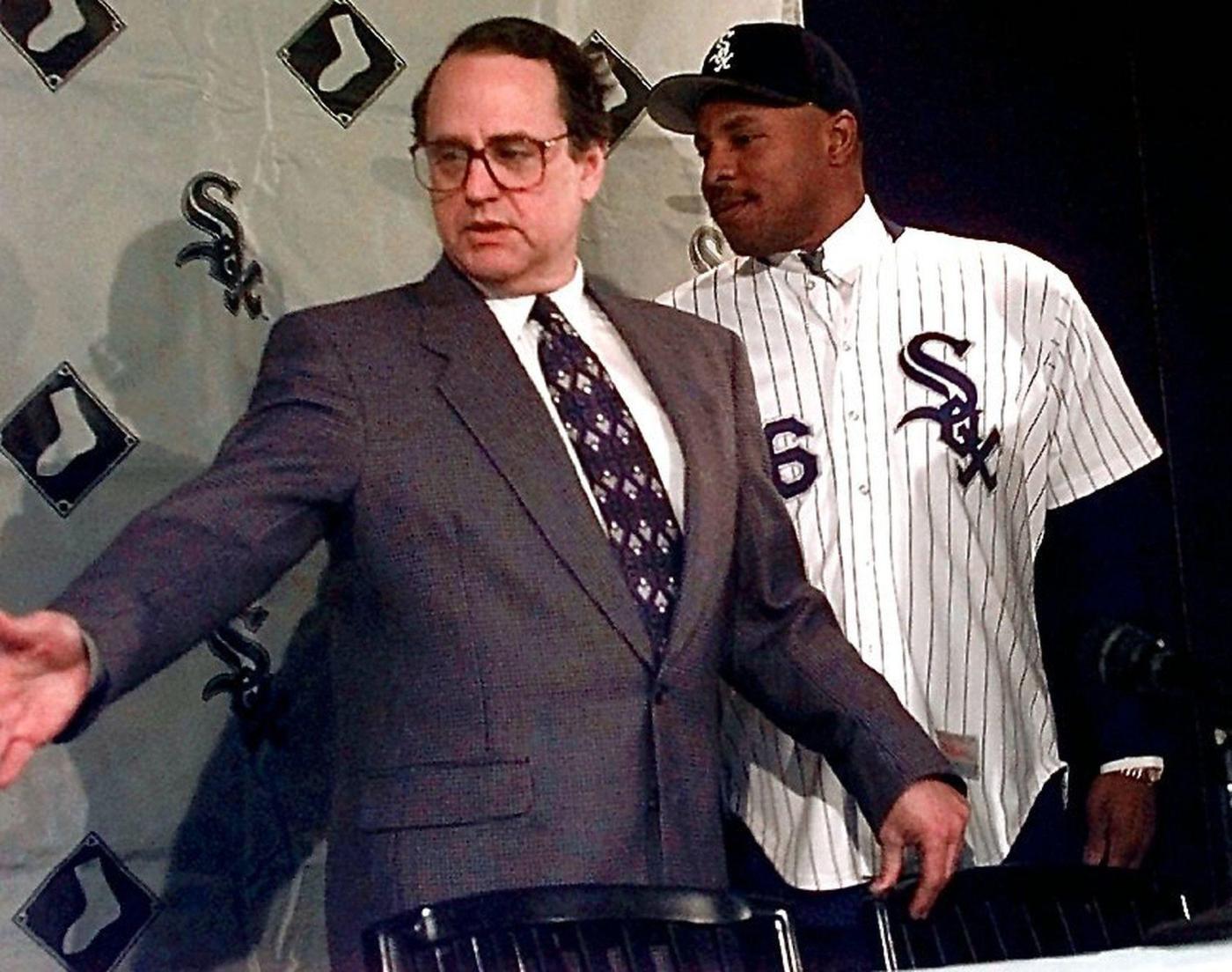 White Sox fans were ecstatic. The Sox players loved it. Belle would team with Frank Thomas and Robin Ventura to make for a potentially lethal lineup.

But other owners were apoplectic. The combined salaries of Belle and Thomas, in excess of $17 million, would be more than the entire payrolls of the Milwaukee Brewers, Pittsburgh Pirates and Montreal Expos. And Reinsdorf had been a leader of the owners in a battle with the players union that led to the strike that canceled the end of the 1994 season.

“Reinsdorf sneered in the faces of fellow owners as he rubbed their faces in his wealth,” New York Times columnist George Vecsey wrote of the reaction to the signing. “And Tuesday, after fellow owners broke free of his spell, Reinsdorf again sneered at them (with words). That attitude has been the cold, cruel heart of the owners’ behavior all along.”

This brief history lesson is good to know when pondering the latest shocking moves by a baseball owner, namely New York Mets owner Steve Cohen, whose record-busting $384 million payroll will lead to $111 million in luxury-tax fees that are more than the payrolls of 10 teams.

The price of winning keeps going higher, and all it takes is one owner to upend the salary structure.

Reinsdorf reportedly was one of the owners against the sale of the Mets to Cohen, and Cohen’s limitless wallet was seen as the main reason for Reinsdorf’s objections. He has not spoken publicly about it, so it’s just speculation. But if that was the case, Reinsdorf’s concerns were prescient.

Cohen’s spending habits — more than $800 million this offseason — will force the rest of the owners to get on board and shell out more money for star players or try to compete against teams such as the Mets that have no qualms about going over the luxury tax to field a virtual All-Star team. According to yahoo.com, the $315 million spent on Carlos Correa was more than the Pittsburgh Pirates have spent on all their free agents in more than a decade.

It feels eerily similar to that fateful offseason of 1996, when the Belle signing caused such a ruckus.

“Tell me,” Reinsdorf asked Tribune baseball writer Jerome Holtzman after the Belle deal was announced, “is there a rule against the White Sox winning the pennant?”

There was, of course, no such rule.

“Then why are so many baseball people upset that we signed Albert Belle?” Reinsdorf asked.

“You have made him baseball’s first $10 million player and have raised the price of poker,” Holtzman wrote of the conversation. “Every free agent and the hundreds eligible for salary arbitration will key off Belle’s salary. It could cost each club as much as $2 million to $3 million annually. You often said you didn’t like the idea of paying for the mistakes of other owners. Every time a new salary plateau is reached, there is a ripple effect.”

Replied Reinsdorf: “I can’t argue that. But I didn’t want to risk the possibility of losing him. Also, other owners have done exactly the same thing.”

Cohen acted quickly when agent Scott Boras told him Correa’s 13-year, $350 million deal with the San Francisco Giants had hit a snag and agreed to pay Correa $315 million over 12 years. Cohen didn’t care how much it would cost him in luxury taxes but did what he felt was necessary to give the Mets a better chance of winning a championship. He might not be done yet — the Mets are rumored to be interested in White Sox closer Liam Hendriks, who apparently would share the role with Edwin Díaz.

Is there no end to his how much Cohen will spend? Remember, this is a guy who laughed it off in March when baseball’s highest-luxury tax threshold, $290 million, was unofficially nicknamed “the Cohen tax.”

“It’s better than a bridge being named for you,” he said. “It’s still a lot of money to spend on a payroll.”

So Cohen is a hero to most Mets fans, though one longtime fan wondered aloud if the massive overspending was good for the game.

“As a kid growing up in NYC, I loved the @Mets because they were plucky underdogs,” tweeted political guru David Axelrod. “Now they’re the team anyone who loves baseball should root against, with a disreputable owner who is so blatantly trying to buy a title that you have to hope he fails.”

Cubs President Jed Hoyer was asked Wednesday if Cohen’s massive payroll shows how much money is in the game if owners want to spend.

George Steinbrenner often was accused of going to any length to win in New York and never flinched when going overboard on a free agent he felt could put the Yankees over the top. Other teams have made a splash here or there. Even the traditionally spendthrift Tribune Co. in 1992 made Cubs star Ryne Sandberg the highest paid player in MLB with a four-year, $28.4 million extension. The $7.1 million per year exceeded the next-highest average — Bobby Bonilla’s $5.8 million — by more than 20%, enraging baseball executives.

“To jump from 5.8 to 7.1, that was absolutely stupid a year ahead of (Sandberg’s) free agency,” MacPhail said. “That’s stupidity and timidity. Sandberg sets an artificial deadline and gets away with it! It’s a terrible deal. We’re going to spend ourselves into oblivion. I don’t blame the players. It’s the owners’ fault. We keep giving it to them.”

Armageddon never happened. MacPhail later signed his own lucrative deal to become president of those Cubs. The game survived — albeit after a messy strike.

The guess here is that Cohen’s spending spree won’t be what kills baseball. The proliferation of strikeouts and lack of action probably will do that.

But Cohen’s benevolence will help player salaries escalate and might force some owners to think long and hard about cashing in their chips. Then some new owners will emerge and try to outspend their peers.

It’s the circle of baseball life.