Todays Though > News > No. 3 Spalding football proves itself, routs No. 2 Calvert Hall, 42-7, in Ravens RISE Game of the Week – Boston Herald
News

No. 3 Spalding football proves itself, routs No. 2 Calvert Hall, 42-7, in Ravens RISE Game of the Week – Boston Herald 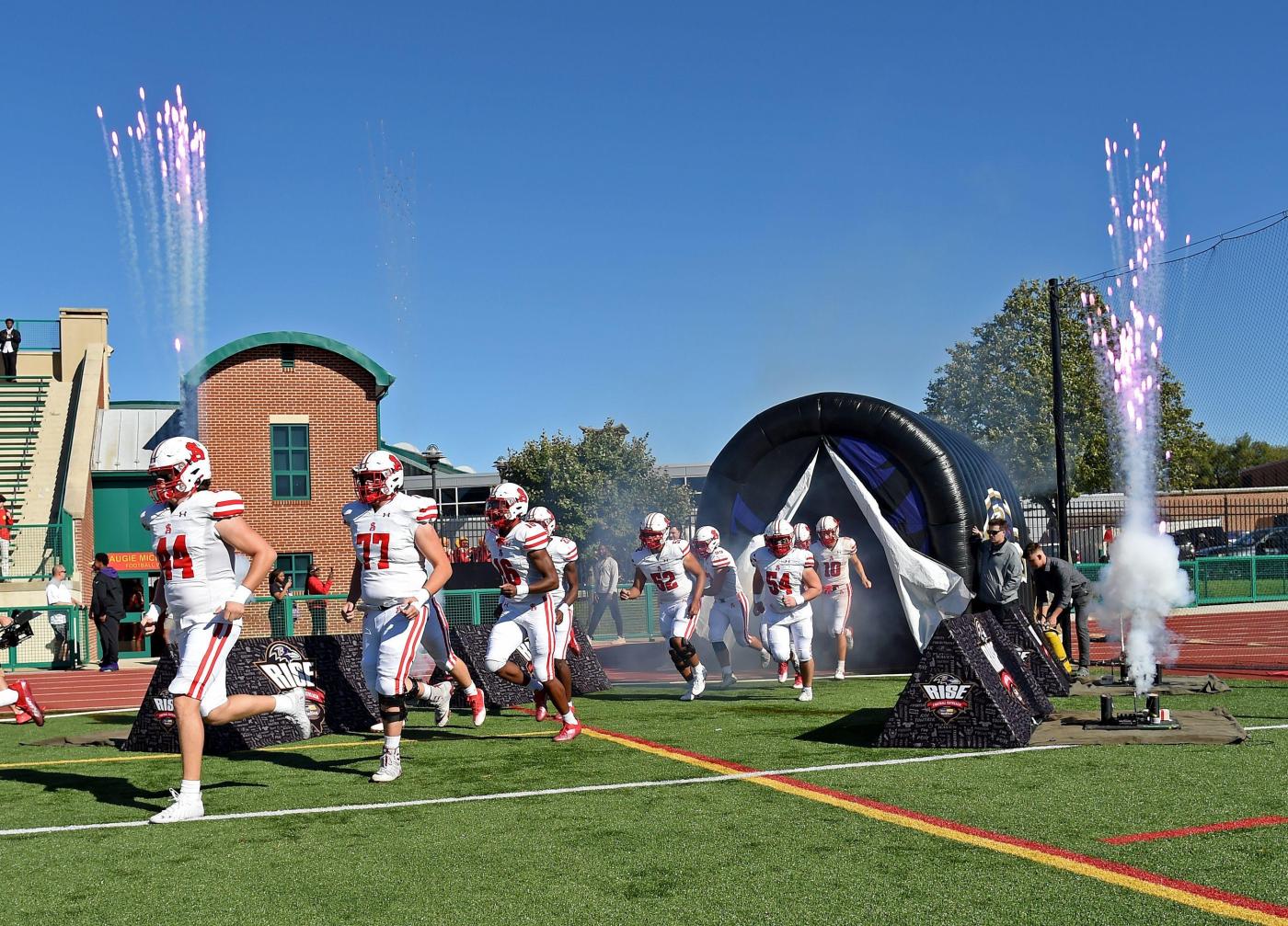 Archbishop Spalding football’s players knew no one expected much of them after the Cavaliers graduated most of their starting roster, let alone that they’d surpass the glory of last year’s team.

But five games and four wins into the season, no one could call what Spalding is doing a fluke. Call it magic.

Even when Calvert Hall had momentum and a chance to take away Spalding’s lead Friday night, the Cavaliers didn’t buckle. Instead, they turned up the effort on both defense and offense and routed the defending Maryland Interscholastic Athletic Association A Conference champions on their own turf, 42-7, in the Ravens RISE High School Football Showdown.

When the Cardinals cut the score to 14-7 in the first half, the Cavaliers (5-1) responded and never gave Calvert Hall (2-3) another chance to get in the game.

Spalding, whose sole defeat is to nationally-ranked Don Bosco Prep out of New Jersey, preaches consistency to its young squad, no matter the situation. On Friday, coach Kyle Schmitt witnessed his defense embody that message.

Two Cavaliers, Paul Poknis and Tyler Brown, intercepted Calvert Hall quarterback Noah Brannock in key moments. Several others yanked the signal-caller down in the backfield. The defense forced Calvert Hall to turn the ball over on downs on their second drive, even as the Cardinals reached the 1-yard line. Early on, Calvert Hall had little trouble beating the Cavaliers’ defensive line, but by the end, could barely get a pass off.

“There’s no panic on our sideline because [defensive coordinator Tyrone Forby] knows what’s happening and he knows how to answer it,” Schmitt said. “And you gotta have a lot of answers when you play us on both sides of the ball.”

Schmitt’s teams have preferred to run the ball over the past decade, but with an arm like Washington’s, the coach finds his staff calling for the pass more often. The sophomore quarterback, already fielding scholarship offers from Maryland and Penn State, among others, entered Friday with 976 passing yards. He easily eclipsed 1,000 by the end of the first quarter.

Calvert Hall chose to double-team Max Moss, Washington’s favorite receiver who entered the week with close to 700 receiving yards in four games. But the Cavaliers have other weapons.

Running back Hakim Simms faced little interference from Calvert Hall in scoring two Spalding touchdowns and putting the hosts on their heels, 14-0, after one quarter.

“You can take something away, but it’s gonna give us something else to do,” Schmitt said. “That’s where you saw the middle field being much more open for other receivers and of course our running game.”

But while Spalding struggled to run its usual pass-friendly offense, Calvert Hall was beginning to feel pretty comfortable with its own.

Brannock repeatedly connected with his receivers, methodically moving his offense down to the Calvert Hall 16-yard line. The Cardinals quarterback quickly slipped from a pile of Cavaliers and flicked a pass to Donovan Lewis in the corner of the end zone for a touchdown.

With its lead cut to 14-7, Spalding needed a spark.

Freshman Aaron Igwebe skated into a slice of open field between two Cardinals, making the catch that would bring Spalding across the midfield — a play both Schmitt and Washington agreed turned the tide for the offense. In the red zone, the Cavaliers ran at the Cardinals’ defensive line before Washington found Moss in the end zone.

“After that, it kind of sparked us,” Washington said. “That flame just started going. And once you get us going, it’s hard to slow us down.”

There was a feverish energy to the way the Cardinals responded as the first-half clock dipped below one minute to go. Perhaps they’d rushed too much. Because when Brannock tried to meet a receiver in the red zone, he instead found Brown, who intercepted the pass and returned the other direction.

But the Cavaliers would not get the cushion they’d hoped for before halftime as one of Washington’s passes met the same fate as Brannock’s, in the opposing team’s hands.

But defensive moments were all the Cardinals had against Spalding’s relentless offensive effort. When Patrick O’Keefe swiped a pick for his Cardinals, Poknis stole it right back for Spalding, just a drive after collecting another touchdown for the Cavaliers.

“Defense got us momentum, which makes it easier on us,” Washington said. “It’s a lot easier to come out on their 30. As an offense, it gives us so much more room to operate.”

Washington willed his offense to another score. Simms compensated for a missed kick earlier, converting two points and handing Spalding a 35-7 lead.

But someone was still waiting for his moment. He’d already scored a touchdown, but Moss is accustomed to more. He thundered down to the furthest pylon and — despite Cardinals senior DJ Ringgold Jr.’s coverage on him — ripped Washington’s pass out of the sky. The senior receiver stomped to his feet and let out a scream of joy, and the lead inflated to 42-7.

“Despite [that coverage], Max still made some great plays,” Schmitt said, “which shows you how special a player he is.”