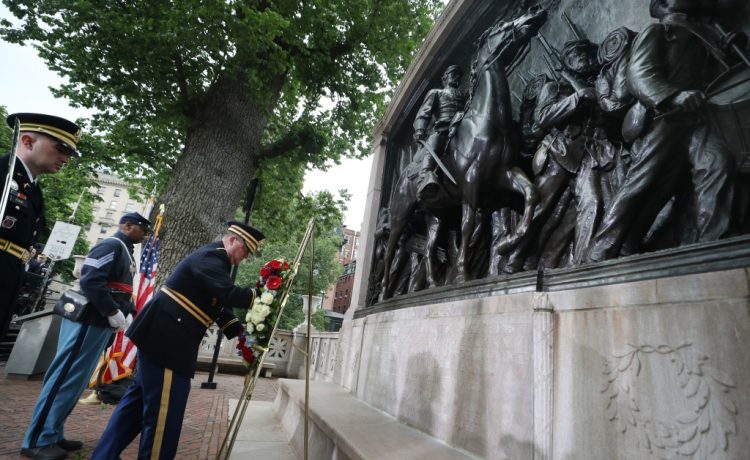 My whole life, like that of many other Bostonians, has been spent at the Common, whether it was being pushed in a stroller, playing in the Frog Pond, briskly walking to a meeting, or simply enjoying the ambiance.

My feet have accumulated a lot of mileage in America’s oldest park. There are several impressive memorials and statues on the Boston Common, but two of them really stand out.

The Equestrian Statue of George Washington, being the first, is thought to be one of the most famous. Mounted on a horse and assuming a dominating stance as he would on the battlefield, Washington is depicted in his element.

The second is the Massachusetts 54th Regiment Monument, which honors one of the most well-known African American Civil War regiments and shows Col. Robert G. Shaw leading his gallant soldiers into combat. Both of these statues have a special place in our history as a nation and a city.

What could be better than two? Three!

To honor two extraordinary people who have made significant contributions not only to Boston and the United States, but also to the entire world. Dr. Martin Luther King Jr. and Mrs. Coretta Scott King are Boston’s adopted son and daughter.

Martin and Coretta’s love story began in Boston in 1952, while Martin was earning his Ph.D. in theology at Boston University. The young couple even went on a date on Boston Common.

There are statues of Dr. King all around the country, but it is incredibly rare to locate one with both Kings together. The only one that exists is in Allentown, Pa., and was revealed in 2011.

The Boston Common’s illustrious history and Boston’s popularity as a tourist destination made this opportunity to honor the Kings that much more fitting. Furthermore, this statue will represent how far Boston has evolved in the last 50 years from a racist city to a world-class city inclusive of all people, reflecting Dr. King’s dream.

Imari K. Paris Jefferies, the executive director of the local non-profit Embrace Boston and Boston’s self-declared Vicar of Dr. King, was given the enormous and prestigious responsibility. Hank Willis Thomas was the statue’s creator and artisan.

The city’s “elite” gathered in a gated event for only invited guests on Friday for the revealing of “The Embrace” statue. The statue that was supposed to symbolize an embrace between Dr. King and Mrs. King was nothing more than two arms detached from a body.

Depending on the angle, the statue appeared to be feces, sexual innuendo, or a “woke penis,” as described by the New York Post. The “Embrace Statue” is an utter insult to the honor and legacy of the Kings, an embarrassment to the city of Boston, and an aesthetically unpleasant addition to the country’s oldest park.

Thomas, to his credit, tried to produce art in honor of the Kings based on his creative perspective, but he would have been better off presenting it to the Institute of Contemporary Art, where it would have been more well-received.

Thomas would have been wise to take a cue from Ann Hirsch’s statue of Bill Russell on display at City Hall Plaza, which does an excellent job of capturing Russell in his basketball element.

This spectacular failure has been the subject of countless jokes around the country. However, Black Bostonians are not laughing; we are outraged, dissatisfied, and upset that this opportunity was squandered.

We don’t see any statues depicting the severed arm of General George Washington brandishing a sword. So, why should we see statues of our African American heroes mutilated?