Todays Though > News > No moral victories despite Dolphins competing with AFC’s best, but Miami must now secure a playoff spot – Boston Herald
News

No moral victories despite Dolphins competing with AFC’s best, but Miami must now secure a playoff spot – Boston Herald 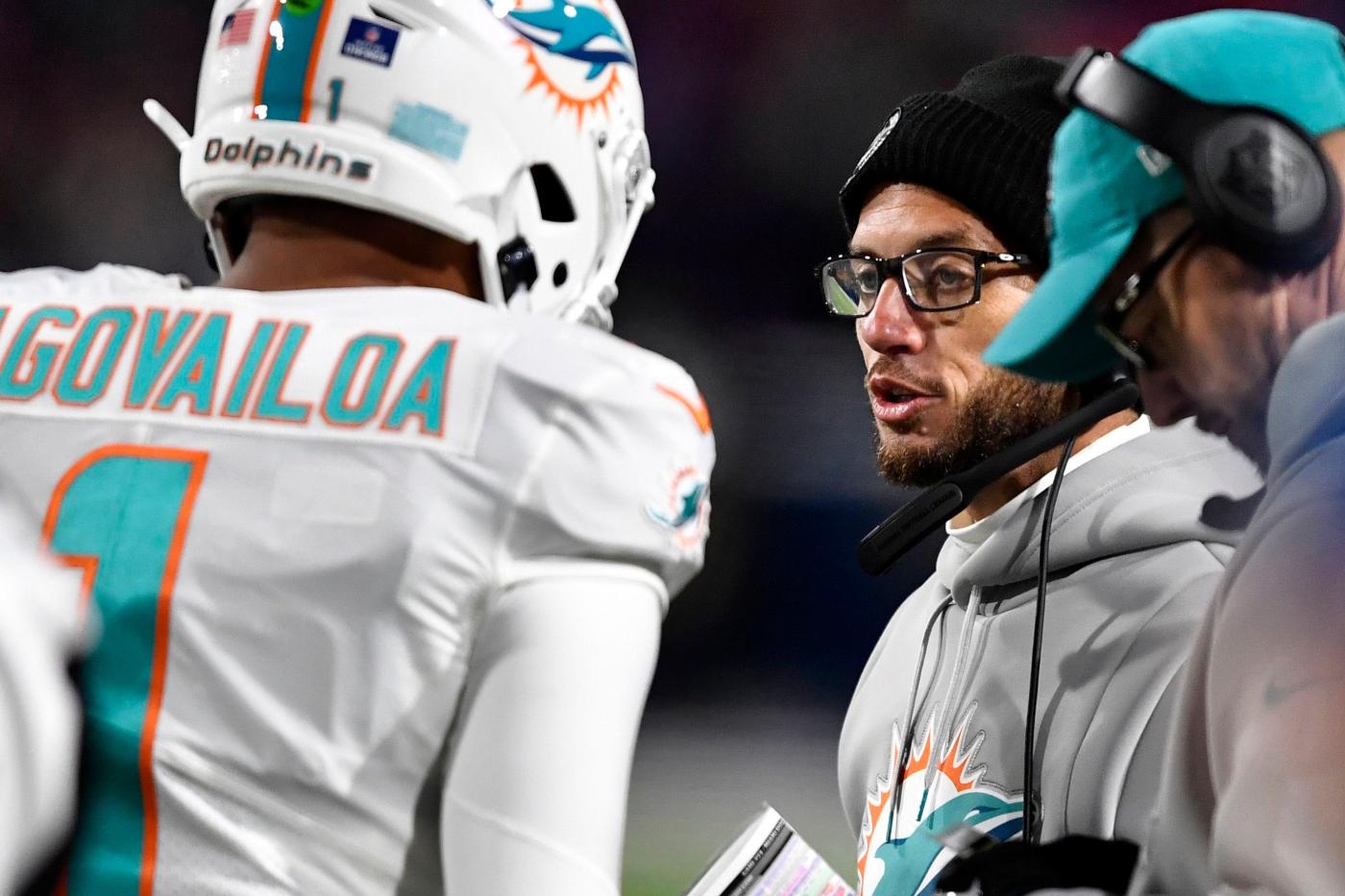 Was there something encouraging to take away from the Miami Dolphins’ 32-29 loss against the Buffalo Bills on Saturday night or was it just another loss in a three-game December losing streak?

“We’re not into moral victories,” wide receiver Jaylen Waddle said after the game at Highmark Stadium.

But outside linebacker Jaelan Phillips countered: “We showed that we can compete with anybody in the league.”

The defeat to the AFC’s current top seed and first team in the conference to clinch a playoff berth is especially heartbreaking for two reasons: The Dolphins, despite everything against them, came so close to pulling off a sweep of the Bills, which is unprecedented since 2016; and it marks a third consecutive loss, sinking Miami to 8-6 after finishing November 8-3 and leading the AFC East.

But this wasn’t 33-17 against the San Francisco 49ers and third-string quarterback Brock Purdy. Nor was it the embarrassment of “Sunday Night Football” last week versus the Los Angeles Chargers. The Dolphins had a short week after a week and a half on the West Coast, went into a frigid, hostile environment and played toe to toe with the Super Bowl favorites until the final second.

“I think that is night and day from the football we’ve played since the bye,” said coach Mike McDaniel late Saturday night in Orchard Park. “So had we played like that for the whole season, we’d be feeling a lot different because it wouldn’t be the third loss in a row.

“I think perspective is important, and I think there’s stuff to learn from it. It’s a gut check, for sure, but I know the guys aspire to be great.”

That aspirational greatness has to come soon and translate to wins with three games remaining in the regular season if the Dolphins plan on making the playoffs, something which seemed like a foregone conclusion three weeks ago.

But despite the three consecutive losses, Miami still — stop me if you’ve heard it before — controls its own fate to qualify for the postseason. In fact, the Dolphins can make it four in a row and still determine their own fate.

The two wins Miami needs are Jan. 1 at the New England Patriots and the regular-season finale against the New York Jets at Hard Rock Stadium. They win those two, they’re guaranteed a playoff berth, even if they lose on Christmas Day to the Green Bay Packers.

But you certainly don’t want to go into a make-or-break final two-game stretch on a four-game losing streak, so next Sunday’s return to Hard Rock Stadium for the first time since Nov. 27 is crucial in that regard.

The Dolphins began Sunday still in sixth place in the AFC and with a 65 percent chance to make the playoffs, according to FiveThirtyEight. That figure went up to 72 percent with the results through the NFL’s Sunday 4 p.m. slate of games, including a stunning Patriots loss to the Las Vegas Raiders, a last-second Chargers win over the Tennessee Titans and earlier Jets loss to the Detroit Lions.

With a win against Green Bay for the Dolphins, their playoff probability would jump up to 81 percent. A loss, and it’ll drop down to 56 percent, but again, still with Miami in control over those final two games.

What if Miami beats the Packers and splits against the divisional foes? If the win comes against the Jets, 95 percent probability of a playoff berth; if against the Patriots, 88 percent.

And scenarios that involve a 1-2 finish? If the win is against the Jets, 69 percent; at the Patriots, 38 percent; against the Packers, 18 percent. The Dolphins would be guaranteed to be on the outside looking in if they lose their three remaining games.

One takeaway from the loss to the Bills is that the Dolphins can handle wintery elements on the road. Temperatures were in the 20s. While snow stayed off the field for much of the night, it began to come down hard late due to western New York’s lake-effect snow warning. It didn’t faze the team accustomed to South Florida’s heat and humidity. They even held an 8-point fourth-quarter lead in the frigid climate and while Bills fans were pelting their sideline with snowballs.

Specifically, quarterback Tua Tagovailoa, with so many questions surrounding him in cold weather, held his own in a 17-of-30 outing for 234 yards and two touchdowns without an interception.

“We, as a team, handled the elements pretty well for a team that comes from 80-degree weather,” Tagovailoa said. “I think for our team, after this performance, we’re able to put that to rest that we can’t play in cold weather, or we can’t compete against cold-weather teams.”

That experience could come in handy, say, in two weeks, in Foxborough’s Gillette Stadium — or in a road playoff game at Cincinnati, Tennessee, Baltimore, Kansas City, or even a return to Buffalo.

Another thing that could help the Dolphins in inclement weather: They established the run game Saturday, even with Jeff Wilson Jr. sidelined to a hip injury. Raheem Mostert, on 17 carries, went for 136 yards, including 67 on one thrilling scamper. Salvon Ahmed had his moments, like his impressive 11-yard touchdown.

“I think it opened up things for us offensively,” Tagovailoa said. “We were balanced. We did have opportunities where we could run RPOs (run-pass-option plays), and then there were times where it’s, ‘Hey, mano a mano. You guys know we’re going to run with the personnel we have in the game,’ and we just try to out-execute the opposing team.”