Todays Though > News > Nolan Lazor has experienced the challenges and opportunities of an NFL coach’s son. Now he’s ready to be Vernon Hills’ starting quarterback.
News

Nolan Lazor has experienced the challenges and opportunities of an NFL coach’s son. Now he’s ready to be Vernon Hills’ starting quarterback. 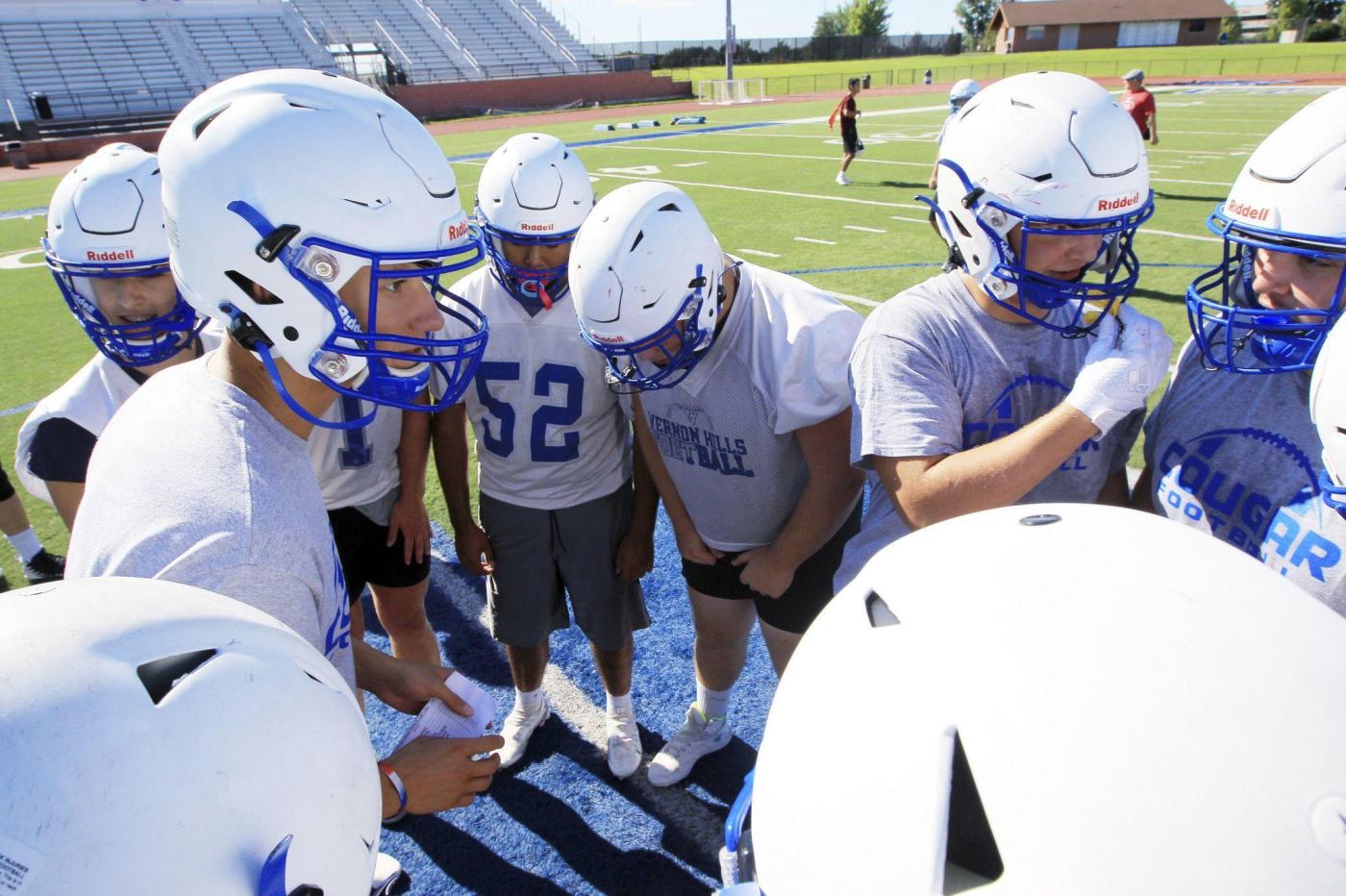 The August sun shines down from a clear blue sky as Vernon Hills quarterback Nolan Lazor plays catch with his teammates on the second day of preseason practice.

The lanky lefthander throws with the ease and confidence of a young man primed for what he believes will be a memorable senior season. The 6-foot-5, 190-pound Lazor projects the air of someone for whom the football field is a second home.

Lazor has been many places in his life, but football has been a constant. He is the son of longtime NFL coach Bill Lazor, who was the offensive coordinator of the Chicago Bears in 2020 and 2021.

The life of an NFL coach is inherently itinerant, so it’s no surprise that Vernon Hills is the eighth place where Nolan Lazor has lived. He was born in Leesburg, Virginia, just outside Washington, D.C., when his father worked for Washington.

“There’s a picture of me when I was just learning to walk, running around the Redskins’ practice fields with a football,” Lazor said. “Football has been so tied in with my life.”

Given his family background, people assume Lazor was destined to be a star quarterback.

His father was a three-year starting quarterback at Cornell, where he set 26 program records, and has worked mainly as a quarterbacks coach or offensive coordinator during a 20-year NFL career that also has included stints with the Atlanta Falcons, the Seattle Seahawks, the Philadelphia Eagles, the Miami Dolphins and the Cincinnati Bengals, as well as stops at Cornell, the University of Buffalo and the University of Virginia.

Lazor’s path has been far from easy. Football is a tough sport, and it’s not for everybody, but that’s what makes it appealing for him.

“I always say it’s fun to do difficult things,” he said. “I don’t want to go my whole life on the easy route, so I get to come out here, compete at this level, compete to get to the next level.

“It’s a hard thing to do. It’s very difficult. But I love developing that work ethic, and I love working for it. There’s not a minute that I’m out here or in the weight room that I dislike.”

Coaches and teammates have noticed and feed off Lazor’s enthusiasm.

“He’s got all the tools,” Bellecomo said. “You talk about the intelligence. He’s smart in the classroom, but he’s also got a very high IQ on the football field.

“It comes from growing up around the game, being around his dad his whole life. I’ve had the opportunity to coach many coaches’ sons. They just have a higher IQ for the game. It’s really a pleasure to coach that.”

Lazor has always had a close bond with his father.

He has benefited from the perks of being an NFL coach’s son — he has picked the brains of quarterbacks like Matt Hasselbeck and Nick Foles and has thrown with Justin Fields and Andy Dalton — but said he has gained the most knowledge from his father.

“I wouldn’t be anywhere near where I am without him,” Lazor said. “Over the past couple years, he’s helped me so much with my journey and just football itself.

“Me and my dad have sat down for hours and watched film and dissected these professional guys. We’ve been able to build a strong base. He’s taught me everything I know. I give him all the credit.”

Lazor, too, deserves credit for navigating a childhood that involved moving every two or three years. That has required him to change schools frequently, make new friends and adjust to new coaches and systems.

That would be a challenge for any kid, but Lazor doesn’t view it negatively.

“I’ve always had to go in and beat out a different quarterback, whoever was there. It’s helped me get an edge on that kind of stuff. I’ll go off to college, and I’m already used to going to a new school and new team and competing.”

Lazor enrolled at Vernon Hills for his sophomore year after his father was hired by the Bears, and his first football season with the Cougars was delayed until spring 2021 due to the coronavirus pandemic.

But he didn’t get the chance to play as a sophomore. During a basketball game, he put his arm down to break a fall and suffered a torn labrum in his throwing shoulder.

It was a devastating injury for a quarterback, but Lazor recovered quickly after surgery and played last season, sharing the play-calling duties with then-senior Jake Pieper.

To avoid overusing Lazor’s arm, Bellecomo used Pieper as a running quarterback while having Lazor play about half the time. Lazor completed 32 of 74 passes for 588 yards with six touchdowns and five interceptions. He also scored two rushing touchdowns for the Cougars (7-3), who lost to Prairie Ridge 49-0 in the first round of the playoffs.

“I didn’t think he’d be ready last year,” Bellecomo said. “He worked so hard to get back in eight months, which is unheard of for that kind of injury.

“He told me that every throw last year felt different. He had to reteach that arm.”

While he did that, Lazor also used his downtime wisely, staying positive and connected with his teammates.

“What I’m most impressed with is his attitude,” Bellecomo said. “Even when he tore his labrum, he’s like, ‘Coach, I’ve just got to work harder.’

“You take positives out of an injury, and it helped with his leadership skills. Any time you have to face adversity like that, I think it teaches you a lot about yourself.”

Lazor said his arm feels great and is stronger than ever. He competed in 12 college camps this summer in addition to the usual 7-on-7 showcases with the Cougars.

“I really know the system,” Lazor said. “I’m able to teach it to all the new guys, so it’s wonderful. I’ve developed a great relationship with all the coaches and players.”

The Cougars are primed to take advantage of Lazor’s experience. Even though all of their receivers graduated, they are aiming to win the Central Suburban North and make a deeper playoff run this season.

“Our team is great,” Lazor said. “Receivers Jack Ratajczyk, Anthony Martorano, Erik Boehmer, they all do a great job, and we have a phenomenal running back in Ben Choi.

“I feel really confident. It’s coming easy to me on the field right now, so I’m running with it and gaining confidence as we go.”

That confidence is rubbing off on Lazor’s teammates, who prize his leadership and encouragement.

“He’s very instructive,” Ratajczyk said. “He knows what you’re supposed to do, so if I do something wrong, he’ll correct me, and he’ll be able to tell me how I can improve myself.

Lazor has been working diligently with his receivers to create a bond.

“We’ve been working all summer on and off the field,” Ratajczyk said. “In the weight room, we’re always pushing each other to see who can do more. We just have a great connection.”

Lazor lacks a big ego. That, too, endears him to the Cougars.

“He’s very humble,” Ratajczyk said. “That’s the one thing that stands out about him. Nothing bad ever comes out of his mouth. He’ll take instructive criticism very well. If you tell him something, he’ll listen.”

Lazor, of course, also listens to his father, now more than ever. Bill Lazor always attends his son’s games, but after being fired by the Bears in January, he has more time to help out and is a volunteer coach for the Cougars.

“The timing was good,” Nolan Lazor said. “It’s a lot of fun having him here.”

“He’s been coaching us up,” Elster said of Bill Lazor. “He’s been a really big help. He was working with me on my long snaps and stuff like that. He’s just been a good influence on the team and definitely builds on the excitement.”

Bellecomo said he is thrilled to have Bill Lazor working with the Cougars.

“Bill was with us all summer,” Bellecomo said. “With his knowledge of the game and especially the quarterback position, it is just invaluable to have that kind of coach around and to be able to pick his brain. That’s awesome.”

Nolan Lazor has talked to college coaches from every level, including some Ivy League schools, and just received an offer from Roosevelt University.

Regardless of his future in football, Lazor has set himself up for success. He has a 4.33 GPA and plans to major in engineering in college.

But he won’t put an artificial ceiling on his playing potential.

“I don’t want to limit myself,” Lazor said. “I obviously want to go get a great education because I think I have a future beyond football.

“I’m really trying to find the best opportunity for me and get there. I just want to do great.”

Bellecomo foresees Lazor doing just that and said he is going to relish his final season coaching Lazor.

“The sky’s the limit for him,” Bellecomo said. “I think he’s going to have a great year just based on what I’ve seen so far. He just needs time on the field, and he’s going to get a lot of it this year.”

Matt Le Cren is a freelance reporter for Pioneer Press.