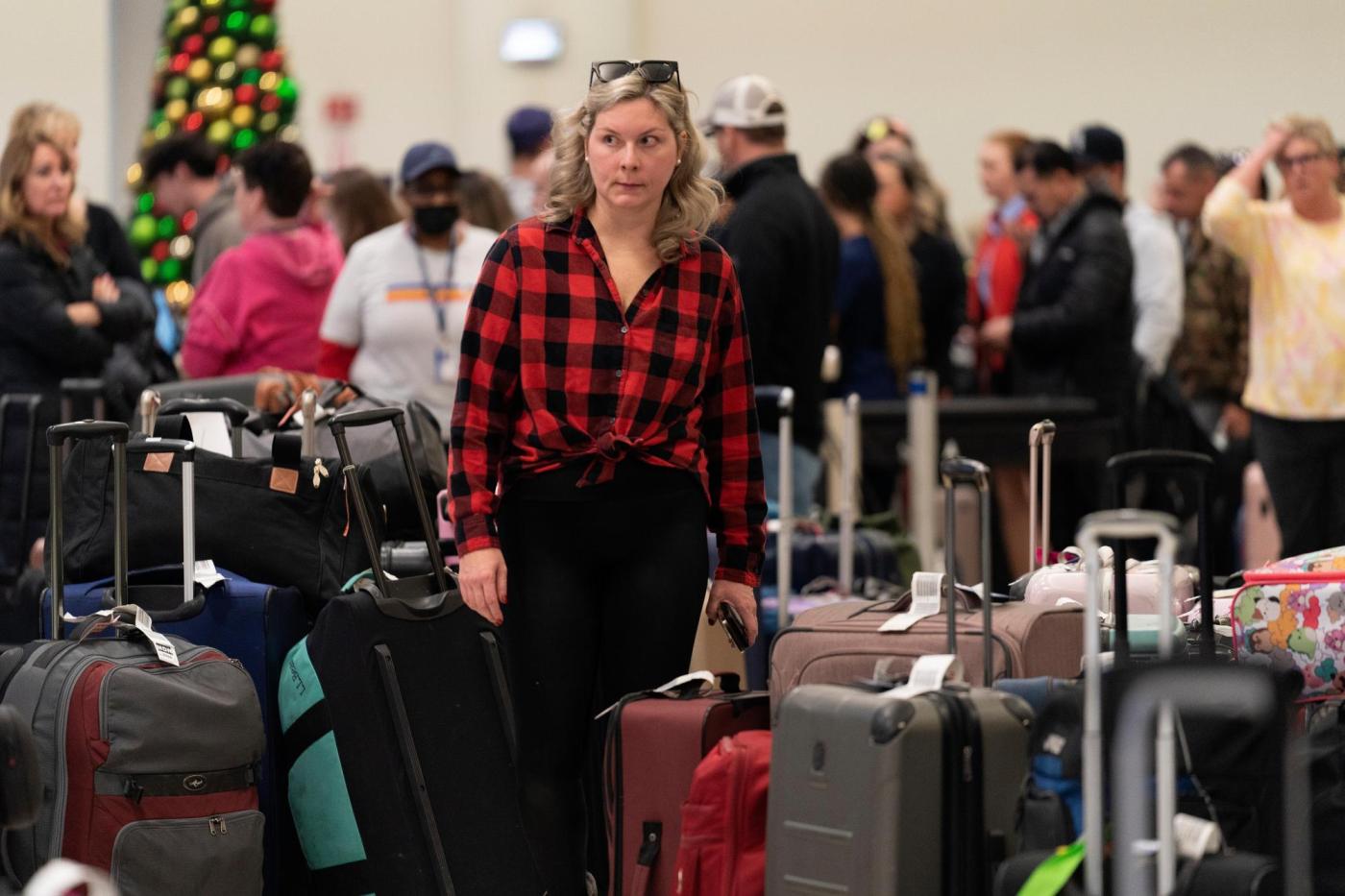 DALLAS (AP) — Southwest Airlines said it expects to return to normal operations Friday after slashing about two-thirds of its schedule in recent days, including canceling more than 2,350 flights Thursday.

Airline executives told employees that crew scheduling this week— a major cause of the meltdown — has been fixed.

Southwest is struggling to recover after being overwhelmed by a winter storm that left hundreds of pilots and flight attendants stranded out of position to operate flights.

It is likely that far more than 1 million passengers have been affected. Southwest has canceled more than 13,000 flights since its meltdown began on Dec. 22. Its planes have 143 to 175 seats and were likely nearly fully booked around the Christmas and New Year’s holidays.

Other airlines are back to full strength. Delta, American and United together canceled around 30 flights by late morning, according to tracker FlightAware.

Southwest’s cancellations amounted to 58% of its schedule, slightly better than in previous days. The Dallas carrier accounted for more than 95% of all canceled flights in the United States on Thursday. By Thursday afternoon, however, Southwest was showing only 39 canceled flights on Friday, according to FlightAware.

Southwest has acknowledged that it has inadequate and outdated technology that can leave flight crews out of position when bad weather strikes. But company executives told employees that problems with crew-scheduling have largely been fixed.

“Right now it looks like a pretty smooth operation as we head into this transition (Thursday) to allow us to resume operations on Friday at our normal schedule, which is a big step up,” Chief Operating Officer Andrew Watterson told employees by video Wednesday night.

The airline has declined requests to make executives available for comment and did not provide an update about operations on its website. Its main public outreach has been to post video statements by CEO Robert Jordan and its chief commercial officer.

Jordan faces a crisis just 11 months after he became CEO, replacing longtime leader Gary Kelly. Southwest had 88 planes and 7,000 employees when Jordan joined 35 years ago. Now it has more than 700 planes and more than 60,000 employees.

Speaking to reporters a month ago at Southwest headquarters in Dallas, a relaxed and jocular Jordan spoke in glowing terms about the airline’s culture and customer service. He outlined five priorities, including modernizing the airline’s technology for scheduling pilots and flight attendants.

“I do think the scale and the growth of the airline got ahead of the tools that we have,” he said. “No fault of anybody — takes investment — and we’ll get all this done.”

Jordan didn’t give a timeline or dollar figure for that investment, or explain why the airline had not already done the work. But his comments about the airline’s archaic crew-scheduling system seemed to foreshadow one of the major causes of the current meltdown — the inability to get pilots and flight attendants in position when there is a disruption to the operation.

“We have a lot of crews moving all over the country,” he said then. “If they get reassigned — they need to go to a different city or different flight than they thought, or they get reassigned to a new hotel — somebody needs to call them or basically in the airport chase them down and tell them what their re-route looks like.

“So at our size and scale, that’s just not OK.”

The federal government is investigating what happened at Southwest.

Southwest added a page to its website specifically for stranded travelers, and it invited customers to submit receipts for unexpected expenses. The airline said it would consider reimbursing “reasonable” expenses for meals, hotel rooms and alternate transportation incurred between Dec. 24 and Jan. 2. Consumer advocates criticized the use of the word “reasonable” as too vague.

Thousands of customers have been unable to reach the airline this week, as Southwest’s phone system was overwhelmed. Pilots and flight attendants also reported being put on hold for hours.

Investors appear to think that Southwest might finally be getting a handle on the crisis. The company’s shares rose 4%, but they’re still down nearly 8% for the week.

The airline has not given an estimate for how much revenue it has lost and how much extra cost it will incur – Transportation Secretary Pete Buttigieg and some members of Congress are demanding that Southwest pay stranded travelers for hotel rooms, meals and replacement flights they booked on other airlines.

One indication of the price tag: Southwest said a disruption in October 2021 cost it $75 million. That meltdown was far smaller, resulting in about 2,000 canceled flights over a four-day stretch. Back then, as this week, Southwest’s solution was to cut its schedule to stabilize the operation.

Southwest has been the most profitable U.S. airline so far this year, earning $759 million in net income through September.

Raymond James airline analyst Savanthi Syth said Thursday that she still expects the company to post a small profit in the fourth quarter, but that some consumers are likely to switch from Southwest to other airlines over the next few months when booking travel.

Another airline analyst, Colin Scarola of CFRA, said he too didn’t expect the “Christmas week fiasco” to have a lasting impact because Southwest often has lower fares than its three largest rivals: American, United and Delta.

“History shows customers tend not to permanently ditch an airline even after an awful experience due to the commodity-like nature of the product,” he wrote in a note to clients.