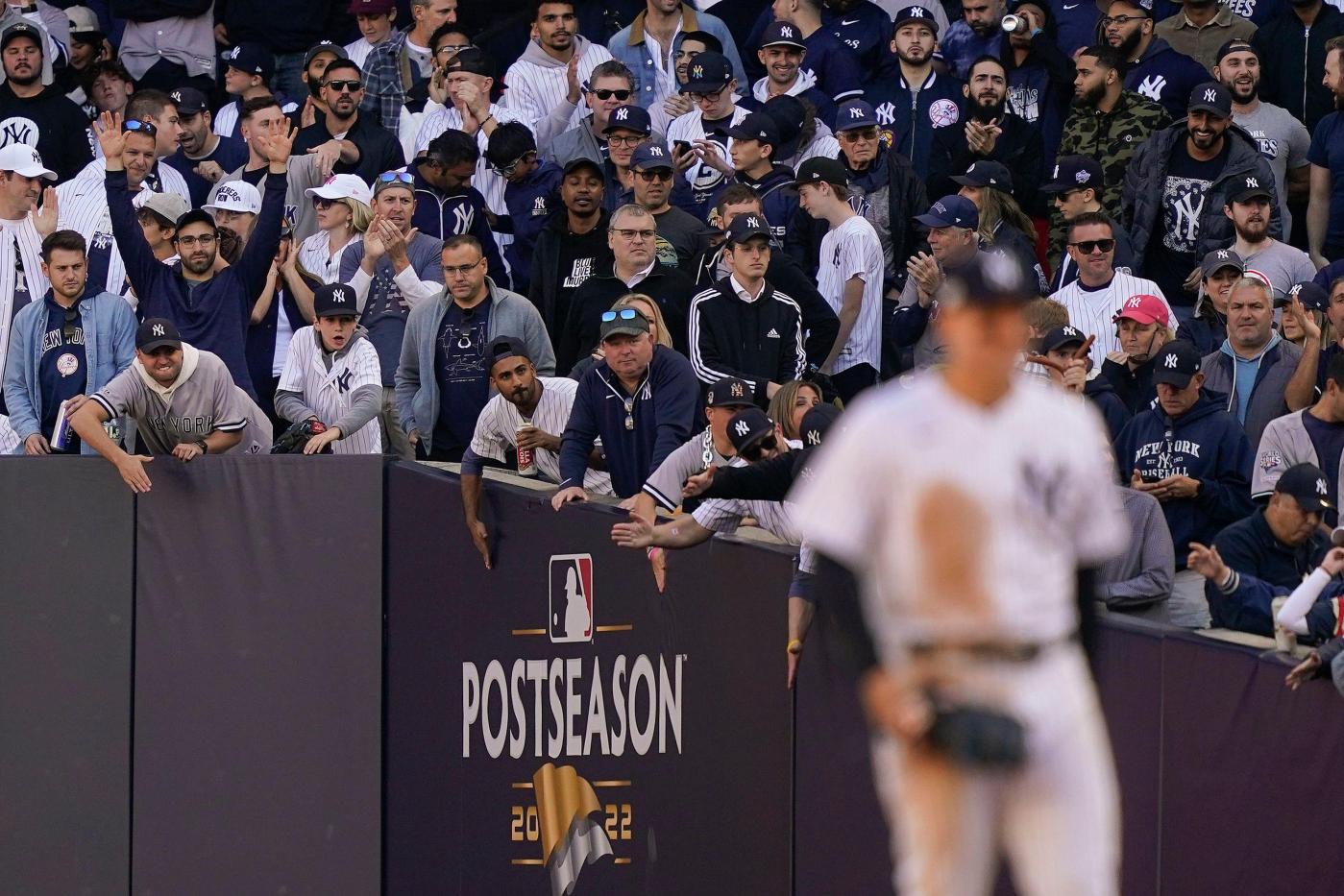 It’s their team and they’re absolutely not happy right now, or having much fun since July, back when they were still outkicking their coverage. Put it another way: Yankees fans aren’t spoiled or entitled or great big babies because they expect their team to give them a great October once in a while, no matter how many games they’ve won getting there.

The Yankees are who they are now under this owner and this general manager. And who they really are, in a lot of ways, is Notre Dame football. Notre Dame wins a lot of games and gets to the final four every so often, same as the Yankees just did. The Yankees play more big games every season than Notre Dame does, one hundred percent. They just don’t win them. In a lot of ways, the Yankees are a far more successful version of the Dallas Cowboys, who have all that America’s Team mystique of their own, just no trophies lately.

Would Notre Dame fans rather be the Yankees? Sure. So would Cowboys fans. Yankees fans don’t care. They’re not rooting for those teams. They’re rooting for their team and every year, every single one, they’re not just sold romance and history, they’re sold World Series or bust, whether the people in charge put it that way or not. That doesn’t just mean winning the division once in a while, winning a 5-game series against another JV team from the AL Central.

Should some fans at the Stadium have booed Aaron Judge, maybe all the way out of town when it’s all said and done? Of course not. The ones who did boo Judge after the season he just had (even if the weight of it clearly cost him and his team in the end) made everybody sound bad. But what you really heard, even during those moments when they did go after their 62-home run darling and the face of the team, was just how angry they are, at Steinbrenner, at Brian Cashman, at Aaron Boone, at a team that so dramatically, almost historically, went from being overachievers to underachievers.

Did the other players hear that kind of noise? They heard it good. But those crowds at Yankee Stadium — and please spare me with descriptions of how “toxic” it all was, as if these were the feelings of delicate flowers being bruised — were yelling just as much at the owner, and the general manager, and the manager as much as they were the players on the field.

By the way? The world needs to move on from comparing Hal Steinbrenner to his old man. But the one thing you can say about the old man, though, is that George was a loud, ornery fan himself, just the one who happened to own the most famous sports team in the world. His son isn’t a fan. He doesn’t seem to like baseball very much. Or change. So here we are, and ornery Yankee fans are now going to be sold the new plan that is going to make them something more than contenders next season, and make them more than a team that has lost five straight championship series over the past decade or so.

Once again you will read and hear that the only solution is for Hal to spend more money than he already is. But the guy does have a right at this point, with this general manager, to want to know just how much is enough. Over the 19 years since Josh Beckett blew the Yankees away in Game 6 of the 2003 World Series, Cashman has been allowed to spend nearly $4 billion dollars on baseball players. Billion with a b. This year Cashman spent $263 million in adjusted salaries, even if around 20% of that went to Josh Donaldson, Aroldis Chapman and front-office darling Aaron Hicks.

Again: Four billion dollars since the Yankees got clipped by the Marlins. One World Series appearance to show for it. The last non-AL Central team they defeated in a postseason series was the Baltimore Orioles. That was in 2012 and they needed CC Sabathia to pitch a gallant complete game against the Orioles in Game 5 to win that time.

And when everything was on the line against the Astros at the Stadium on the last weekend of the Yankees’ season, the only legit product of the vaunted Yankee farm system on the field was No. 99.

Since that ‘03 World Series, the Astros have made it to the World Series five times, even managing to do that from both leagues. Somehow they’ve managed to make their way through the crapshoot gauntlet that we always hear about in October from teams that aren’t quite good enough the way the Yankees are never quite good enough. The San Francisco Giants, who might have No. 99 playing for them next season, have won three World Series since the Yankees last won one. Starting in ‘04 the Red Sox, of course, have won four Series to the Yankees’ one and twice — in ‘18 and ‘21 — ended the Yankees’ season, once at the Stadium and once at Fenway in a Wild Card game.

Everybody knows that the Yankees kept winning the World Series after Cashman became general manager. But what he mostly did in those early years on the job was keep the line moving. The one time he personally engraved the trophy was in ‘09, a year when he spent $450 million in offseason money for Sabathia, Mark Teixeira, Allan James Burnett. The closest Cashman’s Yankees have come to the World Series since was Game 7 against the Astros in 2017.

“The only thing that derailed us was a cheating circumstance [from the Astros] that threw us off,” Cashman said this spring.

But what about all the other years?

The Yankees never have a losing season and never have a season when they win it all. They were 64-28 this season and then they were 35-35 over the rest of the regular season and then they were 3-6 in October. Now, ironically, Cashman’s contract has expired as Boone is still working off the extension he signed last season. And the soundtrack with which they all leave the season, the owner and his GM and the GM’s hand-picked manager and the ‘22 Yankees, is the booing.

We keep hearing that Yankee fans are spoiled. But how can they be spoiled when their team doesn’t win championships anymore? They’re just mad. They want more than just the “aura and mystique” about which Curt Schilling once said before the Diamondbacks beat the Yankees in a World Series. They want a parade. They want to be more than the Cowboys when the biggest games are played. Be more than the New York Fighting Irish.

BEATING BILL WOULD BE BIG STEP FOR JETS, TOM A GRUMPY OLD MAN & IT COULD JUST BE BRYCE’S TIME …

Wait a second, the Giants have to worry about Geno on Sunday?

And I don’t care how the Patriots looked on Monday night against the Bears, or how bad Mac Jones has looked so far this season.

If the Jets can beat Bill Belichick at MetLife, it is going to feel like the biggest win in 10 years.

Bigger than beating the Packers at Lambeau.

Bigger than anything else they’ve done lately.

If you stop by here on Sunday, you know I’ve been bingeing “The West Wing” lately.

I’m up to Season 3 this week, and all everything I’ve seen so far does is reaffirm that there has never been a more gifted writer in television history than Aaron Sorkin.

This has nothing to do with what’s happening in Tom Brady’s personal life.

Nope, this is about what’s happening with the Bucs.

And what’s happening with the Bucs has turned Brady into a grumpy old man.

As my friend Stanton says, who would have ever penciled Brady and LeBron in on the pathetic side of goodbye?

Year in and year out, nobody does a better job of coaching his team than Mike Vrabel.

But when you look back on the Giants season, and how they got to 6-1, and you really do wonder how all of this would have played out if they hadn’t made the two-point conversion that Coach Dabs called at the end against Vrabel’s Titans.

Ben Simmons really does have a wonderful skill set on the basketball court.

If you were watching Nets-Mavs game on Thursday night, you saw the way he swallowed up Luka at the end of regulation when Luka took the ball to the hoop.

But I really do want to challenge Ben to a game of H-O-R-S-E.

If Brandon Nimmo is leaving, and maybe if he’s not, I hope the Mets go after Trea Turner.

Or maybe go after Carlos Correa and let him come play third base at Citi Field.

There’s a guy running for the United States Senate in Georgia, Herschel Walker, whom you could stump by asking him how many children he has.

You know what’s going to happen when they expand the college football playoffs?

They’re going to steal magic and drama from their regular season.

Justin Verlander pitches in the World Series the way Alex Rodriguez used to hit in all his postseason series until October of 2009.

For all of the ways to evaluate Phillies vs. Astros, in the end there might be one overriding factor in favor of Philadelphia:

If you have not read Paul Newman’s extraordinary posthumous memoir — “The Extraordinary Life of an Ordinary Man” — you really ought to.

Kyle Tucker probably wondered what he had to do to win Game 1.

For all of that aura and mystique around the Yankees, you want to know the last top-of-the-list, king-of-the-hill star free agent who wanted to come play baseball for the Yankees?