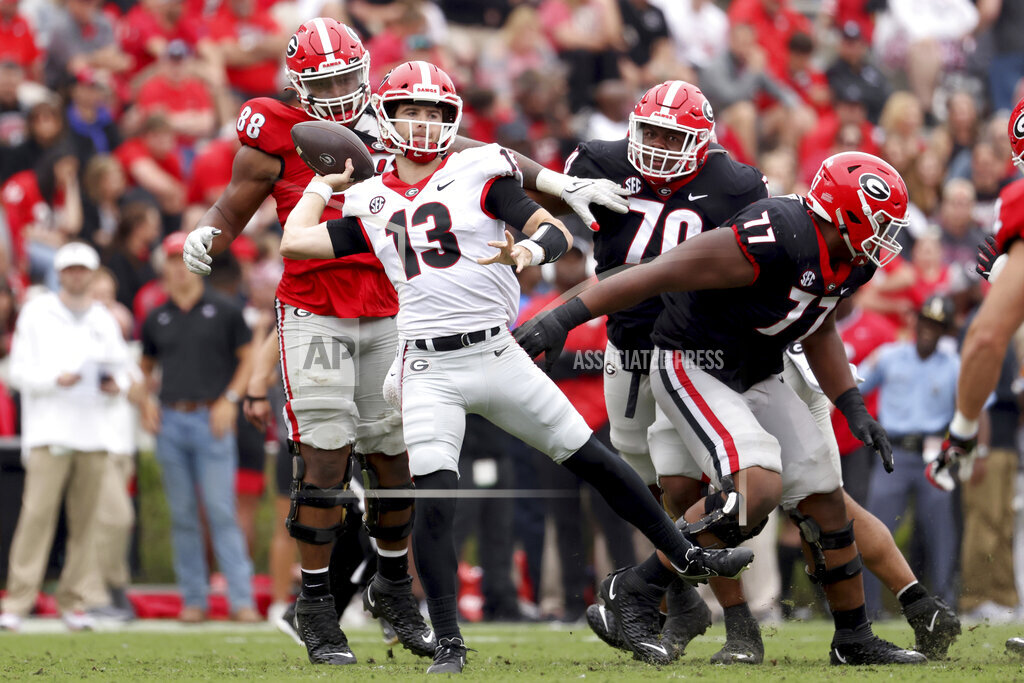 Last season, this column projected both Ohio State and Alabama to miss the College Football Playoff. Bold? Dumb? The line is fine.

One out of two isn’t bad, but in some ways the one that ended up being wrong felt more right.

While the Buckeyes did turn out to be vulnerable, the pick here to win the Big Ten and reach the playoff for the first time was … Wisconsin. The Badgers went 9-4 last season and didn’t even win their division. The Buckeyes lost to Oregon early and Michigan late.

As for Alabama, the theory behind the Crimson Tide missing the CFP was that it would lose a regular-season game — most likely at Texas A&M — and then Georgia would eliminate Nick Saban’s team by winning the SEC title game.

That looked like a good call when the unbeaten and favored Bulldogs went up 10-0 in the second quarter in Atlanta. Then Bryce Young carved up Georgia’s vaunted defense and it became yet another example of the perils of picking against ‘Bama.

Some redemption came in the CFP title game, when Georgia — as predicted here in the preseason — won the national title.

While it’s cool to be right, predictions are mostly made for fun. Straight chalk is boring, but last season’s volatility that included Ohio State, Clemson and Oklahoma having long conference championship streaks snapped might be tough to repeat. With all that in mind:

Three teams that will start the season ranked in the AP Top 25 but finish unranked:

— No. 12 Oklahoma State. The super seniors and coordinator that powered one of the best defenses in the country are gone and the Big 12 is always unpredictable.

— No. 16 Miami. Hurricanes haters get one more year of mocking how the U. is Back! Might want to get it out of your system, though, because Miami under Mario Cristobal is not likely to be mediocre for much longer.

— No. 19 Arkansas. The SEC West is a gauntlet and somebody is going to be disappointed. You’re it, Razorbacks.

Three teams that will start the season unranked but finish ranked:

— Penn State. On the way to building toward something big in 2023, James Franklin and the Nittany Lions bounce back from two lackluster seasons.

— UCF. The Knights have been usurped by Cincinnati as kings of the AAC and Houston is the buzzy G5 team heading into this season. But UCF looks loaded in Year 2 under Gus Malzahn.

American Athletic Conference — Houston over UCF. The future of the Big 12.

Atlantic Coast Conference — Clemson over North Carolina. What better way to end divisional play in the ACC than Clemson beating the fourth-best team in the conference?

Big 12 — Kansas State over Oklahoma. Score one for the leftovers.

Big Ten — Ohio State over Minnesota. The West Division will come down to a fun, four- or five-team scramble and the winner’s reward is a beatdown from the Buckeyes in Indianapolis.

Conference USA — UAB over UTSA. (Insert joke about how difficult it is to remember who is still in C-USA).

Mid-American Conference — Toledo over Miami (Ohio). Picking the favorites in the MAC is never a great idea, but here we are.

Pac-12 — Oregon over USC. A first-year coach wins the Pac-12. Just not the one getting the most attention.

Sun Belt — Appalachian State over Southern Mississippi. The Mountaineers return to the title game for the fourth time in five years, this time against Sun Belt newbie Southern Miss.

Nebraska gets off to an encouraging start in coach Scott Frost’s make-or-break season, but stumbles down the stretch against a difficult closing schedule (Minnesota, at Michigan, Wisconsin and at Iowa). The school parts ways with the hometown hero. Next up for the Cornhuskers? How about Matt Campbell from Iowa State?

Ohio State over Alabama. The Buckeyes win a rematch of the 2020 CFP championship game, with C.J. Stroud outdueling Bryce Young.