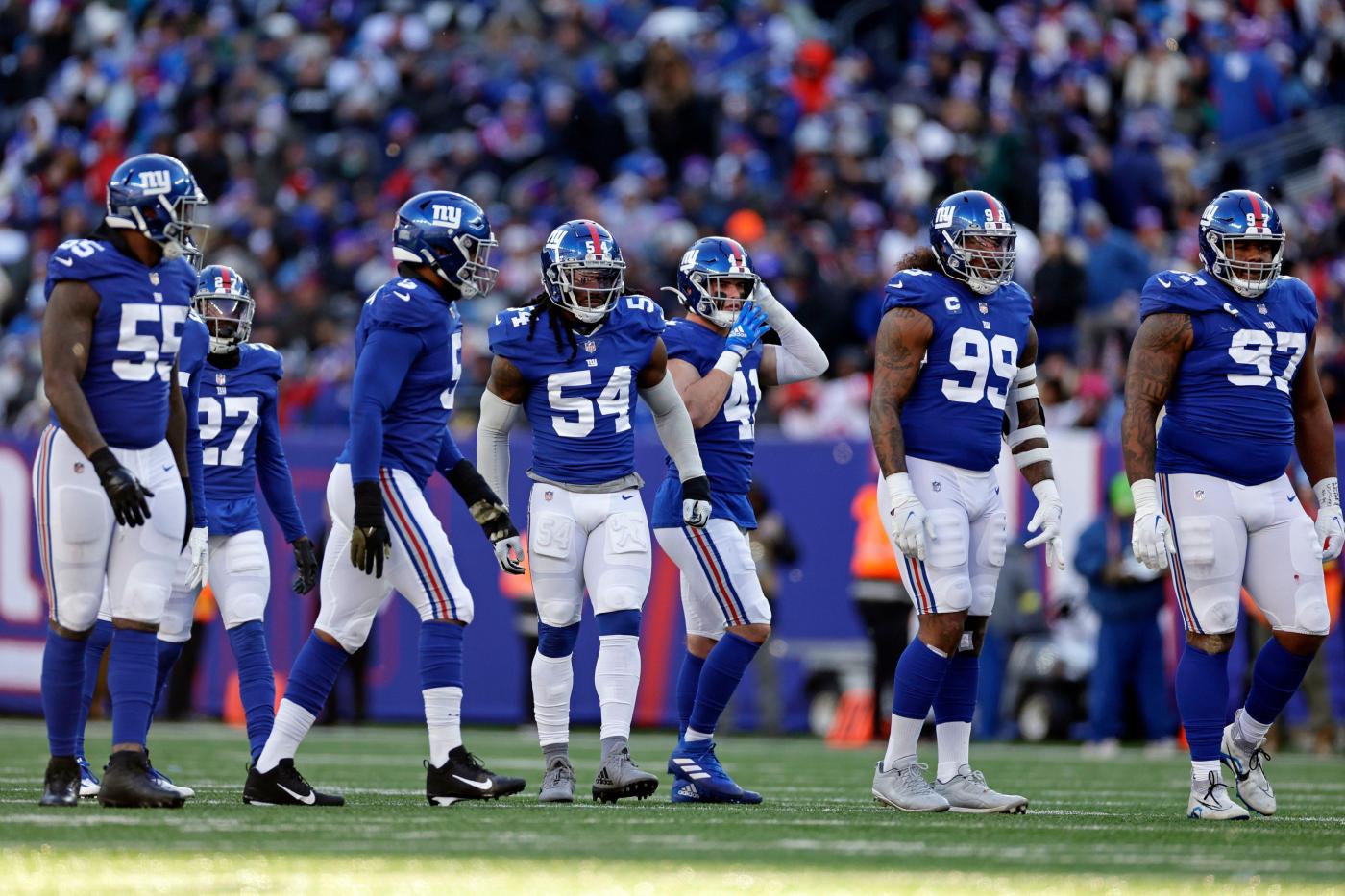 Injuries have caught up to the Giants’ defense, and Wink Martindale’s unit has hit a wall.

The Giants have allowed an average of 28.6 points per game in their three losses the past four games.

They hadn’t allowed 25 points to an opponent in their first seven games, and in the past four games, they’ve surrendered 27 to Seattle, 31 to Detroit and 28 to Dallas.

In the other game, Houston Texans QB Davis Mills — who just got benched for backup Kyle Allen — threw for 319 yards on the Giants’ defense and diced them up in the second half. Only two red-zone turnovers held Houston to 16 points.

Kayvon Thibodeaux said no one is using injuries as an excuse.

“If you go in feeling shorthanded, you’re gonna lose every time,” he said after Thursday’s 28-20 Thanksgiving Day loss at Dallas. “So for us it doesn’t really matter who steps in and who has to make plays. We all have confidence in each other.”

Still, the absences of top outside corners Adoree Jackson (sprained right MCL) and Fabian Moreau (oblique) were impossible to ignore in Thursday’s second half.

Safety Julian Love and corner Rodarius Williams both intercepted Dak Prescott in the first half. And Nick McCloud, Cor’Dale Flott, Darnay Holmes, Williams, Jason Pinnock and Love fought hard on the back end.

But playing reserves as starters behind a suspect linebacking corps, with Micah McFadden and Tae Crowder rotating alongside Jaylon Smith, made for an unsustainable product.

They had no answer for Cowboys top receiver CeeDee Lamb (six catches, 106 yards) or Dallas’ tight ends, who accounted for three touchdowns — two receiving by Dalton Schultz and one rushing by Peyton Hendershot.

The defense is expected to get edge rusher Azeez Ojulari back off injured reserve from a calf injury next week against Washington. But Martindale’s magic can only conceal so much.

They’re still down safety Xavier McKinney (left hand) as well due to his bye-week accident in Cabo.

All of the Giants’ defense’s strengths were suddenly weaknesses Thursday.

Leonard Williams cited four elements that were subpar against the Cowboys: their work on third down, in the red zone, against the run, and in the penalty department.

Dallas was 7-for-11 on third down and 4-for-4 in the red zone. The Cowboys had 169 rushing yards. And the Giants’ defense committed four penalties.

“They are professionals, too,” Holmes said of the Cowboys receivers. “You have to take that mindset of [there’s] certain things you can’t get mad about. Certain things can’t waiver your confidence or your belief in yourself. That’s just what it was.”

Jackson’s long-term absence — after he got hurt returning a punt against the Lions — is going to continue to hamper the Giants’ ability to handle top receivers like Washington’s Terry McLaurin and the Philadelphia Eagles’ dynamic duo of A.J. Brown and DeVonta Smith.

The Giants’ offense also is not a unit built to score 30 points a game, even when Saquon Barkley is producing, which he is very much not at the moment.

Williams said it was a good sign at least that the Giants showed resilience.

“I think the defense showed a lot of tenacity and fight and want-to and willpower that you want to see in a team,” he said. “Even though we were losing, we didn’t roll over. We kept fighting. And that’s the type of fight you’re gonna need in the long run.”

The team has nine days between games to rest up, too. So hopefully they can nurse some wounds (they lost Flott to a concussion Thursday).

But the Giants understood how “unacceptable” this performance was. That was a word that Smith and Williams both used to describe how they failed to finish.

“It bothered me. It bothered all of us,” Thibodeaux said. “Just being there at halftime and then the game getting away from us. It’s Thanksgiving. It’s a big day for everybody. We’ve dreamed about playing on these type of days so it [doesn’t] feel good when you can’t come out with the outcome you want.”

HOPING FOR STARTERS BACK

Brian Daboll gave players off Friday and canceled their conference calls. He also moved his Zoom call up earlier to a time when most of the traveling local media was in transit home from Texas.

But he took 19 questions from those who could make it. And he seemed optimistic that the team could get four players back from injury against Washington: Ojulari, right tackle Evan Neal (sprained MCL), left guard Ben Bredeson (sprained PCL) and tight end Daniel Bellinger (eye).

Daboll continued to stonewall any questions about Odell Beckham Jr., even though the free-agent receiver is reportedly planning to begin his tour of visits with the Giants next week.

“I’ll keep that in-house right now,” Daboll said. “That’s kind of where we’re at with it. I’m going to talk to [GM] Joe [Schoen] here. Joe is out on the road at some schools. So Joe and I will reconvene later today.”