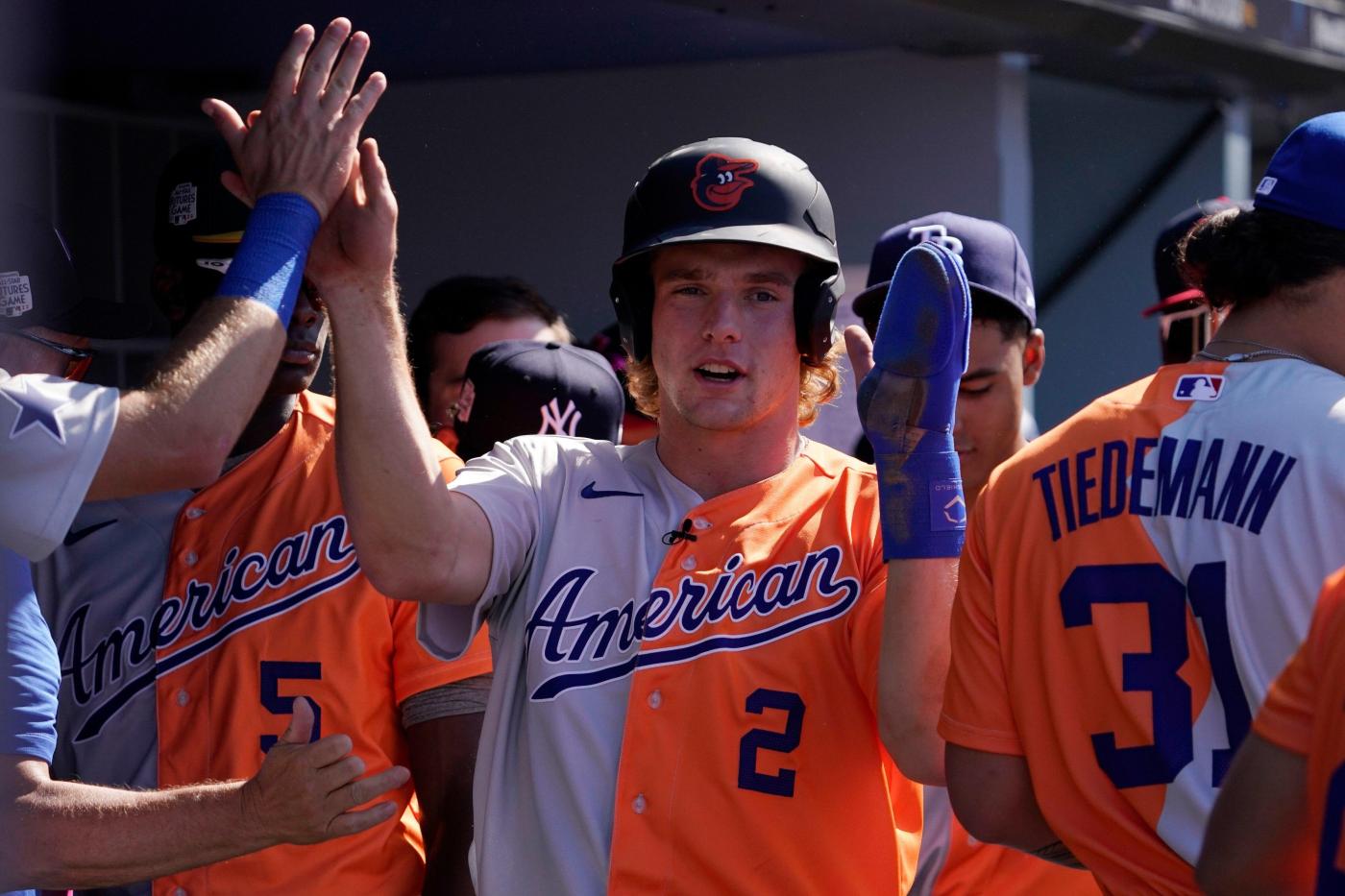 As much as the Orioles’ fanbase begged for him to join the club’s major league roster and has since pleaded to watch him every day, Adley Rutschman won’t catch every game. Baltimore’s roster construction will likely keep the face of the franchise from the designated hitter spot most times, as well.

But those days mean Rutschman can be a weapon off manager Brandon Hyde’s bench, as he proved Saturday in rocketing a pinch-hit home run in the eighth inning to tie a game the Orioles went on to win, 6-4, over the Tampa Bay Rays. Rutschman also lofted a go-ahead sacrifice fly in the top of the 10th before Ryan Mountcastle hit a game-winning two-run single in the 11th.

The victory guarantees the Orioles (46-45), fresh off a 10-game winning streak, will finish the first half of the season with a record of .500 or better. It also snapped Baltimore’s streak of 10 straight losses at Tropicana Field.

Friday’s series-opening defeat marked the first time Rutschman played at the Rays’ home field, and with a game the next afternoon, he was held out of Saturday’s lineup. The Orioles had days off Monday and Thursday, but the 24-year-old rookie had otherwise caught every defensive inning of five games through a seven-day stretch.

With Baltimore trailing 3-2 entering the eighth and the Rays bringing in right-handed reliever Jason Adam for a platoon advantage against the bottom of the Orioles’ order, Hyde called on the switch-hitting Rutschman. In smacking a 2-0 fastball out to right field, Rutschman provided the Orioles’ first pinch-hit home run in more than a year. He then stayed in the game behind the plate, helping reliever Dillon Tate out of a jam by throwing out Randy Arozarena attempting to steal third.

Two innings later, his fly ball to center did just enough to score Austin Hays from third base, but Ji-Man Choi’s single up the middle evened the game in the bottom half. The Orioles started the top of the 11th with Rougned Odor automatically at second, only for him to be caught too far off the bag on Jorge Mateo’s empty bunt attempt. Mateo made up for it with a triple, but he waited there for three batters before Mountcastle scored him and Cedric Mullins with a bloop into right. Mountcastle did the Orioles’ signature hand binoculars before energetically throwing his arms in the air.

Joey Krehbiel recorded the last out to strand two runners he inherited from Cionel Pérez, finishing the bullpen’s seventh inning without allowing an earned run. It was Krehbiel’s first career save, coming against the organization the Orioles claimed him off waivers from last year.

All of the Rays’ runs in regulation came in the first three innings against right-hander Dean Kremer, who was making his first major league appearance at Tropicana Field. He was set to pitch at the ballpark in the first series of the year, only to suffer a left oblique strain while warming up.

He got through his pregame bullpen without issue, but not the first inning. Maryland product Brandon Lowe, back in the Rays’ lineup for the first time in two months after suffering a back injury, dropped a bunt single, went to third on Harold Ramírez’s single and scored on a wild pitch from Kremer, one of his 32 offerings in the opening frame.

An inning after the Orioles evened the score with doubles from Anthony Santander and Ramón Urías, Lowe opened the third with a single. He advanced to second when Kremer hit Ramírez with a pitch, prompting the pitcher to yell into his glove. He bounced back with a double-play grounder, but Lowe again scored from third when Kremer threw an 0-2 cutter in the dirt to Arozarena, who hammered the next pitch to left for his 12th home run in 29 career games against Baltimore.

Kremer at last worked a clean inning in the fourth, after which Tyler Nevin’s RBI single got the Orioles within a run. Austin Voth, moved to the bullpen as the Orioles capitalized on days off before the All-Star break to get veteran Jordan Lyles another start, combined with Keegan Akin, Tate and Jorge López to record the next 15 outs and send the game to extras.

Choi’s game-tying single in the 10th came off López, but the Orioles’ All-Star closer allowed no further damage to set up the decisive inning.

>> Gunnar Henderson, the Orioles’ No. 2 prospect and No. 7 in the sport per Baseball America, hit leadoff and played third base for the American League team in the All-Star Futures Game in Los Angeles on Saturday. In his first plate appearance, he drew a walk, something he has frequently done this year with Double-A Bowie and Triple-A Norfolk, then went from first to third on a pitch in the dirt and scored on a single for the game’s first run.

>> Infielder Anthony Servideo, Baltimore’s third-round pick in 2020, was placed on Delmarva’s injured list. He’s played 15 games between the Florida Complex League and Low-A since returning from a core muscle surgery.

>> Right-hander Travis Lakins Sr., on the 60-day injured list with right elbow inflammation, suffered a setback while rehabbing in Florida.