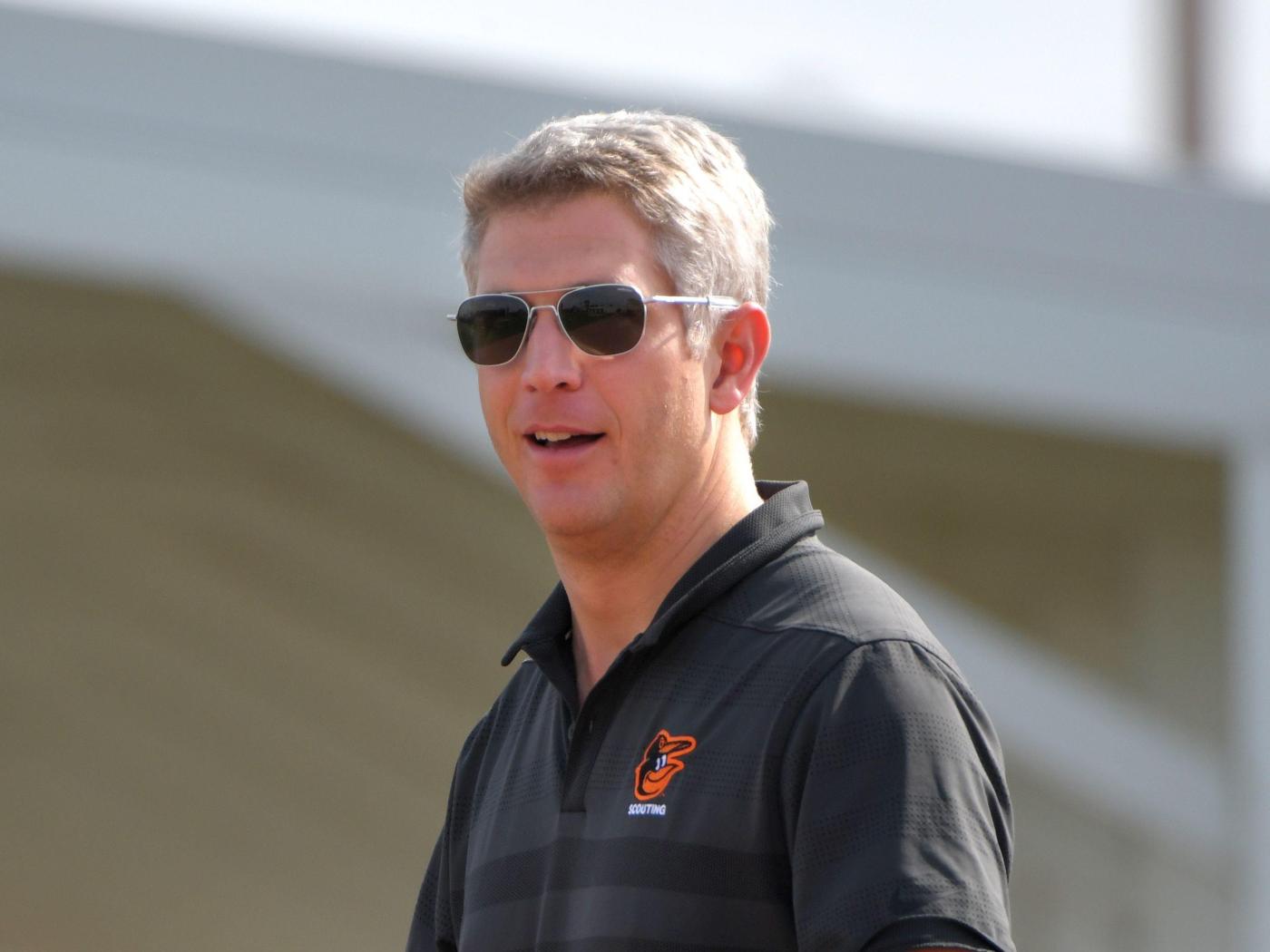 The Orioles completed the 2022 Major League Baseball draft Tuesday with their picks in the 11th through 20th rounds.

Baltimore had the opening selection of each round, having started the draft by taking Oklahoma prep shortstop Jackson Holliday with the first overall pick Sunday night before grabbing college players with each of their next 11 selections.

The Orioles have the second largest bonus pool in modern MLB draft history, with that total determined by the value of their picks through the first 10 rounds. The signing bonuses for players taken Tuesday only count toward the Orioles’ pool if they sign for more than $125,000.

Baltimore finished its 22-pick draft with 12 pitchers, the organization’s most through 20 rounds of any of the four drafts under executive vice president and general manager Mike Elias. Including Holliday, the Orioles selected four infielders, as well as four outfielders and two catchers. Holliday was one of two high schoolers among their picks.

“If you take a look at the class as a whole,” director of draft operations Brad Ciolek said, “obviously the key focal points for us, aside from adding talent to the farm system, is find guys that were solid defensively up the middle, especially yesterday and today with position players, and pitchers as far as guys that, arsenal-wise, we think that we can help improve upon, whether it’s their fastball, their breaking ball, and a lot of those picks you saw today kind of had that in mind.”

Here’s a breakdown on each of the Orioles’ Day 3 draft picks:

Skinny: The Orioles pick another right-handed pitcher in Showalter, who Baseball America ranks as the draft’s 209th overall prospect. Showalter, a South Florida commit who has no relation to former Orioles and current New York Mets manager Buck Showalter, averages 91-95 mph on his fastball. According to Baseball America, scouts said the fastball has been his dominant pitch, causing many swings and misses. His offspeed pitches remain a work in progress.

Skinny: The 6-foot-6 Brehmer ended the 2022 season strong after having an ERA over 6.00 in May. In his final game as a Hoosier, he allowed just one run in a complete game against Illinois in the Big Ten Tournament. He finished with a 5-4 record and 5.30 ERA across 17 games (14 starts) this past spring in his first year in the Big Ten. The Indianapolis native transferred from Wright State to Indiana for his senior season. The right-hander was previously picked by the Orioles in the 23rd round in 2018.

Skinny: If the Orioles were fielding a basketball team, Elias just found his center. Beck is 7 feet tall and 225 pounds, and he would be the tallest player in MLB history should he reach the big leagues. His fastball sat in the upper 80s to low 90s, though Ciolek said the Orioles saw him get up to 95 mph later in the season, and Baseball America reports his size helps him create both life and deception on the pitch. Beck recorded a 3.95 ERA over 13 starts this past spring, striking out 105 batters and walking 31 in 68 1/3 innings.

Ciolek’s take: “Jared’s a really interesting case. Brandon Verley, our scout in Florida — [Beck’s] at Saint Leo, which is a smaller Division II school — saw him and he was 88 to 91 [mph]. And the stuff really ticked up a little bit later on, actually reaching up to 95. We think that we can help his breaking balls, as well, and he’s also got a changeup that he’s been working on. Obviously, he’s a little bit of a bigger guy, and that might take a little bit more in terms of delivery, refining his mechanics, but I have the utmost faith in our player development staff, our pitching coaches that they’ll be able to get the most out of his ability.”

Skinny: The Orioles drafted Retzbach after his power-hitting numbers improved in the 2022 season. After hitting seven home runs in his first two college seasons, Retzbach hit 11 this spring and batted .293 with 46 RBIs. He also struck out 36 times, 10 fewer than in 2021 despite more than 30 additional at-bats. The 6-foot-4 catcher started all 105 games he appeared in at Lehigh.

Skinny: The Daily Gamecock, South Carolina’s student newspaper, reported Hicks had season-ending Tommy John elbow reconstruction surgery in March, but coach Mark Kingston said he expected Hicks to return for the majority of the 2023 season. Whether he chooses to return to South Carolina or sign with the Orioles, Hicks is set to miss significant time before pitching in a game again. The 6-foot-2, 190-pound right-hander transferred to South Carolina from Crowder College, a junior college in Missouri, for the 2022 season and only pitched twice before the injury. He finished with an 0-1 record and allowed four runs over seven innings. After his 2021 season with Crowder, Hicks earned First Team All-Region and All-District honors.

Skinny: In two years with the Hokies, the 6-foot-1, 185-pound right-hander went 8-0 in 48 appearances with a 4.40 ERA. Firoved came to Virginia Tech from Northwest Florida State and pitched entirely as a reliever in Blacksburg. The Virginia Beach native faced 223 batters in 2022 and struck out 32% of them. He turns 23 in September.

Skinny: At this time a year ago, Young was widely considered a potential top-10 pick in this draft, coming off a year he slugged .559 with 16 home runs for the national runner-up. Then the 6-foot, 180-pound shortstop struggled in the 2022 season before announcing in June he would transfer to LSU. Young’s batting average declined each year at Vanderbilt; in 2022, he hit just .207 with 26 RBIs in 56 games. Should the Orioles sign him, they would be gambling on the switch-hitter living up to the potential that once had him near the top of mock drafts. Baseball America still regarded Young as a top-200 player.

Ciolek’s take: “Obviously, whenever you have a guy that has proven himself that he can play in the SEC, is a capable defender at shortstop, and has shown power — not so much potentially this year, but last year. Had a little bit of a down year this year, so that’s potentially why he dropped, but we’re really excited to add him to this class, and we’ll obviously see what happens as we open negotiations and go from there.”

Skinny: Ranked among the top 150 players in the draft by MLB Pipeline and Baseball America, Walters was one of the best relievers in the county this past spring and could also be difficult to sign. He relies on his fastball, throwing it almost 90% of the time, according to MLB Pipeline’s scouting report, but it’s a dominant pitch that can touch 100 mph. The 6-foot-4, 220-pound reliever struck out more than half the batters he faced and had a whiff rate of over 40%. Walters lacks any consistent pitch outside of his fastball, but had 14 saves with the Hurricanes this past spring. He came to Miami from junior college, and a move to the bullpen in Coral Gables turned him into a draft prospect.

Skinny: Mathes was a two-way star for Richmond this past spring, batting .344 and recording a 3.35 ERA on the mound. He was successful as a pitcher with 58 strikeouts in 43 innings this past season, including six starts, but he’s being drafted by the Orioles for his bat. In three years with the Spiders, Mathes hit .333, including .344 in 55 games this spring with 10 home runs and 59 RBIs. At 6-foot, 195 pounds, Mathes bats and pitches left-handed, and he still has two years of eligibility at Richmond if he chooses to return to school.

Skinny: Sharp was drafted previously by the San Francisco Giants in the 28th round in 2019 after dominating the Indiana high school playoffs en route to a state championship. He didn’t sign then and went to Indiana, where he was used mostly as a multi-inning reliever. He only started once in 34 appearances and has a career 5.86 ERA. The 6-foot-3 right-hander struck out 76 batters in 54 2/3 innings in 2022. Sharp is the second Indiana pitcher the Orioles drafted Tuesday, and like Brehmer, he closed the season strong, allowing just two earned runs in his final 10 appearances.

Other picks of note

>> In addition to Calvert Hall catcher Lamar King Jr. going to the San Diego Padres in the fourth round Monday, a handful of players with local ties had their names called. Maryland left-hander Ryan Ramsey, who threw the 20th nine-inning perfect game in Division I history for the Terps in April, went to the Kansas City Royals in the 13th round, while teammates Troy Schreffler (15th round by the Philadelphia Phillies) and Chris “Bubba” Alleyne (19th round by the Los Angeles Dodgers) were also drafted. Archbishop Curley product Tyler Locker, a third baseman at Virgina Commonwealth, was the Seattle Mariners’ second-round pick Sunday.