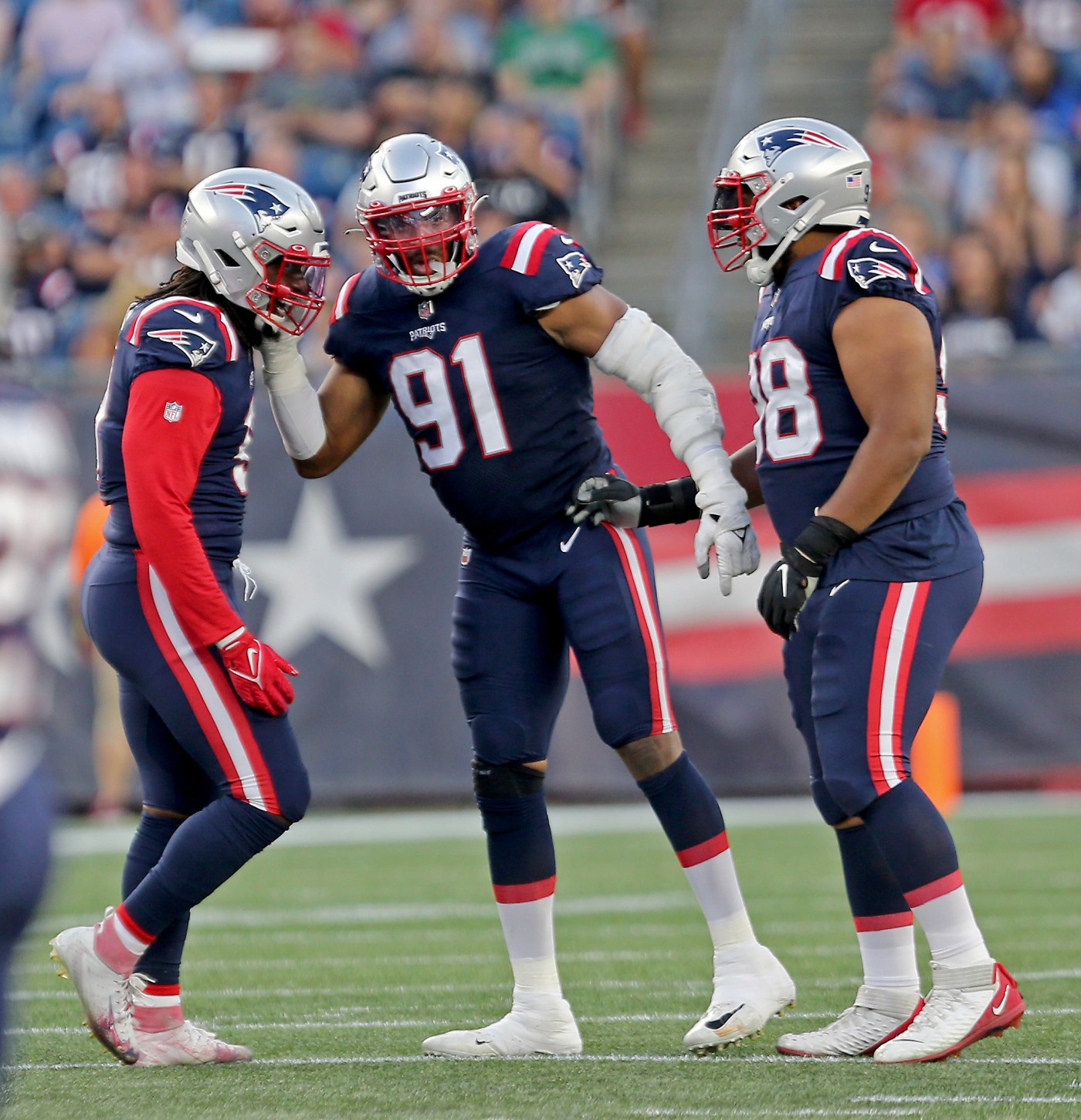 The Patriots are in the home stretch when it comes to determining the final roster ahead of their Sept. 11 season opener in Miami.

Players on the bubble – and quite a few have emerged following Friday night’s preseason win over the Panthers – have joint practices with Las Vegas and one last game to impress and secure a spot.

On Saturday, Belichick said arriving at the 53 was tough, but simple at the same time: “(Just) put together the best team that you can.”

With that in mind, here’s our second crack at the 53-man roster.

Analysis: Jones’ performance in his first preseason game against the Panthers was a microcosm of how it’s been for the offense as a whole during training camp. Basically two parts horror show, one part hope. Perhaps it’s a good sign that Jones rallied from the horror show and put together a nice scoring drive, highlighted by his 45-yard bomb to Nelson Agholor.

The Pats will keep Hoyer as the primary backup, along with rookie fourth-round pick Bailey Zappe, who has done nothing to dispel the notion he’ll eventually be the No. 2 behind Jones.

Analysis: Harris and Stevenson are the primary backs. Montgomery, who’s listed as a wide receiver, looks like he’ll have his share of third-down back duty. As the possible heir to James White, he has filled the role nicely. The tough decisions come after this trio.

Neither of the rookie backs, Strong or Kevin Harris, has shown much. For now, Strong, a third-round pick, sticks. He might later be a victim of the Foxboro flu. Taylor, who can fill a number of roles, has performed better than both, but draws the short straw for now. Kevin Harris also doesn’t make it. Maybe he’ll turn up on the practice squad.

Analysis: Agholor, Meyers and Parker should work as a good, complementary receiving trio for Jones. While there’s been talk about moving Agholor, it seems moot given how well he’s played, coupled with Thornton’s injury. With the rookie being sidelined for an extended period with a collarbone injury, the Pats will need to put him on the roster first, before putting him on IR in order to allow him the possibility of a return once he’s healed.

Bourne, meanwhile, has been a huge disappointment to this point, but there’s still time for him to pop and get back on track. Wilkerson was having a good camp prior to suffering a head injury in the joint practices. Nixon has been good, too. But neither will crack the top 5. Humphrey, however, looks like he could stick at another position.

Analysis: The Patriots have been using some two tight-end sets and won’t be able to get by with just Henry and Smith for the long haul. Enter Humphrey.

Initially planned on giving the spot to Asiasi, who’s been good at times, but largely inconsistent. Then Belichick opened the door for Humphrey, calling him a “tight-end-ish” player Friday night.

While Humphrey has also flashed at times as a receiver, he has occasionally lined up as an in-line tight end. Even better, he’s shown some special teams ability. On Friday, he made an incredible play, diving over the goal line to get a ball back in play before it hit the ground. That effort even had Matthew Slater shaking his head in amazement. So right now, Humphrey is in. Asiasi, meanwhile, could return once Thornton is put on IR.

As for Dalton Keene, a 2020 third round pick, he was released Sunday by the team. He just couldn’t get on the field for various reasons.

Analysis: Starting out with fewer numbers on the line given the Pats will be able to stash a few players on the practice squad, Ferentz chief among them.

One thing to ponder, has Wynn become expendable given how well Cajuste has played in his absence, not to mention Onwenu, who started at right tackle Friday night? What the Patriots decide to do with Wynn, who is “day-to-day” with an unspecified injury, will ultimately determine the shape of the group.

Also went with undrafted rookie Russey, who backed up Andrews Friday night, and held his own against the Panthers.

Analysis: Nice to see Jennings, a 2020 third-round pick, flash and finally emerge as an edge-setter, likely on early downs, if not more.

Uche has made some plays, but the Patriots need him to be even more impactful.

Judon, the red-sleeved wonder, has quietly had a very good camp. Ditto Wise.

Beyond them, Perkins and Mitchell have come on of late. They were both effective against the Panthers, but it’s important to keep in mind it was against third-stringers. Mitchell has been a regular on the starting special teams units in camp. We’ll see how both fare this week.

Analysis: Thus far, this group has done pretty well both against the run and pass. Barmore continues to be a force on passing downs. Godchaux has also been a bit more consistent plugging the middle, which will be key in terms of stopping the run. Guy and Davis add a veteran presence up front.

Ray, who went undrafted out of Alabama, has earned a spot. He’s been very effective playing on the inside. Roberts, a 7th-round pick this year, is a tough cut.

Analysis: Bentley, McMillan and Wilson are pretty much locks. Bentley and McMillan have been steady in the middle. And in the faster and quicker department, Wilson has flashed speed, making tackles all over the field whenever he’s been inserted.

Tavai is on the bubble. He started alongside Bentley against the Panthers, but also saw time late with the scrubs. He played for Patricia in Detroit, so that might give him an edge.

As for the much-heralded McGrone, he still looks like he’s trying to find his way. The 5th-round pick might be practice squad material at this point.

Analysis: The Patriots have a big four — McCourty, Phillips, Dugger, Peppers. The question is whether they want to add a fifth.

It’s already a position of strength. That won’t stop Belichick from keeping Bledsoe, who has been impressive from the early camps to now. He forced a fumble in Friday’s game, and seems to always be around the football.

The second-year safety out of Missouri didn’t play last year, but has shown enough to make the team.

Analysis: Mills has been a consistent standout and has earned top corner status. As for his partner on the opposite boundary, it now looks like Jonathan Jones will be his sidekick, moving from his usual spot in the slot. Jones might have a tougher time against bigger receivers, but he held his own against the Panthers.

Bryant and rookie Marcus Jones have been alternating at nickel corner. Rookie Jack Jones has backed up on the boundary, and has impressed. He has good wheels and great anticipation. Both rookies are in.

The last spot comes down to Mitchell and Wade. Right now, Wade gets the spot given his versatility to play both outside and inside. Plus, he’s come on like a freight train the past week. Mitchell, who was originally opposite Mills before Jonathan Jones was moved, is the tough cut.

Analysis: The usual suspects – Nick Folk, Jake Bailey, Joe Cardona – will once again be the kicker, punter, long-snapper trio. Vizcaino has a strong leg, and has kicked well, but Folk’s the man. It’s possible the Pats will try to keep Vizcaino around on the practice squad to add depth.

They might also try to gain a roster spot by cutting Folk and putting him on the practice squad to start, a maneuver they’ve done in the past.

Beyond that , Slater, Bethel and Davis retain their roles as core special-teamers, while undrafted Schooler joins the club, essentially taking the place of Brandon King.