Patriots are in win-win situation with Bailey Zappe 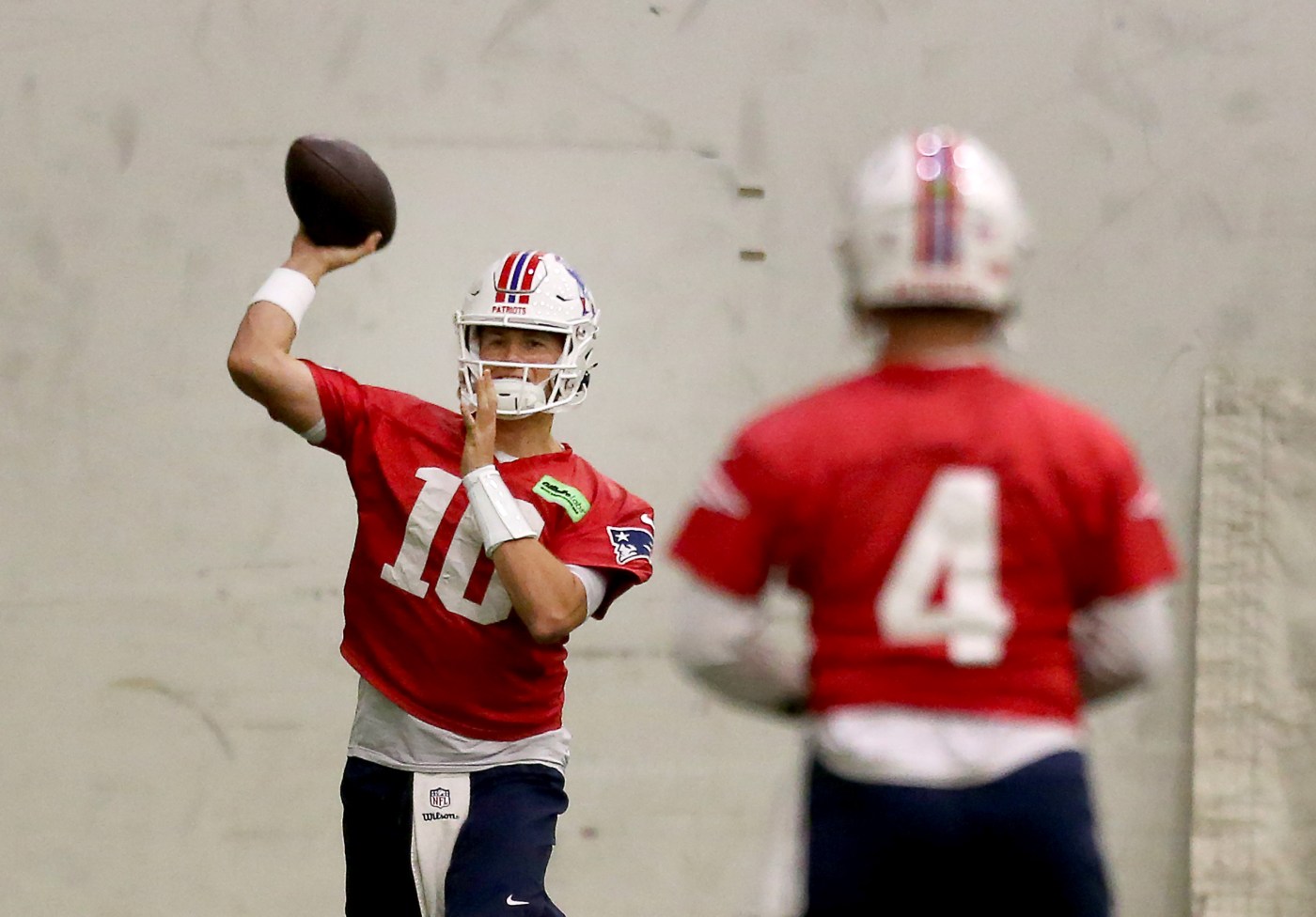 FOXBORO — There’s nothing that lights up a fan base like a good old-fashioned quarterback controversy.

And right now, Mac Jones vs. Bailey Zappe has certainly piqued a ton of interest, but it should be considered in the friendly debate stage, as opposed to a full-blown controversy.

It’s purely hypothetical, since Jones still hasn’t been deemed healthy enough to play and get back under center from the high ankle sprain he suffered Week 3.

But he’s closing in, and could return for Monday night’s tilt with the Chicago Bears. So naturally, there’s a ton of curiosity as to how it will play out.

Will Jones automatically start if he’s cleared to play? Or will the Patriots stay with Zappe and ride the hot hand?

Ultimately, that’s Bill Belichick’s call. And the feeling here is he’ll give the ball to Jones if and when he’s ready.

But no matter which way it unfolds, it’s a win-win situation for the Patriots in the present, not to mention going forward.

Zappe has already proven to be one of the team’s most impactful and pivotal players six games into the season. He’s helped the Patriots navigate through part of the must-win portion of the schedule.

Without Jones, and backup Brian Hoyer (concussion), the Patriots have gotten back to .500 after a 1-3 start with back-to-back wins thanks in part to Zappe coming to the rescue.

You might even call him the MVP at the quarter pole given how he’s kept the team afloat. And looking ahead, the Patriots still stand to benefit given the two scenarios on the horizon.

Jones returns as the starter, and the former first-round pick takes the offense to the next level, bringing them closer to legitimately competing against Buffalo.

Let’s just say if Jones improves to where he might actually make the desired Year 2 leap, and the coaches put him in a better position to succeed than they had earlier in the year, it will have been prompted by Zappe and what he’s accomplished over the course of the last three games.

Jones hasn’t had his head in the sand. He’s watched how well the offense has operated with mistake-free Zappe at the helm. That has to have made an impact.

So between the motivation the third-string quarterback has provided pushing for Mac’s job — triggering the Zappe Fever phenomenon in the process — it’s hard to believe that won’t inspire a better performance from Jones.

At least, that would be the hope.

Should Zappe’s presence/threat light a fire under Jones, that would be optimal especially if Jones cleans up the mistakes, buys in with the coaches after watching his understudy’s success, and plays to the level of his talent.

That would be the best-case scenario. Let’s remember, it wasn’t all that long ago where Jimmy Garoppolo’s presence pushed Tom Brady to three more championships in the decade following the first three Super Bowl wins.

But there’s more. The fact Zappe was thrust into action when both Jones and Hoyer went down also forced play-caller Matt Patricia to basically go with a safer, more efficient version of the offense.

Since Zappe entered the picture, Patricia has utilized more play-action and screen passes, which were a big part of Jones’ success last year. They’ve also pretty much scrubbed the outside zone runs in favor of the power gap runs that have been a staple of the offense.

While the Patriots remain a game-plan offense, play-action passing and screens should still be a part of the equation if Jones re-enters. Ditto power runs.

Who knows, it might work even better for Jones, and keep the Patriots rolling toward a playoff berth.

Belichick sticks with the kid, and the magic carpet ride continues. Zappe would just keep the ball rolling, and build on all the positive energy and confidence that’s been garnered the past three weeks.

With Zappe at the helm, the Patriots would just keep knocking off the teams they’re supposed to knock off, and perhaps, have a better chance against Buffalo and Cincinnati down the road.

Bottom line: the Patriots are going to turn out to be better in the long run because of this quarterback drama. Whether Jones is pushed to greater heights, and resets himself as the quarterback of the immediate future, or the kid continues to stun, surprise and make everyone Zappe, it presents an advantageous situation for the Patriots.

At the very least, they’ve discovered a terrific backup who can take over in a pinch, and deliver wins. That’s an asset not many teams have.

Of course, the Jones/Zappe dynamic could also turn sideways.

Jones might continue to regress should he be given the reins once again especially if Patricia goes back to pushing for change. Or, Zappe might finally turn into a pumpkin against better competition if he remains the starter.

But let’s not go there. Let’s assume one of the better scenarios plays out in the soft part of the Patriots’ schedule. And we should know soon enough which direction it’s headed.

Belichick, of course, didn’t want to show his hand during his video conference Wednesday. The Patriots didn’t practice, so he was happy to leave the quarterback issue in the land of the unknown.

“We’ll see how it goes. I don’t know,” said Belichick when asked about Jones’ status, later adding: “There really isn’t a conversation to be had here. Hypotheticals and all that, I’m going to stay away from those. We’ll see what we are actually dealing with here as we go forward.”

What they’re dealing with is a win-win situation, triggered by the improbable rise of Zappe. That’s the best way to look at it.