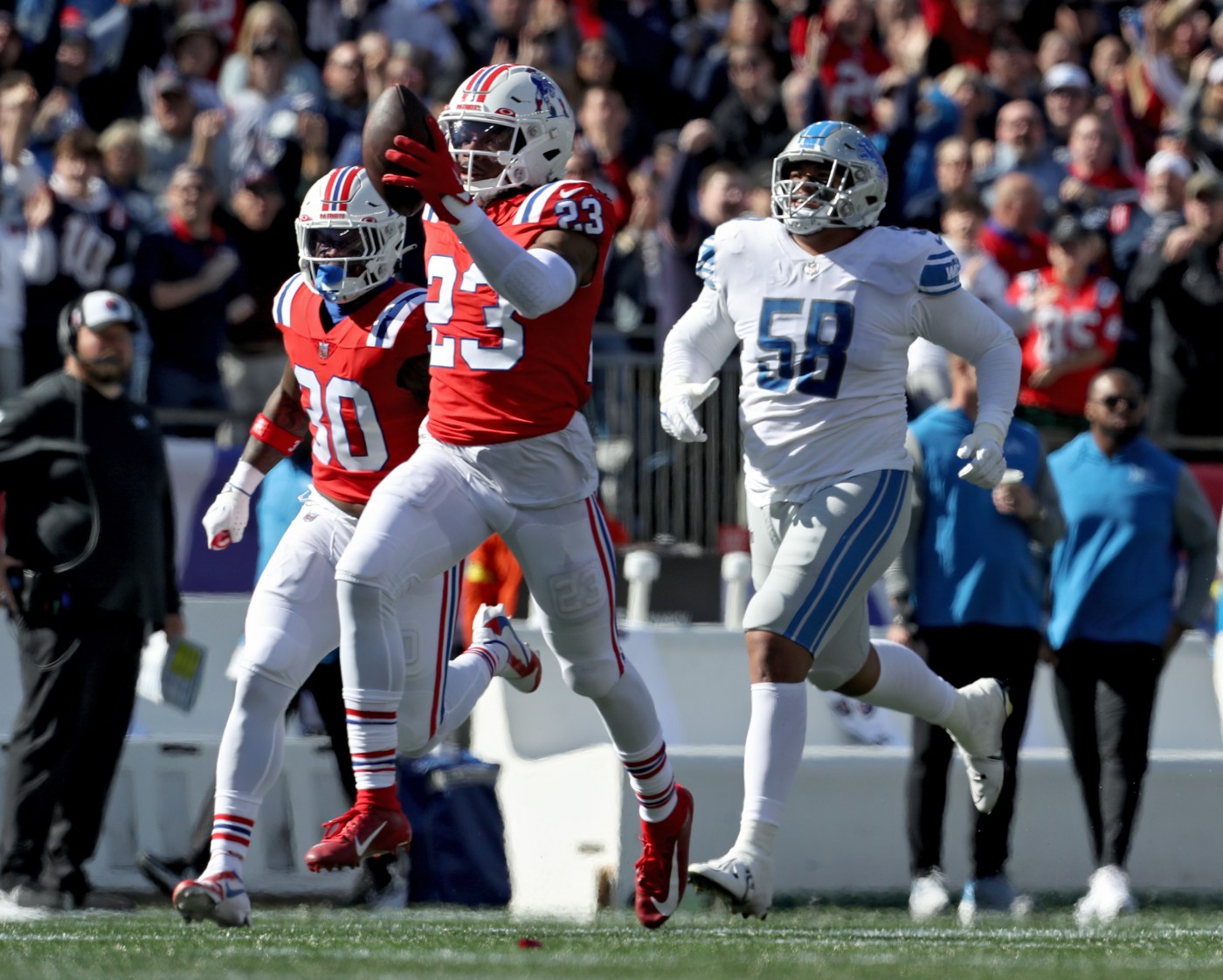 FOXBORO — The NFL’s highest-scoring offense soared into Foxboro like many before it Sunday.

Chest out, confident and capable of steamrolling opponents via run or pass.

Four quarters later, the Lions left Gillette Stadium like most of their top-ranked predecessors: broken by a Bill Belichick defense.

The Patriots put Detroit in a 29-0 chokehold Sunday, the team’s first win in three weeks. Matt Judon tallied two sacks and triggered a scoop-and-score fumble in the second quarter to initially help the Pats pull away. Backup rookie quarterback Bailey Zappe held up his end of the bargain, going 17-of-21 for 188 yards, one touchdown and an interception in a spot start.

The Patriots (2-3) supported Zappe by pounding away at the NFL’s softest run defense through Rhamondre Stevenson, who piled up a career-high 161 rushing yards. Stevenson crossed the 100-yard mark moments before Zappe delivered his only touchdown pass, a 24-yarder to Jakobi Meyers late in the third quarter. The Pats finished with 176 rushing yards, despite losing Damien Harris to a hamstring injury.

Defensively, the Patriots became the first defense in NFL history to shut out an opponent with six or more fourth-down attempts. Detroit finished 0-of-6. Judon’s pressure set the table for a two-turnover performance, excluding the six Lions drives that failed on fourth down.

Kyle Dugger raced Judon’s strip sack 59 yards back for a touchdown, the defense’s second score in as many weeks. Rookie cornerback Jack Jones, who had a pick-six last week, snatched an interception in the first quarter. Jones’ pick marked the first of a half-dozen Detroit trips into Patriots territory that went scoreless.

The Pats defense set an immediate tone by stuffing Lions running back Jamaal Williams on fourth-and-inches to halt the game’s opening drive at midfield. Two plays later, Zappe found tight end Hunter Henry striding all alone up the left seam for his first completion and a 23-yard gain. But inside the red zone, Henry failed to separate for a third-down target and the resulting incompletion ushered Nick Folk on for a 37-yard field goal.

After Jack Jones killed the Lions’ next series, Folk booted another field goal for a 6-0 lead early in the second quarter. Stevenson accounted for 49 of the drive’s 89 yards on a single run up the middle that broke several tackles, a sign of rushing success to come. But before the offense knocked Detroit out, it hit a speed bump.

On second-and-long near midfield, Zappe ripped a slant throw for butter-fingered Nelson Agholor, who knocked the ball into the air just long enough for Lions safety DeShon Elliott to secure a diving interception. Elliott’s pick proved to be fool’s gold, however. Because instead of springing Detroit toward its first scoring drive of the game, the Pats sprung a trap at their 45-yard line.

With under four minutes left until halftime, Goff took a fourth-down snap inside a pocket that crumbled almost as soon as it had formed. Judon reached Goff first for a strip sack off the right edge, and the ball bounced left into Dugger’s arms. Moments later, Dugger extended the ball high over his head with his right arm, crossed the goal line and Gillette Stadium shook with a two-possession lead.

The Lions offense sputtered again over a three-and-out, allowing Folk to kick a 44-yard field goal for a 16-0 lead as the half expired.

The third quarter produced more of the same, with Folk nailing a 37-yarder on the Pats’ opening possession and the Lions answering with another turnover on downs. On the next series, Henry clung to a tough third-down catch and moved the chains, and five plays later, Zappe spotted a hole in Detroit’s zone coverage and zipped his touchdown to Meyers down the right sideline.

The entire Patriots sideline came to greet their rookie quarterback with a contagious joy typically reserved for a winning locker room. Because while 16-plus minutes remained on the clock, they knew what awaited them at Sunday’s end: sweet, sweet victory.

Here were the best and worst Patriot performances from Sunday:

WR Jakobi Meyers He led the team in catches (7) and receiving yards (111). No other Patriots wideout had more than two catches or seven yards.

K Nick Folk The veteran went 5-of-5 on field goals and extended his NFL record of most consecutive makes inside of 50 yards to 64 straight.

QB Bailey Zappe Considering the interception wasn’t his fault, the rookie was near flawless.

WR Nelson Agholor He sent his only target into Detroit hands and left early with a hamstring injury.

WR Kendrick Bourne He took two pre-snap penalties in the first half alone and finished with a single catch for one yard.