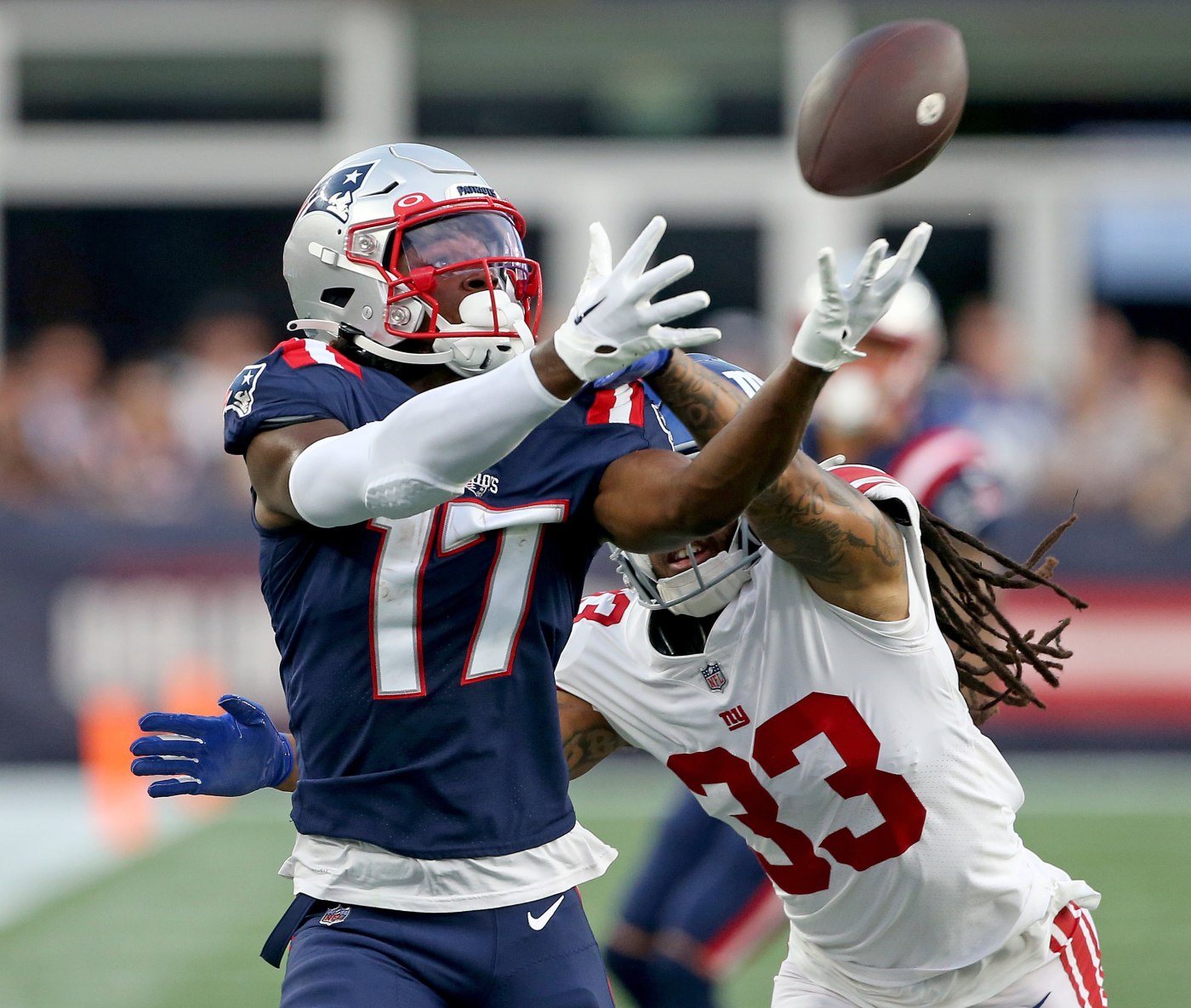 The Patriots kicked off their preseason with a 23-21 loss to the Giants on Thursday night, a game devoid starting-caliber play but filled with late drama. All of the Pats’ projected starters sat, including quarterback Mac Jones, as the coaching staff opted to run out rookies and backups. In Jones’ absence, Brian Hoyer got the start under center before ceding the final three quarters to fourth-round rookie Bailey Zappe.

Zappe went 19-of-32 for 205 yards and an interception in his preseason debut, plus a go-ahead, 20-yard touchdown pass to Lil’Jordan Humphrey at 4:56 remaining. Zappe beat an all-out Giants blitz by lofting a ball down the right seam where only Humphrey could grab it. Running step for step with his defender, the former Saints wideout spun back toward the right sideline, snatched the ball and tumbled for a score.

New York answered with a clock-killing 11-play march that ended with a 24-yard Graham Gano field goal as time expired.

Hoyer finished 5-of-8 for 59 yards and a touchdown that capped his second and final series. Hoyer hit speedy rookie wideout Tyquan Thornton in the end zone with a 2-yard pass on the last snap of the first quarter. The Patriots led 7-3 through the final minutes of the second quarter, when backup corner Joejuan Williams surrendered a 7-yard touchdown pass to Giants receiver Richie James.

New York kept its lead through halftime, when Zappe emerged as a different quarterback.

After going 3-of-9 in the first half, he completed his next five passes and orchestrated an 8-play, 89-yard touchdown drive highlighted by a long connection with backup receiver Tre Nixon. A seventh-round pick in 2021, Nixon finished with 81 receiving yards, second only to practice-squad alum Kristian Wilkerson (8 catches, 99 yards).

Humphrey made six receptions for 62 yards, all in the second half. Around those catches, Giants running back Antonio Williams scored a 2-yard rushing touchdown in the third quarter and Gano nailed a 40-yard field goal to forge a 20-14 lead.

Up front, the Pats struggled to create room in the running game (2.9 yards per carry) and briefly lost offensive tackles Justin Herron and Yodny Cajuste to injuries. Newly converted offensive guard Bill Murray also limped off in the fourth quarter.

As the game wore on, Bill Belichick’s remade offensive staff cycled through play-callers and responsibilities on the sideline.

Offensive assistants Matt Patricia and Joe Judge split play-calling duties, with Patricia directing the first two series and Judge calling the remainder of the game. Patricia, Judge and Bill Belichick all visited with Hoyer and Zappe at various times. After he finished calling plays, Patricia huddled with the offensive line, while Judge coached quarterbacks and wide receivers.

Here were the best and worst Patriot performances from Thursday:

CB Terrance Mitchell The veteran journeyman played most of the first half and punched the ball out from Giants receiver Collin Johnson for a forced fumble. He also tallied four tackles.

OT Justin Herron The third-year lineman got flagged for two false starts and limped off with an apparent injury. Rough night.

CB Joejuan Williams Williams got spun like a top and allowed an easy touchdown to Richie James late in the first half.