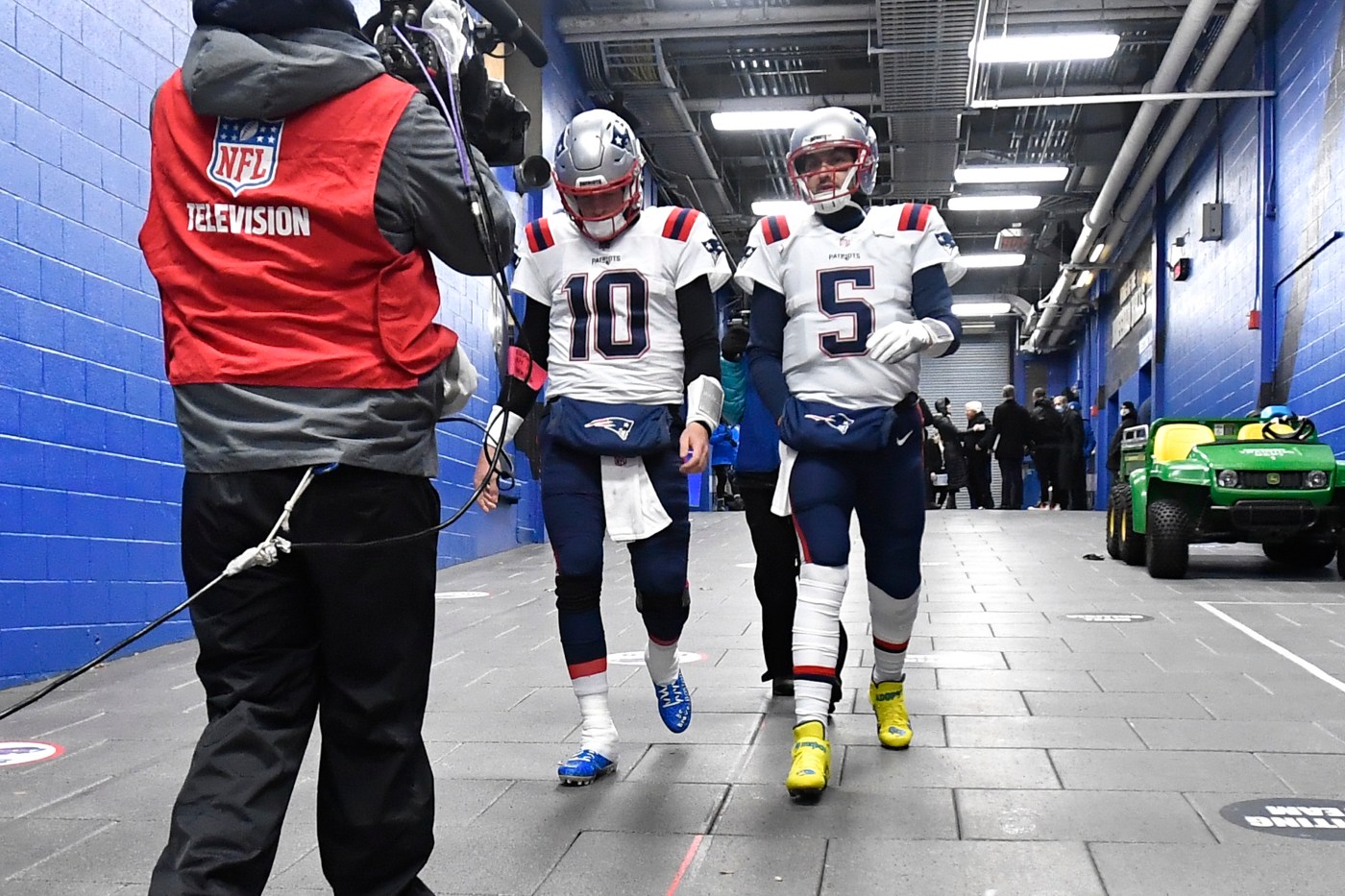 The battle for roster spots is about to kick off in earnest for the Patriots with training camp practices set to start Wednesday.

Even though the Patriots didn’t make a huge splash in free agency this time around, there are still plenty of new faces in the mix fighting for jobs between 2022 draft picks, players acquired in trades as well as the few of note that landed in free agency.

Some of the best battles should come in the areas of third-down specialist with James White on the active-PUP list, boundary corner, and outside linebacker opposite Matthew Judon.

With that in mind, here’s our first crack at a 53-man roster projection. We’ll see how much it changes throughout the course of training camp and the preseason.

Analysis: It makes sense to keep the up-and-coming star (Jones), his much-needed mentor (Hoyer), and future backup (Zappe) in the building. The Patriots typically like to keep just two QBs on the 53-man roster, and it wouldn’t be surprising to see them play hocus-pocus with Hoyer once again, cutting him, signing him to the practice squad, and eventually bringing him back up as they did last season.

But the bottom line here is more about Hoyer’s value to Jones, as opposed to his role as a backup. With Josh McDaniels, the second-year quarterback’s first NFL position coach and play-caller now in Las Vegas, Hoyer remains a vital sounding board for Jones.

Needless to say, a lot is riding on Jones improving in his second year, and he’s done a lot on his own to make that happen between eating better, trimming fat, and working all offseason with his receivers. As for Zappe, the 2022 fourth-round pick will be, if anything, interesting to watch.

Analysis: This is one of the primary positions of strength for the Patriots. Stevenson and Damien Harris are a terrific one-two punch. While Harris is the lead back, look for Stevenson to be even more impactful in Year 2, especially catching the ball out of the backfield.

With White on the active-PUP list, rookie Strong and Taylor will essentially be vying for the third-down back spot at the outset. Given Strong is coming off shoulder surgery on both arms, don’t toss Taylor just yet. Both Strong and Taylor are going to have to contribute as kick returners to improve their chances. With White’s future uncertain, that might leave an opening for rookie Kevin Harris at the outset, but he’s also a practice squad possibility.

It also appears the Patriots are ditching the fullback position, at least in name. They could have any of the tight ends perform an H-back type role from the backfield if necessary.

Analysis: Seven is a somewhat robust total for this group. Not ready to chisel from that number mostly because Nixon showed so well during the early camps, and appears to have a blossoming chemistry with Jones. Rookie Thornton might have a redshirt year, but again, not willing to have him come up with some unforeseen malady just yet. Need to see more from the spindly second-round rookie who possesses warp speed.

On the whole, the receiver position isn’t great. More like sneaky good. Look for Bourne to take on a bigger role in a reshaped offense. Another key is Parker being able to stay healthy. Agholor should improve with another year, while Meyers is and will continue to be a reliable outlet for Jones.

Slater is listed as a receiver, but the 10-time Pro Bowler will once again be a core special-teamer.

Analysis: The Patriots will likely carry three tight ends when all is said and done. But until Asiasi or Keene actually show something, they don’t make the list.

Asiasi was a healthy scratch all last season. Keene, meanwhile, has been plagued by injuries and also hasn’t seen the field much. This appears to be make-or-break time for both 2020 third-round picks, although one or them could wind up on the practice squad, assuming they clear waivers.

As for Henry and Smith, given all the cash the Patriots spent on them in free agency last year, they were brought in to be stars. Henry was the closest to it, as he became Jones’ favorite red zone target. He led the team in TD catches and figures to have an even better season this year.

Smith? He did little to inspire last year. But with a new season, a streamlined offense making it easier, and more time spent in the early camps, the Patriots are counting on him to get it together and be the type of player they were banking on.

Analysis: Health should be the key to success or failure for the line. If tackles Brown and Wynn can stay healthy, and not miss gobs of time, which has been their history, the unit should be fine.

Rookie Strange, who figures to step in right away, and third-year lineman Michael Onwenu will hold down the starting guard spots, with Andrews sandwiched between, once he’s activated from the PUP list.

Of note when it comes to the line, the Patriots are switching to a predominantly zone running scheme, a staple of the Kyle Shanahan offense. It also should work well with the personnel they have.

Herron is the likely swing tackle, although Cajuste also saw time with the starters during minicamp. Given the injury history of Brown and Wynn, both will likely be kept.

Russey, meanwhile, looks like he has a decent shot to make the team as an undrafted free agent. His versatility to play both at guard and center, where the Pats are lacking depth, would be helpful.

Ferentz, meanwhile, gets to hold a spot until Andrews returns. He’s a candidate for the practice squad, a place he’s often resided while in Foxboro.

Analysis: Basically, it’s Judon, Wise, and hope someone steps up to help rush the passer in sub packages.

Judon (12.5 sacks) was a beast in his first Patriots season until he disappeared down the stretch. Belichick is naturally hoping Judon, who he gave the highest contract ever for a defensive player, will be a force throughout the year.

Wise can play outside or inside, but is typically out on the edge on early downs.

The key will be having Uche finally emerge as a consistent pass-rusher and not just show up in flashes. And if not Uche, perhaps Perkins can seize the day. Either way, both should make the roster.

Don’t have much confidence that Jennings sticks. He’s been another invisible man, mostly due to injuries. Purdue’s Mitchell, an undrafted free agent, is likely headed for the practice squad.

Barmore racked up 48 quarterback pressures as a rookie, and PFF believes he’s on his way to stardom. That would certainly help the cause.

“If Barmore improves, he’ll be a problem that offenses have to game plan around very shortly,” wrote PFF’s Mike Penner.

No other tackle up front has any hope of warranting that kind of attention, although Guy has been a good, dependable player in the trenches over the years.

The Pats need to get more out of Godchaux in the middle. His level of performance didn’t quite match up with the $9 million he was guaranteed over two seasons.

Sixth-round pick Roberts could stick around on the practice squad. Ditto Ray, who played at Alabama and was roommates with Barmore.

Analysis: It doesn’t appear the Patriots will utilize more than two inside linebackers on the field at any given time. Bentley is the leader of the group, then there’s the much-hyped, much ballyhooed McGrone, who has yet to play a snap.

The Patriots have made no secret they’re banking on the former Michigan linebacker, who basically had a redshirt year last year coming back from ACL surgery, to help the position evolve.

With aging veterans Dont’a Hightower and Jamie Collins let go, the Pats have moved more toward youth and speed with Wilson, who arrived via trade, and McGrone, a 5th-round pick in 2021.

McGrone is more the prototype of the modern NFL linebacker at 6-foot-1, 236 pounds. He’s got the speed to defend pass-catchers, and just enough muscle to help stop running games.

McMillan had been placed on the active-PUP list, but was activated Monday.

Analysis: Along with running back, the safety group, with McCourty, Dugger, Phillips and Peppers, stands as the strongest and best positional collective on the roster.

McCourty is the lone free safety, with Dugger, Phillips and Peppers more in the strong safety mold.

In any case, this unit will be relied on to do a lot, and basically, move around the defense to try and thwart opposing offenses. Don’t be surprised if Belichick uses them to blitz more often than in the past.

With Peppers temporarily on the shelf on the PUP list, that allows for second-year safety Bledsoe to make a case. As for Schooler, the undrafted free agent and core special-teamer sticks for now.

The practice squad is a possibility for one or both if need be.

Analysis: With J.C. Jackson signing with the Chargers, the Patriots sure could have used a top corner. Not sure they have one. Butler’s return is both interesting and amusing, but at age 32, having spent most of last season in retirement, it’s hard to tell before camp exactly what the Patriots are going to get. He’s certainly not a long-term fix.

When Jon Jones comes off the PUP list, he’ll help the cause as a slot corner, while Mills should start out on the boundary.

Will Butler be the other perimeter corner? That’s likely, but hard to say for sure at this stage.

Rookies Jack Jones and Marcus Jones provide a bit of hope both outside and inside. Jack Jones looked so good in minicamp, he sparked conversations that he could land one of the starting jobs on the outside. We’ll see how he performs in training camp.

Marcus Jones, meanwhile, oozes speed and ability, even at 5-foot-8, 175 pounds. He’ll get on the field in some capacity, be it defense, offense, or special teams.

Mitchell provides some veteran depth. The Pats seem to like what he brings to the table. Bryant adds depth in the slot, while Wade and disappointing 2019 second-round pick Williams are out.

Analysis: Folk and Cardona are locks, and Bailey should also fall into that category.

Folk was one of the best kickers in football last season while Cardona, who no longer has any competition, has been a mainstay at long snapper.

Vizcaino is another kicker in camp, but he’s likely around to lesson the load on the 37-year-old Folk.

Bailey, on the other hand, will have to continue launching bombs to beat out Julien. The former All-Pro punter had a down year by his standards in 2021, and is looking to recapture his form. Bailey got off to a good start in minicamp and should keep his job.