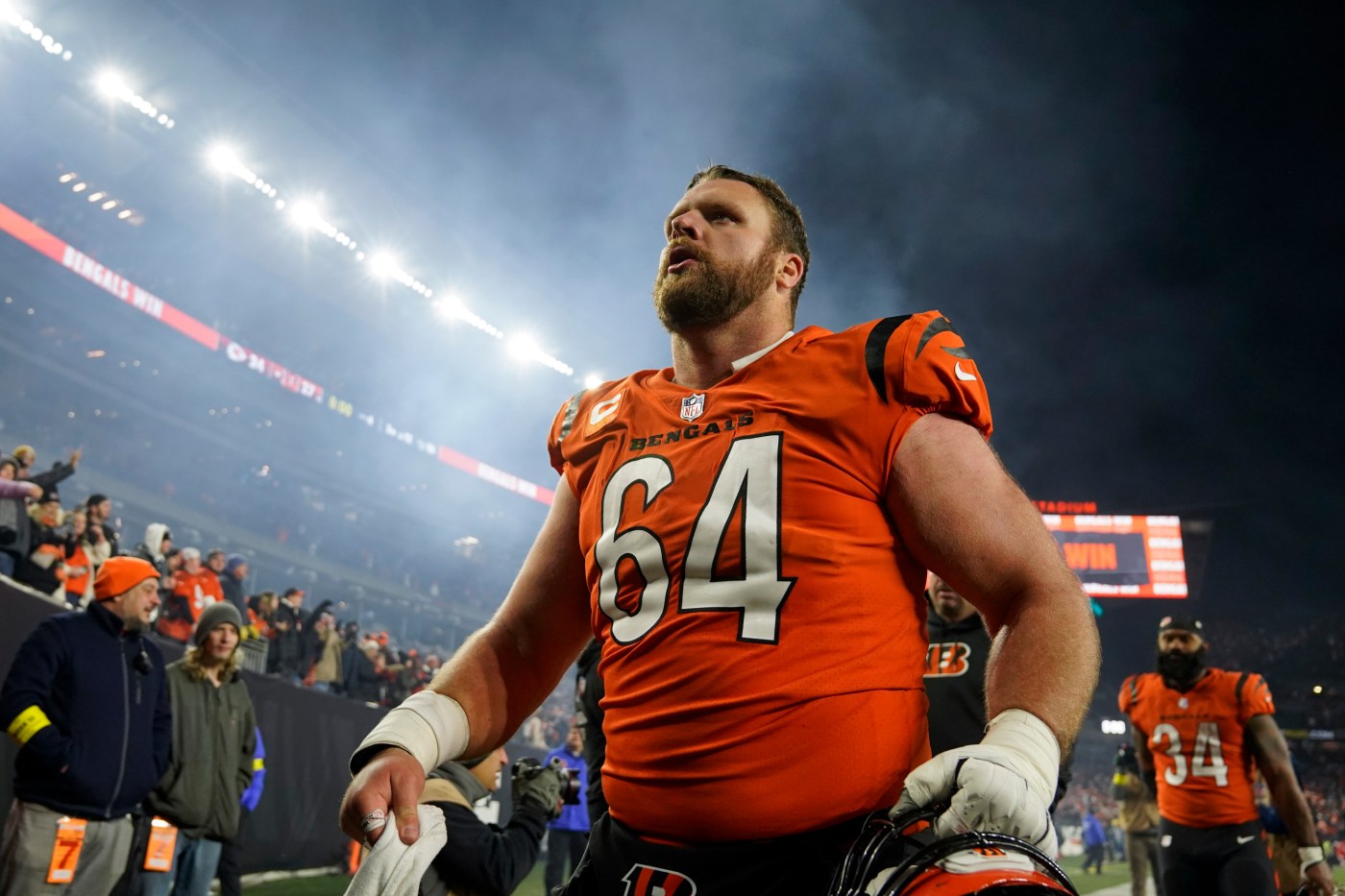 FOXBORO — Every football team and every locker room needs a player like Ted Karras.

He’s a great leader, has the infectious personality that boosts team morale, does yeoman work in the trenches, and is a star in the community.

The Patriots had him for two successful tours of duty. His versatility as an offensive lineman was a godsend last year. Once he was inserted as the starter at left guard, the line’s fortunes changed.

The Patriots, however, decided Karras was expendable. They played games with him in free agency, lowering their initial offer, so Karras headed to Cincinnati.

And how did that turn out?

Speaking with him Tuesday night, he’s not complaining or tossing stones at the Patriots for how it turned out.

He signed a three-year, $18 million contract, is playing for a Super Bowl contender, snaps the football to Joe Burrow every day and is already a beloved teammate and captain.

One Bengals employee even refers to him as “the mayor of Cincinnati.”

Compared to all the dysfunction with the Patriots offense, Karras has it made. He’s not questioning the coaches, getting chewed out by his quarterback, or taking part in a conservative, unimaginative system.

He’s living the dream as Burrow’s center and wingman. While he’s already won two Super Bowls blocking for Tom Brady during five seasons in New England, he’s in prime position to add on.

“I’m loving it. This has been quite an opportunity in my career,” said Karras. “I’m an hour-45 (minutes) door-to-door to my parents’ house (in Indianapolis). It’s a lot of fun to come in and be the starting center, and I’m very honored my teammates voted me a captain.

“It’s been a tremendous year so far, and it’s obviously crunch time now. We put ourselves in a good position, so it’s been a lot of fun to come into work. This locker room has embraced me … everyone here is really, really cool,” he said, adding: “But I’m really excited to see my old friends, wearing a different color. It’s going to be a very unique Christmas Eve. I’m really excited to come back to Gillette … it’s going to be rocking, I’m sure.”

The Bengals, who occupy first place in the AFC North at 10-4, have won six straight, and continue to improve down the stretch. It’s a formula the Patriots used to have locked down, but in recent years, can’t seem to find their way after Thanksgiving.

The Bengals did start slow, but they’ve really put it together during the past month and change. Part of that has been the result of the offensive line coming together.  During the offseason, the Bengals completely overhauled the line – to try and protect Burrow better – and it just took a little time for the players to gel.

“There were four new guys on the O-line, and the O-line, more than any other position, is a continuity and repetition position,” said Karras. “There were a couple of games that weren’t our best, but now we’re doing what it takes to win ballgames. We have a big challenge ahead of us with (the Patriots) front.”

“Well, I’ve been very spoiled in my career with quarterback play. I have had the opportunity to play with five really good quarterbacks, and Joe is as good as they come. The interesting thing playing with superstar quarterbacks, obviously, they’re a little larger than life,” said Karras.

“When I was in New England, Tom (Brady) was 20 years older than all of us. So it’s an interesting trade-off, Joe is 25. He’s more of a peer. Brady was married with kids. He was Tom Brady. I think Joe will get to that status.”

Is Burrow as cool as he appears?

“He is,” Karras said with a laugh. “He’s cool, and collected. His nickname is Joe Cool, and he lives up to that in every way. He’s the unquestioned leader of this team, and has a rapport with everyone in the building which I think is mandatory from your QB, but not everyone can do it. And he does a great job of it.

“He’s a cultural driver and a guy everyone has a ton of respect and trust in. We want to do our best for Joe, because we know if we do our job, he’s going to make us look good.”

In a short time, Karras has also gained a ton of trust and respect from his Bengals teammates and their fans. He experienced his first “viral moment” while leaving the field in Tennessee after the Bengals beat the Titans earlier in the season.

Karras was fired up because a few liberties were taken with the Bengals in victory formation. As he walked off the field, he threw a round of F-bombs toward the fans in the stands.

Karras’ former line coach Dante Scarnecchia got a kick out of watching him cut it loose, but was largely taken aback given the lineman was usually pretty reserved. Karras said Scar wasn’t alone.

“Heck, it took me aback a little bit,” Karras said with a laugh. “I didn’t realize I was being filmed. It was my only viral moment in my life. Obviously, I was shocked by the positive responses … I really appreciate the feedback I got. The Cincinnati fans are unbelievable.”

Karras, like the rest of the world, saw how the Patriots lost their game against the Raiders Sunday with an ill-advised hook-and-lateral that turned into a Vegas walk-off touchdown.

No matter how crushing that defeat might have been, Karras is still expecting the Patriots A-game on Saturday.

He remains a huge supporter of Mac Jones and believes the Patriots quarterback will ultimately get back on track.

“He’s made of the right stuff that is important to New England, and is important in football. Obviously, he’s had some lessons to be learned this year,” said Karras. “He’s a very, very good quarterback, a great leader and a worker you can never count out. I’m always rooting for him – not this weekend of course – but I had a great relationship with Mac as a rookie.

“He stepped into a huge role for us last year, and was a driving force of the energy we brought. He’s going to be a very top contributor for a long time in this league.”

It’s still hard to believe the Patriots didn’t go the extra mile to retain Karras. They certainly miss his presence on the line. They wouldn’t have had to draft Cole Strange where they did, if Karras was still around.

“I have no hard feelings. Bill (Belichick) has given me two life-changing opportunities. I will always have a lot of admiration and respect for what he does, and the fact he wanted me on his football team,” said Karras. “I understand the business aspect of it. And everything happens for a reason.

“I got a tremendous opportunity to play on a team that’s already had success and fill a position of need. It’s worked out for the best so far, hopefully it will continue to.”