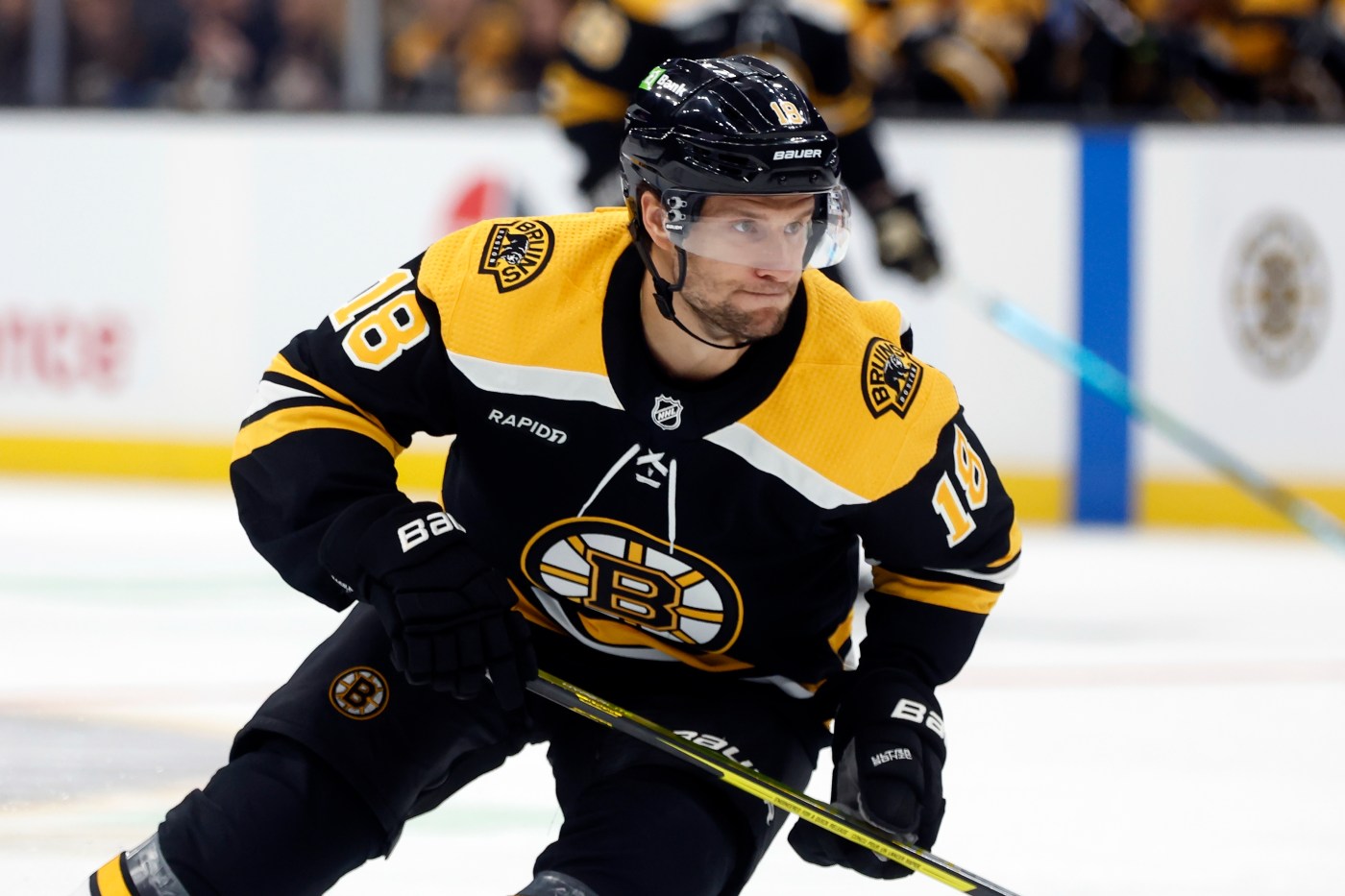 When the Bruins obtained Pavel Zacha, there were a number of options for the big forward that were easy to imagine for most observers.

One of them that didn’t jump off the page — but now seems like a natural idea — is to play him with his Czech countrymen David Krejci and David Pastrnak. Given his history with the returning Krejci, Taylor Hall was expected to ride the left wing shotgun with those two, and he still might. But when Hall went down with injury, Zacha jumped in that spot and the results were tremendous in their first game together on Wednesday in New York with the line exploding for a three-goal second period that changed the game.

While giving the usual ‘you’re-only-as-good-as-your last game’ caveat, coach Jim Montgomery said on Friday that he’s contemplating keeping the line together— even when Hall gets back.

The coach has seen a boost in Zacha’s game since being united with his countrymen.

“They were really good in practice (on Thursday)…and obviously the game they played was really good,” said Montgomery. “He seemed to have a lot of jump. Now, is that jump just because he’s getting better throughout camp and he can do that with anyone? I don’t know. But right now, that chemistry with Krejci and Pasta is really good.”

It was Zacha by himself who got he ball rolling in the 5-4 win over the Rangers, picking off an errant K’Andre Miller pass, turning on the jets and scoring on a breakaway. Then he took advantage of a couple of confused Rangers who were expecting an icing call that never came, pouncing on the loose puck and dishing to Krejci, who set up Pastrnak’s one-timer goal. He also picked up the secondary assist on Krejci’s goal that was set up on a beautiful Pastrnak feed.

“It was great,” said Zacha, who could add a heaviness and another defensive conscience to the line. “I think we were hard on pucks and we created chances when we had them, so it’s always fun to play with guys like that and the skill level that they’re at. And playing with two Czech guys, I haven’t done that ever in the NHL so it was fun to play and I’m happy. We worked hard to get the pucks and if you’re a plus in the game, that’s a big thing. I think it went pretty good.”

He also got a kick out of being able to communicate in his native language on and off the ice with his linemates.

“It was strange for a little bit, but I liked it,” said a chuckling Zacha, whose command of English is excellent.

With an eye on playing on the Patrice Bergeron line while Brad Marchand is out until late November following double hip surgery, Zacha focused in the offseason on working on his shot and becoming a little more trigger happy than he’s been in the past. But even though he’s now playing with one of the best snipers in the league on the other side of the ice, Zacha said that doesn’t change his thought process that much.

“I feel like (Pastrnak) can create a lot of chances, too. He’s a skilled player. He’s not just a goalscorer,” said Zacha. “He can make great plays like he did (on Krejci’s) goal. I think anyone on our line who has a chance to shoot, we’ll be able to score goals. I just think it’s all about being hard on pucks, especially for me on that line. I think being fast and trying to create the stops in the offensive zone so we can get them the puck and make plays, that’s the important thing for me personally. I think everyone on our line can make plays and score goals, so I think there’s a pretty good balance there.”

One would think that Zacha’s time with the Czechs, or even in the top six, may not last when Marchand comes back. Given Marchand’s decade-long resume of excellence with Bergeron, and Hall’s lack of chemistry with Coyle last year, it would make sense that Hall would go with the Czechs and Zacha would drop down to play with Coyle when the forward group is fully healthy, should that day ever come.

That’s fine with Zacha. He doesn’t have a proprietary attitude toward his current slot.

“We have so many good forwards. Whatever line you’re going to be on, you’re going have great players that could be first or second liners on other teams, so it’s exciting for me,” said Zacha. “We have great centermen on this team. I just have to pay attention and focus on playing my best, talk to them and be a good fit on any line I end up on.”