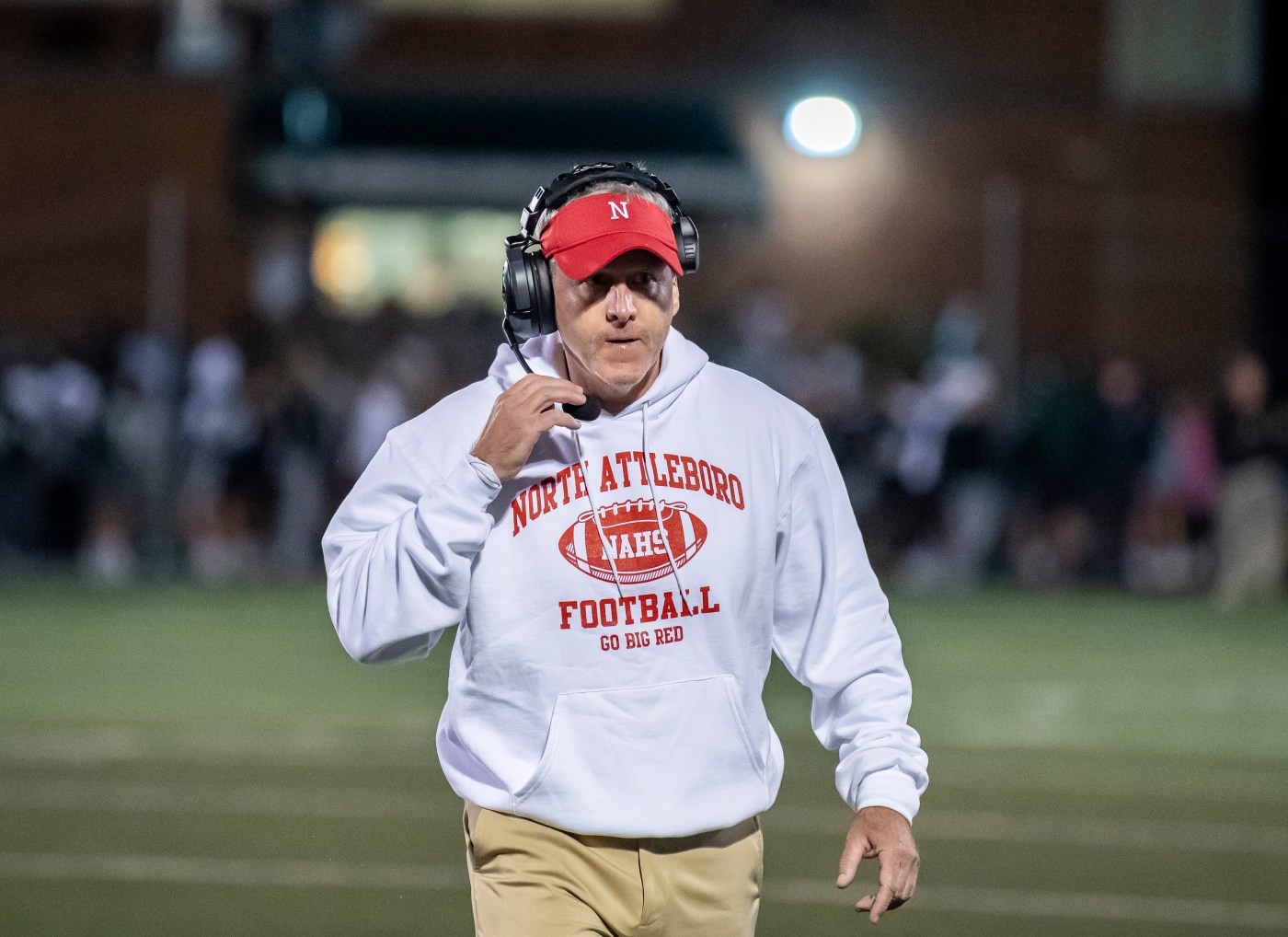 Mark Bettencourt’s phone bill might be exorbitant this month, but it’s an expense the Peabody coach will incur with a smile.

As soon as his team put an end to Marblehead’s state-best 23-winning game streak Friday, Bettencourt’s phone lit up like a string of Christmas tree lights.

“My phone was blowing up with calls all night from past alumni and I know they were smiling. It just meant so much to so many people in Peabody,” Bettencourt said. “Marblehead has knocked us around pretty good the last seven years, so the win (40-7) wasn’t just for this team, but those before us. This group really fought hard, practiced hard for this moment.”

While Marblehead’s winning streak generated some well-deserved press, Peabody entered the contest on a nine-game run of its own. The Tanners dominated their first three opponents, winning by a 115-8 margin, but they were not of the caliber of Marblehead, the defending Div. 3 state champion.

The game started out as if the first team to 50 wins. That was exactly what Bettencourt didn’t want to have happen.

“When I saw 7-7 right away, I was thinking a shootout which I was hoping wouldn’t happen,” Bettencourt said. “But we settled down and my defensive coordinator Justin Powers really had a great game plan. We knew Connor Cronin was a great player so we were going to double him and make them beat us with someone else.”

While the defense settled down and kept Marblehead off the scoreboard the rest of the way, the high-powered Peabody offense went to work. It helps to have an experienced and talented quarterback like Shea Lynch running the show. In the current 10-game winning streak, the Tanners have scored at least 28 points in each of those triumphs.

The good ones rise to the challenge and Lynch was clearly up to the task Friday night. As good as Lynch’s numbers were (21-of-26 for 304 yards and four touchdowns), Bettencourt was more impressed with the intangibles Lynch brought to the table against Marblehead.

“We had a feeling they were going to try and take away the deep threats,” Bettencourt said. “We were prepared for that and we knew if we were patient, take the short passes they were giving us, we could be successful. Shea did a great job in not getting itchy and trying to force the long ball down the field. His leadership in the huddle was amazing, he made sure we were not overwhelmed by anything, basically told the guys just worry about doing their own jobs. We have 5-6 really good receivers and Shea used them well.

“It was a great night for all of us, we’ve waited a long time for this.”

1. Catholic Memorial (3-0) – Not that it matters to the Knights now, but they are the proud owners of the state’s longest current winning streak at 20.

2. St. John’s Prep (3-1) – Much like their Catholic Conference counterparts from West Roxbury, the Eagles put the wood to LaSalle.

3. King Philip (4-0) – Warriors were pushed to the limit by a vastly improved Taunton team before prevailing.

4. Xaverian (3-1) – Hawks had little trouble with Lawrence for the second consecutive year.

7. Central Catholic (2-2) – Raiders did some good things but not enough to slow down Andover.

8. Reading (4-0) – We may have to wait for the postseason to see how truly good the Rockets are.

11. Duxbury (3-0) – After a week off, the Dragons get back in the swing of things against Plymouth North.

12. Methuen (4-0) – Our crack behind the scenes historian Freddie Merchant informed us that Drew and Shane Eason are the sons of former Everett star running back P.J. Eason.

13. Everett (3-1) – Speaking of Everett, the Crimson Tide rolled to their third straight win.

16. North Attleboro (2-1) – Life doesn’t get easier for the Red Rocketeers as they travel to undefeated Milford.