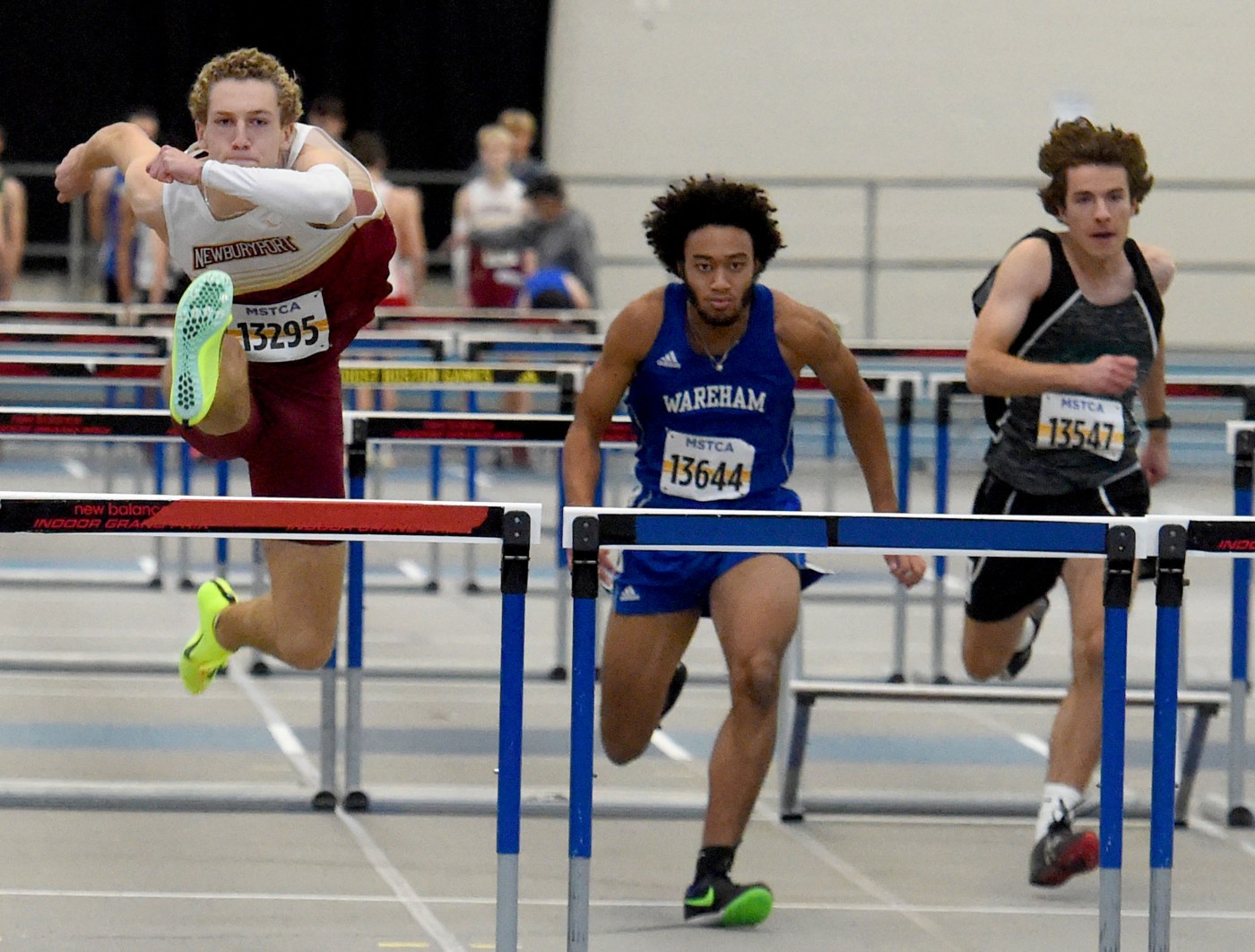 It’s been a long way back for North Reading’s Madison Vant and she showed the field at Sunday’s Coaches Small School Speed Classic that she’ll be someone to contend with as the season wears on.

Vant had to come back slowly from a painful summer stress fracture in her back, a tough injury for an athlete adept in the hurdles, long jump and pentathlon. Vant showed no ill effects on the Reggie Lewis Center runway though as she broke her indoor personal best in the long jump with a technically-sound leap of 17 feet, 1/2 inches. She also had a big day on the infield, grabbing fourth in the 55 hurdles against a strong field in 9.28.

“It’s (long jump) a lot about figuring out your rhythm and your steps to help keep it straight,” said Vant. “I felt good pop hitting the board too.”

Plymouth South junior Cam Travis continued her sizzling start to the season by capturing the 55 hurdles and breaking her own personal best for the second time in 8.62. Thirty minutes later she took fourth in the 300 in 44.20.

Along with her physical workouts, Travis has been watching training and technique videos on social media to help get an edge on the competition. The butterflies were present before the gun but were gone soon after.

“I was really nervous (today),” she said. “I was very prepared but got intimidated by everyone watching. I didn’t want to mess up. I usually do three steps (between hurdles). That’s where I want to be.”

Ean Hynes of Newburyport has been struggling with getting down to three steps in practice, but the Stonehill-bound senior was on point as he bolted away from the 55 hurdle field for an 8.09 win. Sawyer O’Riordan of Nashoba was second in 8.46 and East Bridgewater’s Brennan Shea clinched the bronze medal with his 8.61.

“I couldn’t do that (three steps) four days ago,” said Hynes. “When it comes to competition you just have to trust yourself.”

The boys’ 600 was a beauty as Samuel Secor of Bromfield ran down Lunenburg’s Zach MacLure to capture the 600 in 1:25.46. MacLure was a step back in second with a 1:25.56. Secor expected MacLure to take the lead from the gun, but when he went out conservatively he knew it would come down to a kick.

“I sit back and run even splits,” said Secor. “I was expecting he’d be way out front and I’d have to try to catch him from way behind but that wasn’t the case.”

In the girls’ 300, Marlboro’s Ava VanBuskirk found running in the same lane to her liking as she blazed her way to a quick 41.77 win. Newburyport’s Devin Stroope registered a fast 42.41 for second. “Honestly, I didn’t think I’d like it (running in the same lane) but it was a little less stressful,” said VanBuskirk. “I didn’t have to worry about cutting in. I just had to concentrate on running in my lane.”

Julian Ram-Tylerbest of Medfield got off a leap of 20-10 to capture the long jump and North Reading’s Giuliana Ligor held off Caroline Collins of Nashoba, 1:38.81 to 1:39.33, to win a tight race at the front. North Reading also had a winner in the girls’ 55 as Ava McIntyre leaned at the tape to hold off Pentucket’s Sydney Trout in 7.46. Trout was less than a step back with a 7.49. Littleton’s Tyler Castillo blitzed a solid field in the 55 for a 6.77 win.