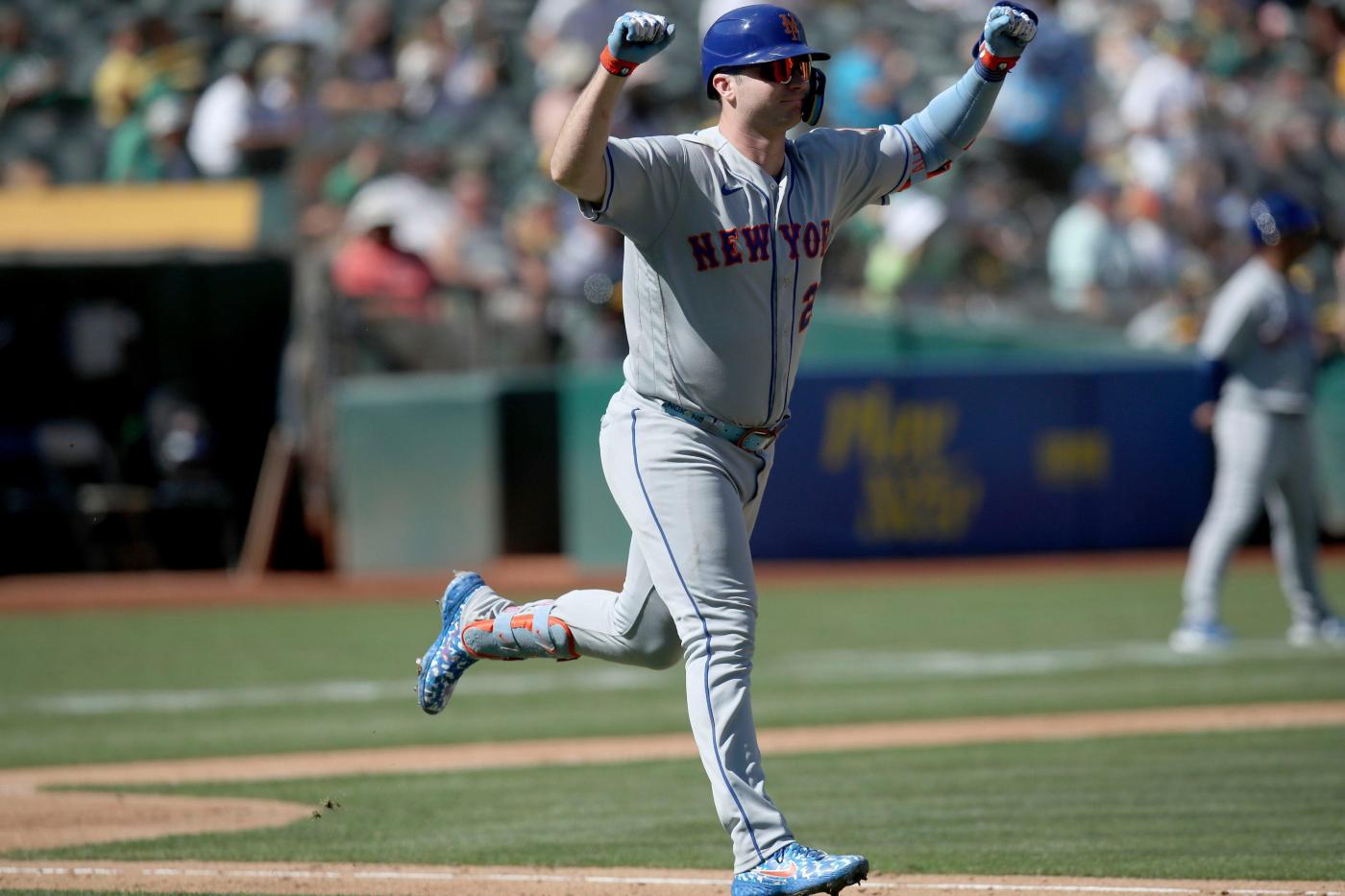 Buck Showalter has long been known for some folksy sayings but he always gets to the point. It’s not just with the media either; the Mets’ manager even leaves the players laughing at times.

“Every time you walk by him, he’s got a story,” reliever Seth Lugo said.

When trying to describe the leadership abilities of Pete Alonso and Francisco Lindor, Showalter needed a few more words to get to his point but he made it — their actions speak louder than their words.

“What’s that expression? Their actions speak so loudly that you can’t hear anyone say anything,” Showalter said Tuesday before the Mets opened a two-game series against the Miami Marlins at Citi Field.

Alonso has been a leader since his rookie season in 2019 with players gravitating toward his gregarious personality and his knack for timely hitting, but it’s the latter that got his name inked in the Mets’ record books over the weekend and earned him a Co-NL Player of the Week award.

The first baseman broke the club’s single-season RBI record with a monster day at the plate Sunday in a win over the Oakland A’s. He went 4-for-4 to drive in five runs and bring his season RBI total to 128, a franchise record. For the week, he hit .333 with nine runs, eight hits, two doubles, four home runs and 13 RBI to share the weekly award with St. Louis Cardinals slugger Albert Pujols.

RBI aren’t exactly a popular statistic these days. It’s a stat that is dependent on other players around him, therefore it isn’t really considered a great indicator of a hitter’s full offensive contribution. But Alonso has always prided himself on being a team-first player so this record is a point of pride for him.

Showalter recognizes that in the two-time All-Star.

“To be able to do that, you have to have the table set. You have to have the pieces to do that. You can tell how he acknowledges that and he’s aware of that,” Showalter said. “But he’s more than just a power hitter, he’s a guy who will take a walk and can run the bases. He wants to be a well-rounded player. It’s happened in the past, but I’m glad everybody gets to see that he’s doing it again.”

Showalter sees the effect Alonso has on opposing pitchers, and while it’s not necessarily something that can always be quantified it’s important nonetheless.

“There’s a lot of anxiety (hitters like Alonso) create in pitchers because they want to twerk their best breaking ball,” Showalter said. “And then they try to do something different, you get it around and they throw it just where they don’t want it to go. They go, ‘Don’t throw it there — I just threw it there.’

“How you stay aggressive sometimes when you’re being pitched so difficult, that’s a challenge for Pete sometimes.”

Don Mattingly played for Showalter with the Yankees from 1992-1995, retiring after the conclusion of Showalter’s last season in the Bronx. It’s clear there is a strong mutual respect between them.

Showalter said he could see Mattingly’s managerial mind as a player and that the game is better with him in it.

“It’s really getting a shot at winning the ring, right?” Mattingly said. “He’s been part of building some teams that have been really, really good. Kind of the year after, they get that ring. When that happens — it’s like I watched Indiana after Bobby Knight left. They were really good the next year and then they fell apart. The next year after he left, still, his influence is there. I think the same thing with Buck from the standpoint of when he left the Yankees, he left it in a really good spot.”

Pinch-running specialist Terrance Gore has a broken molar but will be available to play this week. The Mets are trying to gauge how they could use him in late-inning postseason situations as they start to make decisions about the postseason roster.