Todays Though > News > Phil Jurkovec will play his final season at BC.
News

Phil Jurkovec will play his final season at BC. 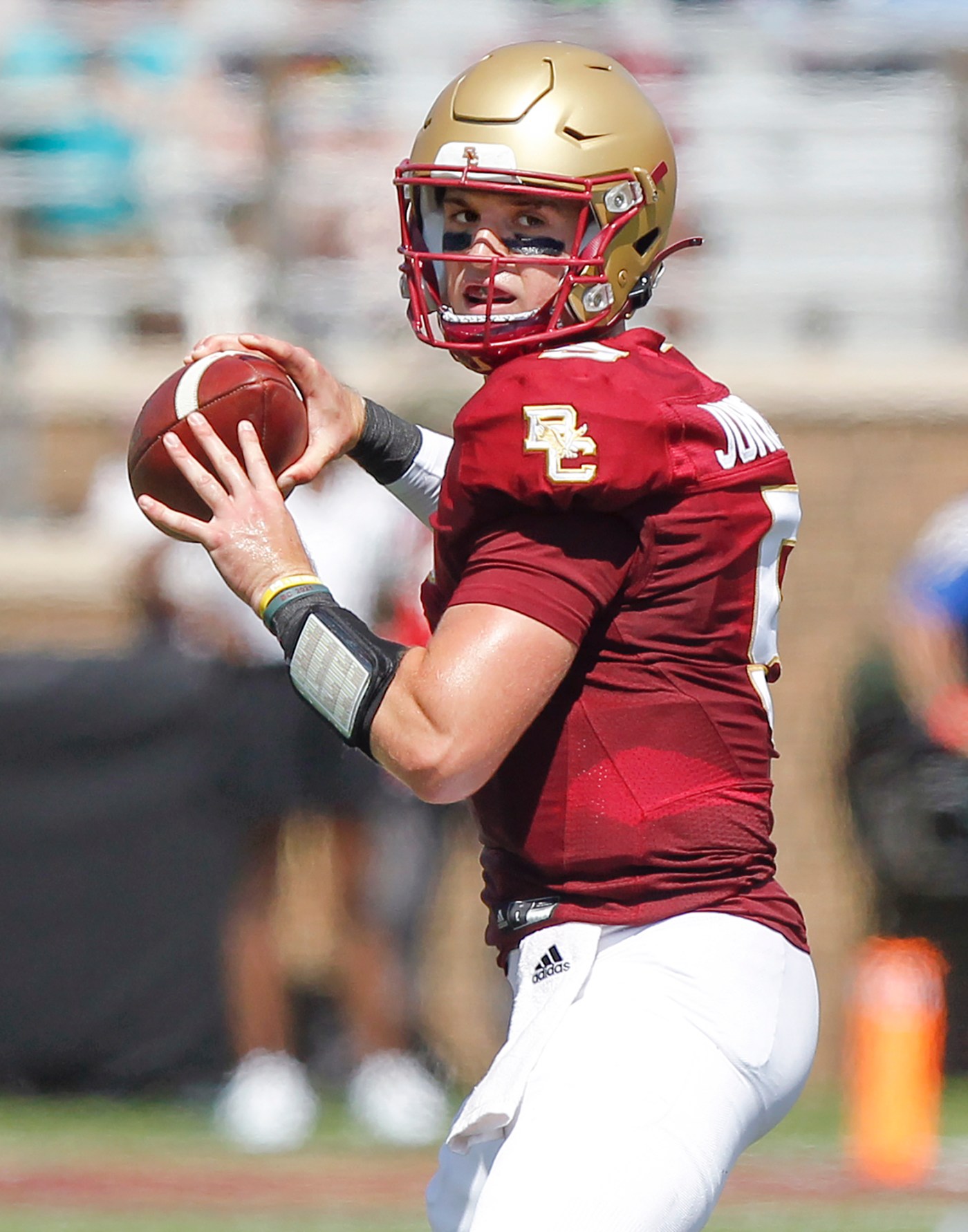 For the second straight summer, Jurkovec served as a counselor to high school athletes while further developing his own skills at the Manning Passing Academy at Nicholls State University in Louisiana.

Jurkovec brought pieces of what he learned on the Bayou from Peyton and Eli Manning back to Chestnut Hill and put them to use during the Eagles’ training camp throughout the dog days of August.

The Notre Dame transfer begins his third and final season at the Heights on Saturday against Rutgers.

“The Mannings were great in the camp and talking to them and seeing how they operate was a very cool experience,” said Jurkovec. “You learn how to deal with people the way the Mannings do with their expertise in football and their football knowledge.

“You try and gain everything you can from them and it was good. Most of it was mental, conversations with the Mannings really, and we did a couple of workouts out there on the field.

“The Mannings were coaching us up on some techniques. They could make all the throws and they know the game so well to be played at the highest level.”

Jurkovec worked alongside and brainstormed with the best returning college quarterbacks from the major conferences. The group included ACC Atlantic Division rivals Sam Hartman of Wake Forest, Clemson’s Hunter Helms, and Devin Leary of North Carolina State. Jurkovec had an opportunity to eye  the competition in his pursuit of the Manning Award, given annually to the nation’s top quarterback.

“I talked to a bunch of guys, but I don’t know if I was close with anybody,” said Jurkovec. “I got to bounce around and talk to a lot of guys from across the country.

“It was kind of like a conference. You get all the quarterbacks from across the country together and we just bounced ideas off each other.”

The Eagles offense underwent some substantial turnover in the offseason, after going 6-6 overall, 2-6 in the ACC in 2021. BC was denied participation in the Military Bowl against East Carolina due to COVID restrictions.

John McNulty replaced Frank Cignetti as offensive coordinator and Dave DeGuglielmo took over as offensive line coach while four starters on the OL decamped for the NFL. BC coach Jeff Hafley felt Jurkovec’s participation in the Manning Passing Camp was a good crossover between spring ball and training camp.

“I told him to go have fun,” said Hafley. “I asked him how it went and he said ‘great’ and that was pretty much it.

“It is a great experience to learn and ask questions and kind of eye up the competition and see what it is like. I did ask him if there was anyone as big as him and he just kind of smirked. Wait until you see how big he is and he’s got some zip on the ball.”

Jurkovec came over from Notre Dame in January 2020, but this in his first real opportunity to make a fully prepared wire-to-wire run.

Jurkovec signed on with BC under new management when Hafley replaced Steve Addazio. COVID followed, eliminating the natural progressions made by a new staff with a new quarterback and disrupting spring ball and training camp.

Jurkovec played beyond expectations in his first season. He started 10 games and passed for 2,558 yards and 17 touchdowns while exploiting the formidable talents of wide receiver Zay Flowers and tight end Hunter Long (Dolphins).

There was speculation Jurkovec would declare eligible for the NFL draft after the 2021 season. Those aspirations were disposed in the second game when he broke his passing hand in the Eagles’ opening drive at UMass on Sept. 11.

Jurkovec accelerated his rehabilitation and returned after missing six games. He enjoyed a career game in BC’s 41-30 victory at Georgia Tech on Nov. 13 at Bobby Dodd Stadium. He rushed for 71 yards and touchdown runs of 8, 14 and 31 yards. Jurkovec completed 13-of-20 passes for 310 yards and two touchdowns to be named ACC Quarterback of the Week.

“The way he ran and he’s 235 (pounds) and he took off,” said Hafley. “He’s fast and we all kind of saw that and he threw some big balls in the pocket. But I would say it was the speed he showed in that game that’s he’s the whole package.”

Jurkovec is at a critical juncture in his career. He needs BC to succeed while personally standing out among his peers to take his game to the next level. McNulty has factored both of those into the new system.

“It’s going really well and he’s really embraced everything we are trying to do,” said McNulty. “He’s been in high spirits out here and he’s been playing at a high level.

“It’s his last year to win as many games as possible to set up his future. I think at first it was this whole new system and what is this going to be and he’s got a lot riding on it.

“I think we have both gotten to know each other really well. We’ve had great open lines of communication of what he likes and what he doesn’t like.”