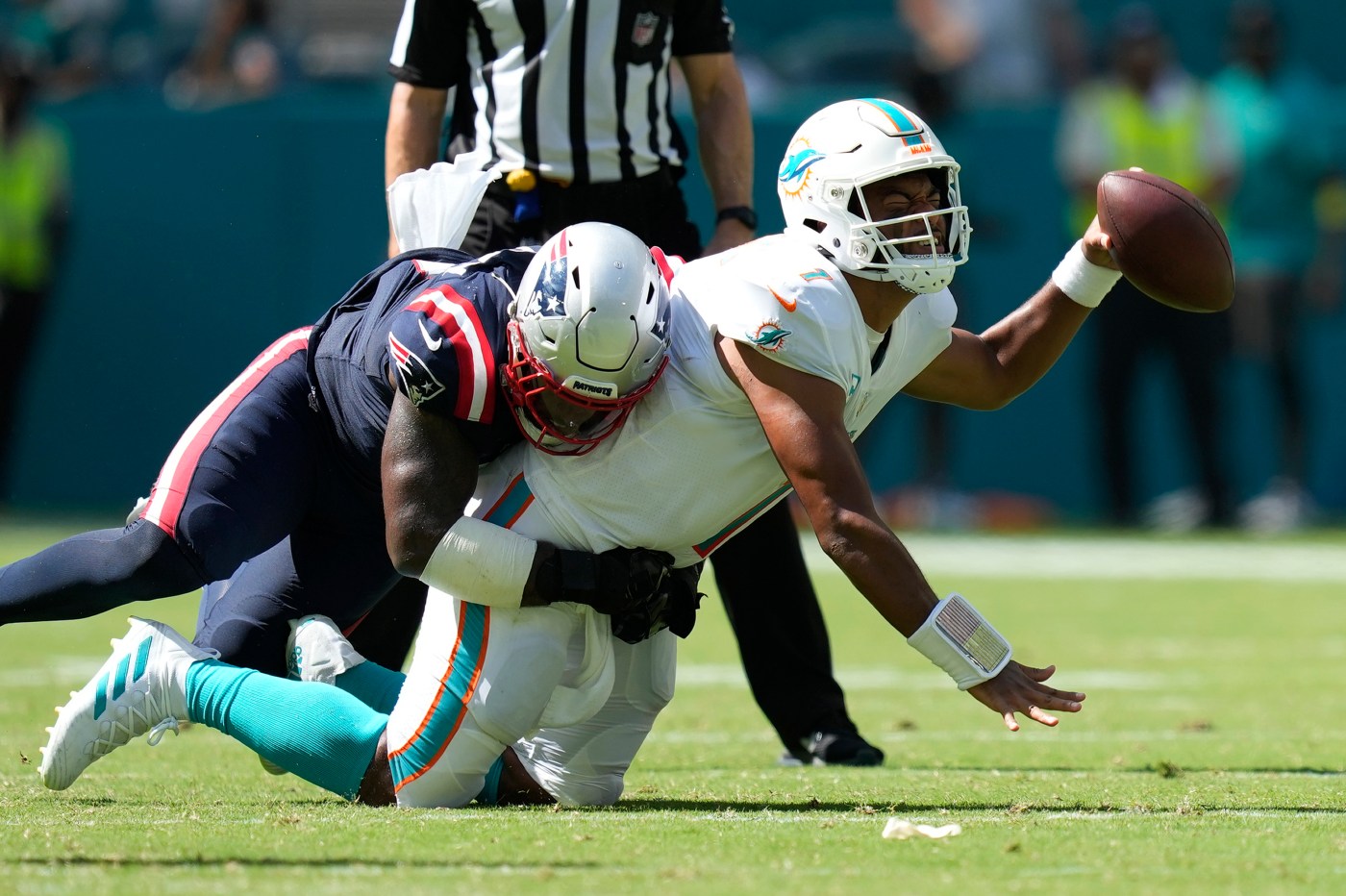 MIAMI GARDENS, Fla. — The Patriots secondary didn’t exactly get torched by the Dolphins’ elite fleet of receivers, as some predicted would happen.

And, the Fins didn’t exactly beat the Patriots on the ground, either.

In the final analysis, it’s really hard to point a finger at a defense that surrendered just 13 points, with one score falling on the offense.

No, the defense wasn’t the problem in a 20-7 season-opening loss to the Dolphins.

While the Pats has problems stopping the run last season, they defended well in that area. They kept the Fins new set of backs – Chase Edmonds, Raheem Mostert — in check, allowing just 65 overall rushing yards.

The pass rush got to Tua Tagovailoa for three sacks, four other quarterback hits and plenty of hurries.

Jonathan Jones, meanwhile, did not allow Tyreek Hill to beat them. The slot corner, who was moved to the boundary, basically held his own, with Hill catching eight passes for 94 yards. Hill’s longest play went for 26 yards. So none were really of the explosive variety.

“They did a good job finding ways to get him the ball,” said Jones. “I think we were able to limit a lot explosive plays. That was a big key going into the game, and we were able to do that for the most part.”

So the Patriots, for the most part, kept the star wideout in check.

And yet, there was still a bit of frustration over the performance.

Even giving up just a touchdown and a pair of field goals, he was right.

At times, they just couldn’t get off the field on third down (Miami was 6-for-14 on conversions) or just had bad luck. That’s something they’re looking to improve on for next week at Pittsburgh.

One of those bad plays McCourty spoke of happened at the worst possible time. The Dolphins decided to gamble on fourth-and-8 from the Pats 42 yard-line with 18 seconds left before the half.

Jaylen Waddle beat Jalen Mills in man-coverage, then Kyle Dugger and Ja’Whaun Bentley collided attempting to tackle him. That left an easy score for the Fins wideout.

“Terrible angle by me, bad eyes.  … I didn’t do much basically,” said Dugger. “It was a poor play by me. The corners trusted me to be in the middle of the field, and I wasn’t there, so it was definitely on me.”

There were a few missed tackles, one in particular by Myles Bryant that turned what could have been a loss at a key time, into a big gain.

But for the most part, the defense played well. With a few exceptions they played different zone coverages and handled Hill, Waddle and Cedric Wilson.

“The biggest thing for us, was letting them convert on third downs, which led to longer drives, which gave those guys more opportunities to make those plays” said Mills, “and that made the job tougher.”

They also weren’t able to force a big turnover, although it wasn’t for lack of trying. Tagovailoa was ruled down a few times he lost the ball, and was given a gift incompletion when it looked like he was throwing the ball away while being sacked by Matthew Judon.

Rookie Jack Jones had a near pick, that still wound up a reception by the Dolphins. And they somehow couldn’t come up with any of the soft floaters Tagovailoa put up for completions.

When you only give up 13 points, it’s more about nitpicking than anything.

McCourty still didn’t have the best feeling, even though the unit played well.

“But you want to win, man. I think you understand how this league works. It’s a result league, win or loss.”