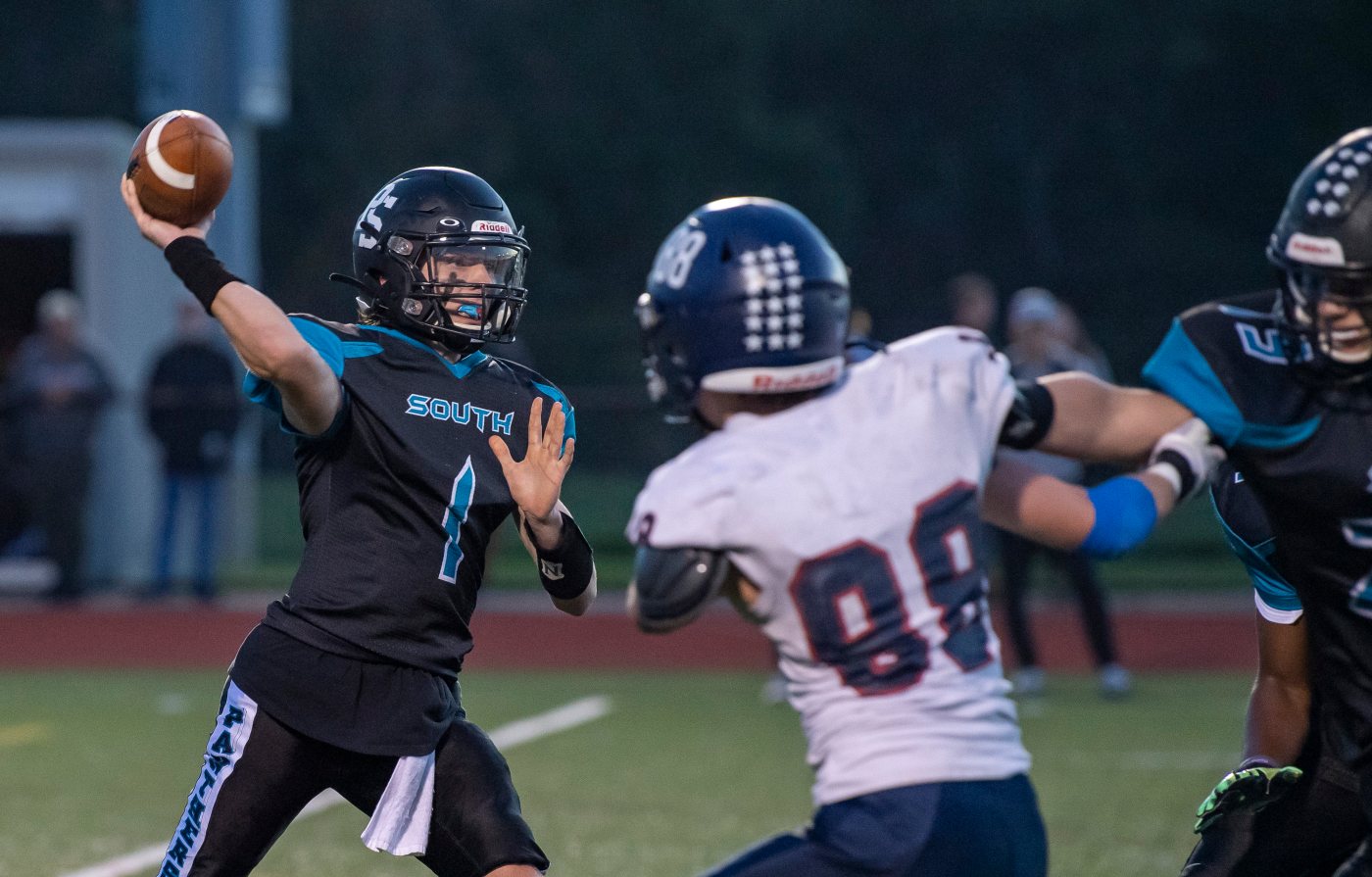 PLYMOUTH – If you get knocked down, the old adage is to just get back up.

Plymouth South trailed by 15 points early on but rallied in the second half in a 28-22 thriller over Pembroke in a key Patriot League Fisher Division battle.

Casious Johnson (20 carries; 58 yards) was bottled up most of the night for the Panthers on the ground but scored his two touchdowns in the pivotal second half, including the game-winner with 3:41 left in regulation to keep Plymouth South (5-0) undefeated on the season.

Johnson’s winning tally was set up by Plymouth South senior linebacker Jackson Elliott, who picked off hard-luck Pembroke quarterback Jake Falco inside the 10-yard line on a first-and-10 from the Panthers 14-yard line with 6:36 remaining in the fourth with the score knotted at 22-22. Elliott jumped the route from his inside slot and brought the ball out to the 20-yard line to set up the pivotal six-play drive.

“Being there in that moment inside the ten – I knew I had to make a play,” said Elliott. “We know when we see our offense struggling a bit, we know we have to pick each other up on the defensive side of the ball. We’ve done it all year, against Foxboro and Hanover as well, our defense is what kept us in those games and we have to act like we’ve been here before.”

Pembroke didn’t flinch as the Titans drove the field again on an 11-play drive that came up just short on a fourth-and-goal pass from Falco on the two-yard line that was broken up by Liam Davis with 41.3 seconds left in the game.

Pembroke (2-3) was the one who was hot with their first two possessions of the game. Brendan Kanya took the opening kickoff 90 yards to the house for the quick 6-0 Titans lead. After an offsides call, Pembroke head coach Steve Aborn Sr., opted for the two-point conversion and Plymouth South was already stunned.

Next set of downs for the Titans was a quick six-play drive ending with Falco finding Will McNamara in the end zone on a 28-yard toss-up on a fourth-and-12 play for the 15-0 lead with 8:20 still left in the first quarter.

Declan Davis finally got Plymouth South on the board on the Panthers own fourth-down call from the Titans 24. Cole Brunstrom, who was outstanding under center with 15-of-23 passing for 238 yards for the Panthers, found Davis in the middle of the end zone for a shoestring touchdown catch.

With the score tied 15-15 after a Gio Lynch 14-yard touchdown run for Plymouth South, Pembroke answered right away as Jack Tosone scored (20 carries for a game-high 103 yards) from 16 yards out to put the Titans back out front 22-15 at 6:35 of the third.

Johnson handled the rest with the game-tying score with seconds left in the third from 7-yards out and again for the rubber stamp touchdown after Elliott’s game-saving interception.

“We did things to (Johnson) that no one has done. We played tough, we stuck with the game plan, and we struggled a little in the secondary but that’s something we have to work on,” said Aborn Sr. “We moved the needle and our goal is to be playing our best football in the playoffs. The idea is to stop (Johnson) and you don’t have to be Bill Belichick to figure that out, but (Elliott’s interception) that killed us. You take a chance when you throw the ball.”