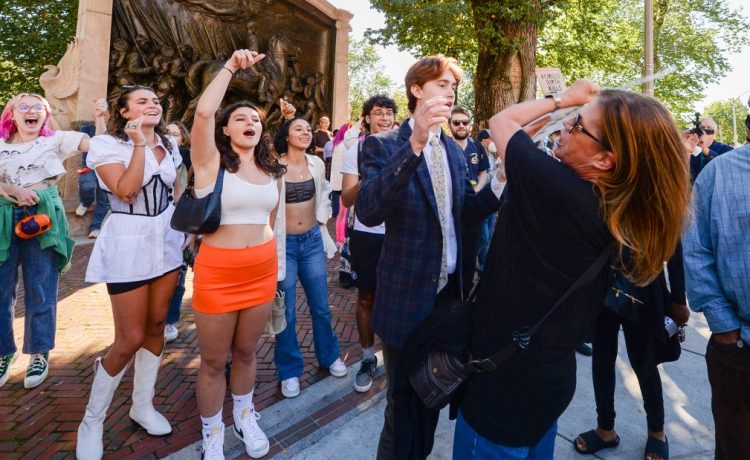 Pro- and anti-abortion rights activists faced off Saturday across a narrow divider at a “Men’s March for Life” rally outside the state capitol building.

“The Men’s March,” the name of both the event and the national organization calling on men to oppose abortion and march for the cause, rallied a few hundred people Saturday. The march through Boston, scheduled to go from 11:30 a.m. to 3:30 p.m., landed on the steps of the state house around 2 p.m., with a line-up of speakers ready.

As the first speaker took the mic, a trombone began blasting off a melody after melody, from songs from “The Imperial March” to “Montero,” interspersed with just noise.

“Drown ’em out,” shouted one brightly dressed woman into a swelling crowd of counter protestors separated from most of the marchers by a police-erected buffer zone of about 10 feet.

Around 2:30 p.m., a large crowd of people chanting “antifascista” circled in from the Boston Common, which more than doubled the pro-abortion rights crowd.

The rally called for a dress code of suits and formal religious attire, starkly contrasting with the mixed dress from clown suits to para-military-like garb worn by the counter-protestors.

While one speaker declared abortion an issue “men need to stand up for” and claimed pregnant people are being lied to about abortion options, counter protestors chanted about the separation of church and state and against “extremist Catholics.”

“These people want to pass laws that enforce Christian beliefs,” said one protestor, who identified herself as Sadie. “They want to control women’s bodies. You have to push back.”

The rally grew predictably more tense throughout the event, with several members of both sides escorted away and separated by police.

Around 3 p.m., an elementary-aged boy could be seen on the ground clutching at the barricade bars and sobbing openly in the commotion, prompting young protestors to more insistently scream at his father.

There were no arrests made during the event, the Boston Police Department confirmed.

The event also sparked tension between organizers and the Catholic Archdiocese of Massachusetts.

In a statement following the rally, Catholic Action League Executive Director C. J. Doyle said the event was a “tremendous success” but called out the Archdiocese’s lack of support. Coyle accused the Catholic leadership in the state of “erecting roadblocks” to participation in the event and having pro-abortion political connections.

The Massachusetts Archdiocese has stated support for anti-abortion efforts.