Todays Though > News > Psst…wanna know the secret to Christian Wilkins’ success for the Dolphins this season? – Boston Herald
News

Psst…wanna know the secret to Christian Wilkins’ success for the Dolphins this season? – Boston Herald 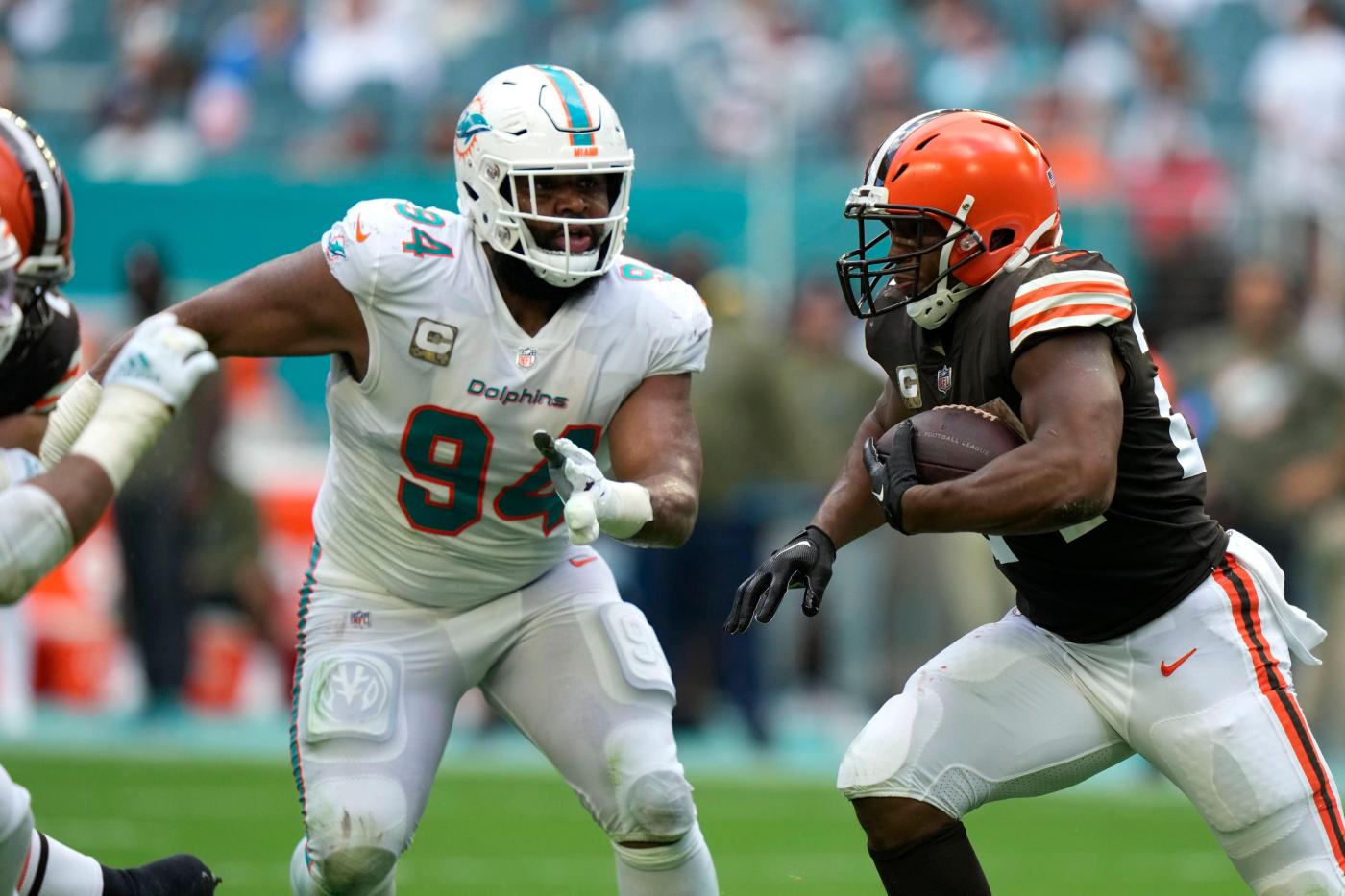 It’s been common this year to see a ball carrier burst beyond the line of scrimmage and ramble downfield for another 4 or 5 yards before being caught from behind by Dolphins 310-pound defensive tackle Christian Wilkins.

It’s just as common to see Wilkins drill a ball carrier behind the line of scrimmage for a 2- or 3-yard loss.

In short, the guy has done it all this year.

He’s having the best season of his four-year career, and it’s all due to hard work, dedication and a commitment to the day-to-day process of improving. It’s not sexy or glamorous, but it’s productive.

Wilkins’ 81 tackles are first among NFL defensive linemen. He also has 2.5 sacks, tied for fourth on the team, and his 14 tackles for losses, tied for seventh-most in the league, are twice as many as any other Dolphins defensive player. Oh, he also has two fumbles caused and a recovered fumble.

For all of his hard work, Wilkins, a Dolphins team captain, was named as a first alternate for the Pro Bowl. He might have made the Pro Bowl team except, for some reason, he’s listed as a defensive end, meaning he had to compete with guys who have big sack numbers as opposed to guys who occupy two blockers and stop the run.

“I’d say as a player first, Christian is probably the most schedule-based and process-based individual we have on the team,” Holland said. “You see him doing the same thing day in and day out, week in and week out. He continues to organize himself accordingly so he’s always ready for game day.

Wilkins’ dedication applies off the field, too. He won the William V. Campbell Trophy, the so-called “Academic Heisman,” in his final year at Clemson. It’s a trophy won by players such as Peyton Manning, Chad Pennington and Tim Tebow, to name a few.

Wilkins is serious about the things he does every day to get better, and it’s something that’s been noticed and mentioned by everyone from coach Mike McDaniel to teammates.

“I’m pretty intentional and, a Mike [McDaniel] word, ‘deliberate’ with my routine,” Wilkins said. “It’s not just a checking the box thing. I’m really intentional about it. I’m that way too so nothing throws me off from getting my work done — not family coming in town for our holiday, not, ‘Hey, Christian, we’re doing this. Come hang.’

Wilkins, the fun-loving guy with the big smile, the guy who you’ll often notice sprinting from the sideline to the end zone to greet those who score touchdowns, is having his best season at the right time. He’s a shining star on a struggling defense. Plus, the Dolphins’ 2019 first-round pick is eligible for a fifth-year extension or a new contract after this season.

Wilkins is aware he’s having the best season of his career, but it’s a label he doesn’t give much credence at this point.

“It’s just funny because people might say it’s my best year, but there’s a lot I feel like I leave out there,” he said. “I always feel like there’s a play I can make or something I can do — win, lose, draw — if it’s the best game of my career or the worst game,” he said.

“I always look at myself, and I’m a pretty harsh judge, trying to figure out what I can do.”

“Elite technique, elite effort, he has a great feel for the game,” he said. “He’s tough to deal with. He’s relentless.

“I think his biggest attribute may be the plays he doesn’t make initially, like when he’s chasing the ball down the field.”

“As a person, Christian is by far one of my favorite people in the building,” Holland said. “He’s always bringing you a positive attitude. He’s always ready to attack the day and joke around when you need to joke around. He’s a hell of a competitor but a better person.”

“I love working with the guy,” Clark said. “I think the way he approaches his preparation is the best of anybody I’ve ever been around, and I think football and succeeding in this game is very important to him. And he likes to have fun doing it.

“I know you guys see a lighter side, but there’s a side to him on the practice field, too, the want to get it right, to not repeat errors.”

We’ll see whether Wilkins’ hard work and commitment translates into success Sunday against Green Bay and quarterback Aaron Rodgers. But even if Wilkins doesn’t have a big statistical day, know that it won’t be because he was unprepared.

As you read this, you can rest assured Wilkins is doing the meticulous day-to-day work turns into tackles for losses and trouble for opposing offenses.

“I hold myself to a high standard to try to get things right,” Wilkins said, “because I know that’s what I need to do not only for myself but for the team.”