Todays Though > News > Putin, in Tehran, gets strong support from Iran over Ukraine – Boston Herald
News

Putin, in Tehran, gets strong support from Iran over Ukraine – Boston Herald 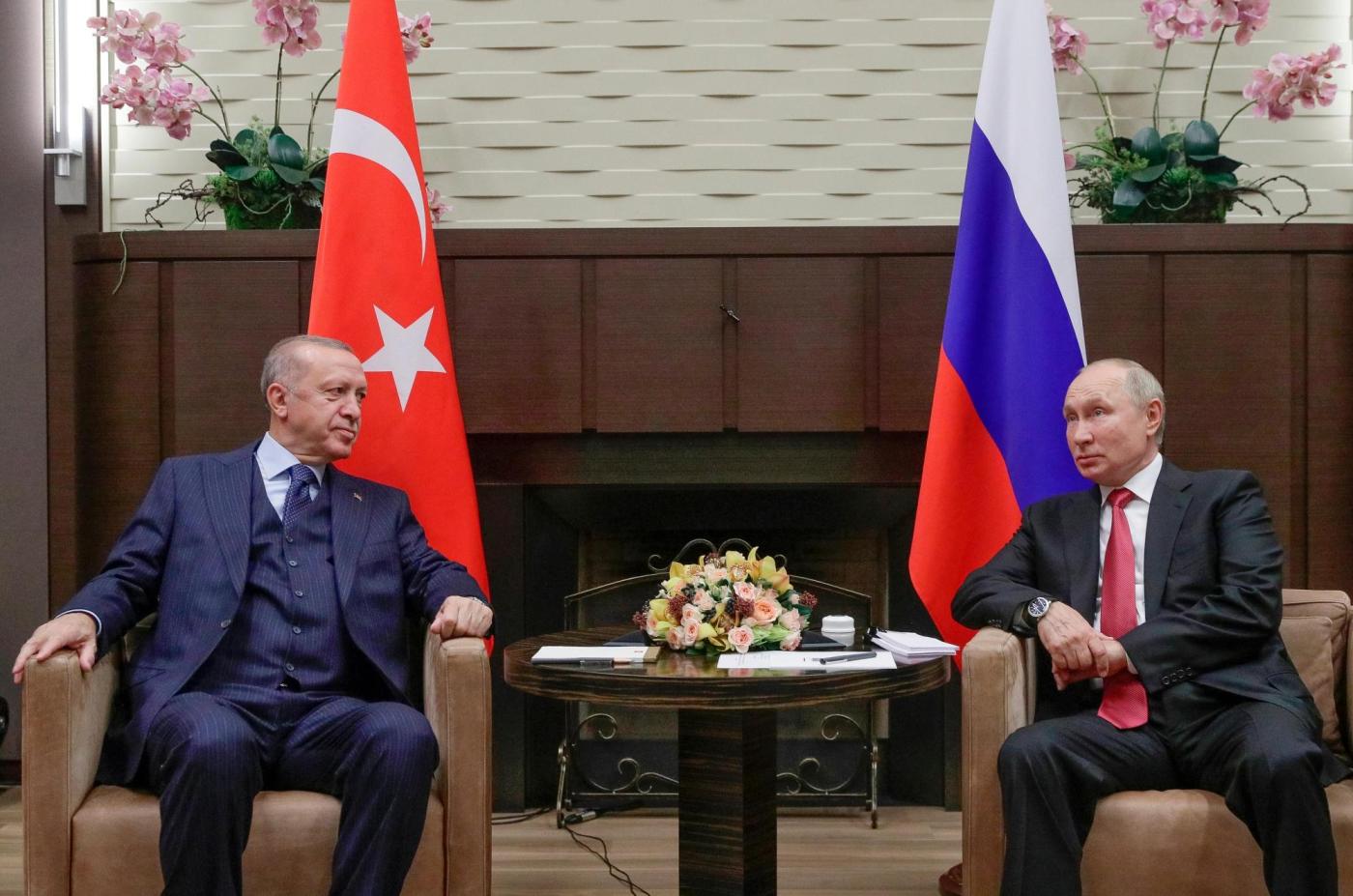 By NASSER KARIMI and VLADIMIR ISACHENKOV

Khamenei said that if Russia hadn’t sent troops into Ukraine, it would have faced an attack from NATO later, a statement that echoed Putin’s own rhetoric and reflected increasingly close ties between Moscow and Tehran as they both face crippling Western sanctions. NATO allies have bolstered their military presence in Eastern Europe and provided Ukraine with weapons to help counter the Russian attack.

In only his second trip abroad since Russia launched the military action in February, Putin conferred with Iranians President Ebrahim Raisi and Turkish President Recep Tayyip Erdogan on the conflict in Syria, and he used the trip to discuss a U.N.-backed proposal to resume exports of Ukrainian grain to ease the global food crisis.

Turkey, a NATO member, has found itself opposite Russia in bloody conflicts in Syria and Libya. It has even sold lethal drones that Ukrainian forces have used to attack Russian troops. But Ankara hasn’t imposed sanctions on the Kremlin, making it a sorely needed partner for Moscow. Grappling with runaway inflation and a rapidly depreciating currency, Turkey also relies on the Russian market.

Speaking to Erdogan as their meeting began, Putin thanked him for his mediation to help “move forward” a deal on Ukrainian grain exports. “Not all the issues have been resolved yet, but it’s good that there has been some progress,” Putin added.

Erdogan praised what he described as Russia’s “very, very positive approach” during last week’s grain talks in Istanbul. He voiced hope a deal will be made, and “the result that will emerge will have a positive impact on the whole world.”

U.N., Russian, Ukrainian and Turkish officials reached a tentative agreement on some aspects of a deal to ensure the export of 22 million tons of desperately needed grain and other agricultural products trapped in Ukraine’s Black Sea ports by the fighting. Reaching the agreement would mark a major step toward alleviating a food crisis that has sent prices of vital commodities like wheat and barley soaring.

The trip to Tehran has symbolic meaning for Putin’s domestic audience as well, showing off Russia’s international clout even as it grows increasingly isolated and plunges deeper into confrontation with the West. It comes just days after U.S. President Joe Biden’s visited Israel and Saudi Arabia — Tehran’s primary rivals.

From Jerusalem and Jeddah, Biden urged Israel and Arab countries to push back on Russian, Chinese and Iranian influence that has expanded with the perception of America’s retreat from the region.

It was a tough sell. Israel maintains good relations with Putin, a necessity given Russian presence in Syria, Israel’s northeastern neighbor and frequent target of its airstrikes. Saudi Arabia and the United Arab Emirates have declined to pump more oil beyond a plan approved by their energy alliance with Moscow.

But all the countries — despite their long-standing rivalries — could agree on drawing closer to counter Iran, which has rapidly advanced its nuclear program since former U.S. President Donald Trump abandoned Tehran’s atomic accord with world powers and reimposed crushing sanctions. Talks to restore the deal have hit a deadlock.

Backed into a corner by the West and its regional rivals, the Iranian government is ramping up uranium enrichment, cracking down on dissent and grabbing headlines with optimistic, hard-line stances intended to keep the Iranian currency, the rial, from crashing. Without sanctions relief in sight, Iran’s tactical partnership with Russia has become one of survival, even as Moscow appears to be undercutting Tehran in the black market oil trade.

“Iran is (the) center of dynamic diplomacy,” Iranian Foreign Minister Hossein Amirabdollahian wrote on Twitter, adding the meetings will “develop economic cooperation, focus on security of the region … and ensure food security.”

Fadahossein Maleki, a member of the Iranian parliament’s influential committee on national security and foreign policy, described Russia as Iran’s “most strategic partner” on Monday. His comments belied decades of animosity stemming from Russia’s occupation of Iran during World War II — and its refusal to leave afterward.

In a sign of increasingly close military cooperation, Russian officials in recent weeks visited an airfield in central Iran at least twice to review Tehran’s weapons-capable drones for possible use in Ukraine, the White House has alleged.

Putin hailed the importance of close ties between Moscow and Tehran at his meetings with the Iranian leaders.

“Our relations are developing at a good pace,” Putin said at the start of the meeting with Raisi, adding that they two countries have worked to “strengthen their cooperation on international security and contribute significantly to the Syrian settlement.”

In a closing statement, he offered strong support to Tehran over the deadlocked nuclear deal, calling for its full revival and a complete lifting of sanctions against Iran to allow a “free development of cooperation in any areas without any discrimination.”

During their trilateral talks, the presidents discussed the decade-old conflict in Syria, where Iran and Russia have backed President Bashar Assad’s government, while Turkey has supported armed opposition factions. Russia intervened in the conflict in 2015, pooling efforts with Iranian forces and using its air power to shore up Assad’s fledgling military.

Erdogan focused on Turkey’s action to push from its borders U.S.-backed Syrian Kurdish fighters, following up on previous threats of a new military offensive in northern Syria. The planned operation is part of Turkey’s efforts to create a safe zone along its border with Syria that would encourage the voluntary return of Syrian refugees.

Erdogan said Turkey was determined to “drive out the centers of evil” that target Turkey’s security.

He said Ankara expects Russia and Iran “to support Turkey in this fight,” adding that the regions of Tel Riifat and Manbij — where Turkey has said it planned to send its troops — had turned into a “terror bed.”

“The greatest favor that would be made to the Syrian people would be the complete removal of the separatist terrorist organization from territories that it occupies,” Erdogan said.

In an apparent reference to Turkey’s concerns, the three presidents said in a joint statement that they “rejected all attempts to create new realities on the ground under the pretext of combating terrorism, including illegitimate self-rule initiatives, and expressed their determination to stand against separatist agendas.”

At the same time, in an earlier, separate meeting with Erdogan, Khamenei sternly warned against the planned Turkish incursion.

“Any sort of military attack in northern Syria will definitely harm Turkey, Syria and the entire region, and will benefit terrorists,” Iran’s top leader said, stressing the need to “bring the issue to an end through talks.”

Humanitarian issues in Syria have also come into focus since Russia used its veto power at the U.N. Security Council last week to restrict aid deliveries to 4.1 million people in Syria’s rebel-held northwest after six months, instead of a year. Erdogan stressed that six months weren’t enough.

Follow AP’s coverage of fighting in Ukraine at https://apnews.com/hub/russia-ukraine