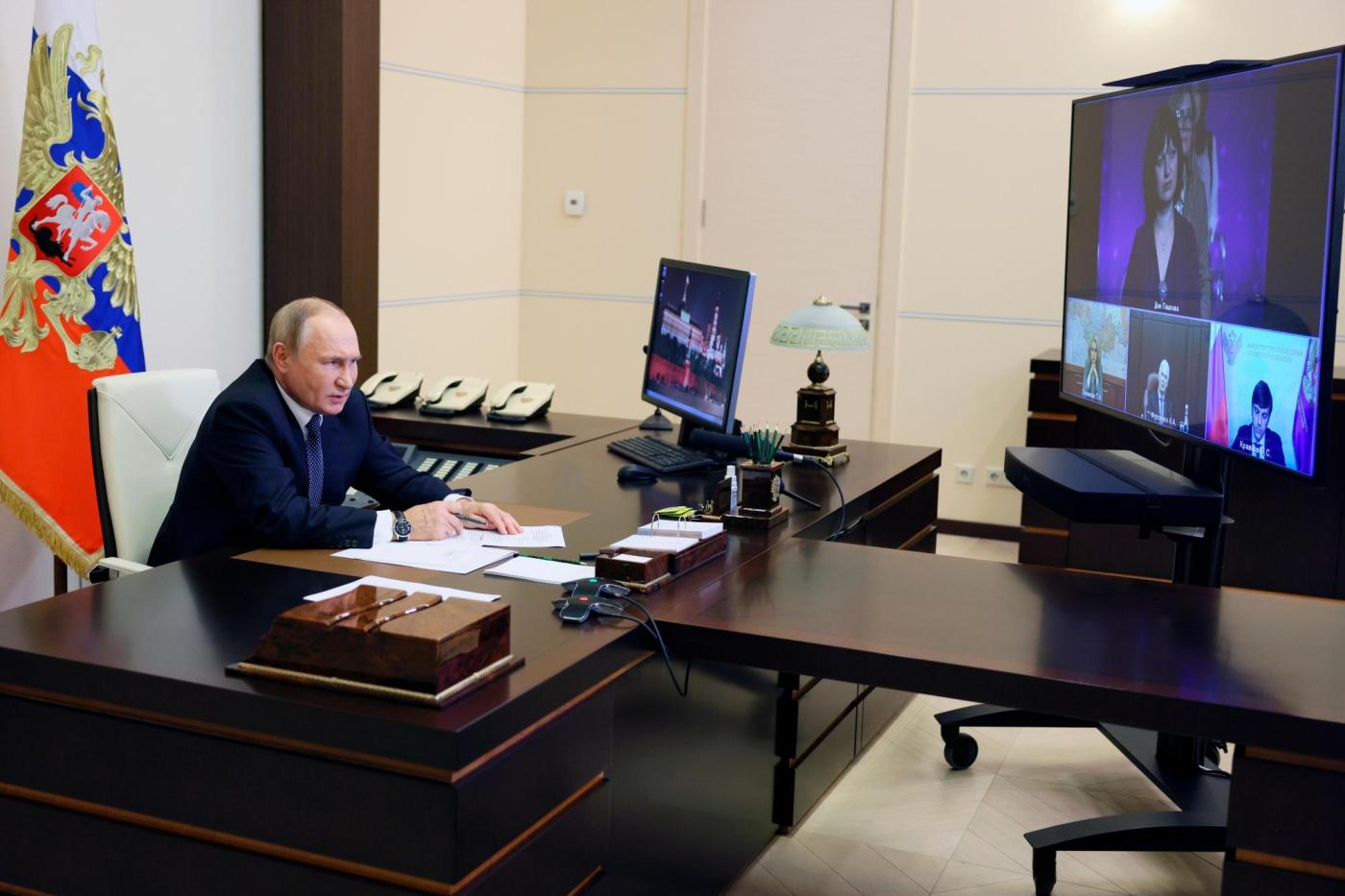 KYIV, Ukraine (AP) — Russian President Vladimir Putin signed the final papers Wednesday to annex four regions of Ukraine while his military struggled to control the new territory that was added in violation of international laws.

Ukrainian law enforcement officials, meanwhile, reported discovering more evidence of torture and killings in areas retaken from Russian forces. In Lyman, an eastern town liberated after more than four months of Russian occupation, residents emerged from their destroyed homes to receive packages of food and medicine.

In a defiant move, the Kremlin held the door open for further land grabs in Ukraine.

Speaking in a conference call with reporters, Kremlin spokesman Dmitry Peskov said that “certain territories will be reclaimed, and we will keep consulting residents who would be eager to embrace Russia.”

Peskov did not specify which additional Ukrainian territories Moscow is eyeing, and he wouldn’t say if the Kremlin planned to organize more such “referendums.”

Putin last week signed treaties that purported to absorb Ukraine’s Donetsk, Luhansk, Kherson and Zaporizhzhia regions into Russia. The annexation followed Kremlin-orchestrated “referendums” in Ukraine that the Ukrainian government and the West have dismissed as illegitimate.

The Russian president defended the validity of the vote, saying it’s “more than convincing” and “absolutely transparent and not subject to any doubt.”

“This is objective data on people’s mood,” Putin said Wednesday at an event dedicated to teachers, adding that he was pleasantly “surprised” by the results.

Putin also signed a decree Wednesday declaring that Russia was taking over the Zaporizhzhia Nuclear Power Plant, the largest in Europe. Ukraine’s Foreign Ministry called it a criminal act and said it considered Putin’s decree “null and void.” The state nuclear operator said it would continue to operate the plant, which was occupied by Russian forces early in the war.

On the ground, Russia faced mounting setbacks, with Ukrainian forces retaking more and more land in the eastern and southern regions that Moscow now insists are its own.

The precise borders of the areas Moscow is claiming remain unclear, but Putin has vowed to defend Russia’s territory — including the annexed regions — with any means at his military’s disposal, including nuclear weapons.

Shortly after Putin signed the annexation legislation, the head of Ukrainian President Volodymyr Zelenskyy’s office, Andriy Yermak, wrote on his Telegram channel that “the worthless decisions of the terrorist country are not worth the paper they are signed on.”

“A collective insane asylum can continue to live in a fictional world,” Yermak added.

Zelenskyy responded to the annexation by announcing Ukraine’s fast-track application to join NATO. In a decree released Tuesday, he also ruled out negotiations with Russia, declaring that Putin’s actions made talking to the Russian leader impossible.

Serhiy Bolvinov, who heads the investigative department of the national police in the region, said authorities are investigating an alleged Russian torture chamber in the village of Pisky-Radkivski.

He posted an image of a box of what appeared to be precious metal teeth and dentures presumably extracted from those held at the site. The authenticity of the photo could not be confirmed.

Andriy Kostin told The Associated Press on the sidelines of a security conference in Warsaw that he had just been notified of four bodies found with signs of possible torture. He said they were believed to be civilians but an investigation was still needed.

During his public speech, Kostin said officials found the bodies of 24 civilians, including 13 children and one pregnant woman, who had been killed in six cars near Kupiansk. It was not clear when the discovery was made.

On the battlefield, Russia and Ukraine gave conflicting assessments of a Ukrainian counter-offensive in the Russian-occupied southern Kherson region. A Moscow-installed regional official insisted that Ukrainian advances had been halted.

“As of this morning … there are no movements” by Kyiv’s forces, Kirill Stremousov said Wednesday in comments to state-run Russian news agency RIA Novosti. He vowed the Ukrainian fighters would not enter the city of Kherson.

However, the Ukrainian military said the Ukrainian flag had been raised above seven Kherson region villages previously occupied by the Russians. The closest of the liberated villages to the city of Kherson is Davydiv Brid, some 100 kilometers (60 miles) away.

The deputy head of the Ukrainian regional government, Yurii Sobolevskyi, said military hospitals were full of wounded Russian soldiers and that Russian military medics lacked supplies. Once they are stabilized, Russian soldiers were getting sent to Crimea, which Russia annexed from Ukraine in 2014.

“Not everyone arrives,” Sobolevskyi wrote.

In the neighboring Mykolaiv region, the governor said Russian troops have started to withdraw from Snihurivka, a city of 12,000 that Moscow seized early in the war and annexed along with the Kherson region. A Russian-installed official in Snihurivka, Yury Barbashov, denied that Russian troops had lost control of the city, a strategic railway hub, but said the Ukrainian forces were advancing.

After reclaiming the Donetsk city of Sviatohirsk, Ukrainian forces located a burial ground for civilians and found the bodies of four people, according to Gov. Pavlo Kyrylenko.

When Russian troops pulled back from the Donetsk city of Lyman over the weekend, they retreated so rapidly that they left behind the bodies of their comrades. Some were still lying by the side of the road leading into the city on Wednesday.

Lyman sustained heavy damage both during the occupation and as Ukrainian soldiers fought to retake it. Mykola, a 71-year-old man who gave only his first name, was among about 100 residents who lined up for aid on Wednesday.

“We want the war to come to an end, the pharmacy and shops and hospitals to start working as they used to,” he said. “Now we don’t have anything yet. Everything is destroyed and pillaged, a complete disaster.”

In the Luhansk region, also in the eastern Donbas, Gov. Serhiy Haidai said Ukrainian forces have retaken six villages. He did not name the villages, but said the retreating Russian forces are mining the roads and buildings.

Haidai also said the Russian forces were indiscriminately drafting men from the Luhansk region. “They no longer ask about health and marital status; sick people and those with many children are being taken away,” he said.

In central Ukraine, multiple explosions rocked Bila Tserkva, a city about 80 kilometers (50 miles) south of the capital, Kyiv. Regional leader Oleksiy Kuleba said six Iranian-made Shahed-136 drones struck the city and set off fires at what he described as infrastructure facilities. One person was wounded.

Follow AP’s coverage of the war in Ukraine at https://apnews.com/hub/russia-ukraine