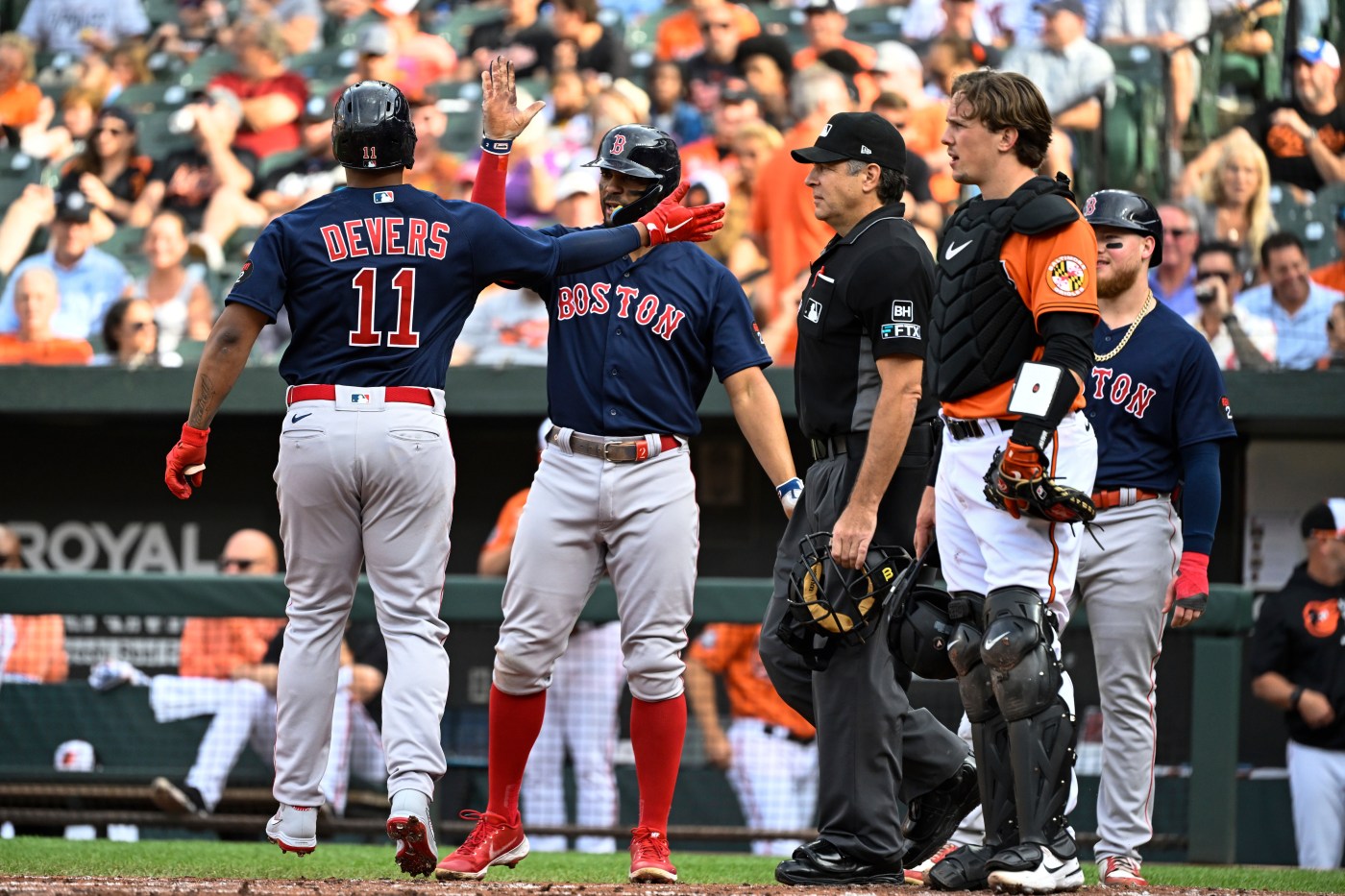 Despite a disappointing season, the Red Sox have put together quite a few days like Saturday.

Everything went their way.

They hit well, they pitched well and they played some spectacular defense on their way to an 17-4 win over the Orioles at Camden Yards.

It cut the difference between the two teams to 5 1/2 games with less than a month remaining, though at this point wins mean more for the Orioles (73-66) than the Red Sox (68-72). The O’s are now 4 1/2 games back of the Rays, Blue Jays and Mariners in the Wild Card chase.

Still, the Sox needed a day like this one. They scored a season-high 17 runs and collected 21 hits.

Devers going deep isn’t often newsworthy, but it was this time. When Devers hit a beach ball from Jordan Lyles over the fence for a grand slam in the first inning, it was a minor milestone.

It’s not that anyone is concerned about the projectability or potential of a guy who is clearly a top-25 talent in the game, but it’s never good to see someone fading hard down the stretch. It’s looked that way of late, as Devers entered the day without a home run in almost a month, with his last homer coming on Aug. 14.

The slump started at the All-Star break and has been ugly. Until Saturday, he was hitting .191 with a .591 OPS in the second half.

There’s a clear indicator of why, as Devers has battled a right hamstring injury, but his inability to hit for average or power in this time has been at least somewhat of a concern.

The Sox are a much different team with Devers in their lineup, as they proved during his absence in early September, when they scored just 3.8 runs per game while Devers was on the injured list in late July. They’ve scored 4.5 runs per game overall this year.

There have been some ugly moments for the Red Sox defense this year, but a lot of it could be summed up by some inconsistent play at first base and injuries to some of their best defensive players.

Two of them, Kiké Hernandez and Trevor Story, missed two months this summer and only recently returned. The Sox defense has looked night and day with those two back on the diamond.

Saturday night, Hernandez displayed his elite defense in center field while making a spectacular read on a long fly ball by Ryan Mouncastle. With a perfect jump and clean route, the speedy 31-year-old beat the ball to the spot at the warning track and made it look easy with a leaping catch to rob a possible home run.

Though the Sox signed Hernandez to a one-year, $10-million extension for 2023, it remains to be seen if he’ll be the everyday center fielder or slide in at a different position, perhaps second base, if Story is needed to replace Bogaerts at shortstop.

Story gave a taste of his abilities at shortstop in the fifth inning, when he slid over to shortstop on a shift, then peddled backwards to make a fully-stretched out catch to steal a hit from Austin Hays. Story is listed at 6 feet, 2 inches, but looked even taller as he flew flew the air and snagged the ball in the tip of his mitt.

Despite having just 392 plate appearances this year, Story remains the third most-valuable Red Sox position player with 2.5 WAR, per FanGraphs.

Of all the quality players the Red Sox are likely to lose to free agency this year, Michael Wacha is among the most important.

Despite fading in the fifth inning against the Orioles on Saturday, Wacha made it through six innings of three-run ball while striking out five, pushing his ERA to 2.69. He’s 11-1 and has clearly been the Sox’ best pitcher all year.

They could make a strong case to retain him with a one-year qualifying offer likely to be worth $20 million. If he declines, at least the Sox would get draft pick compensation were Wacha to sign elsewhere.