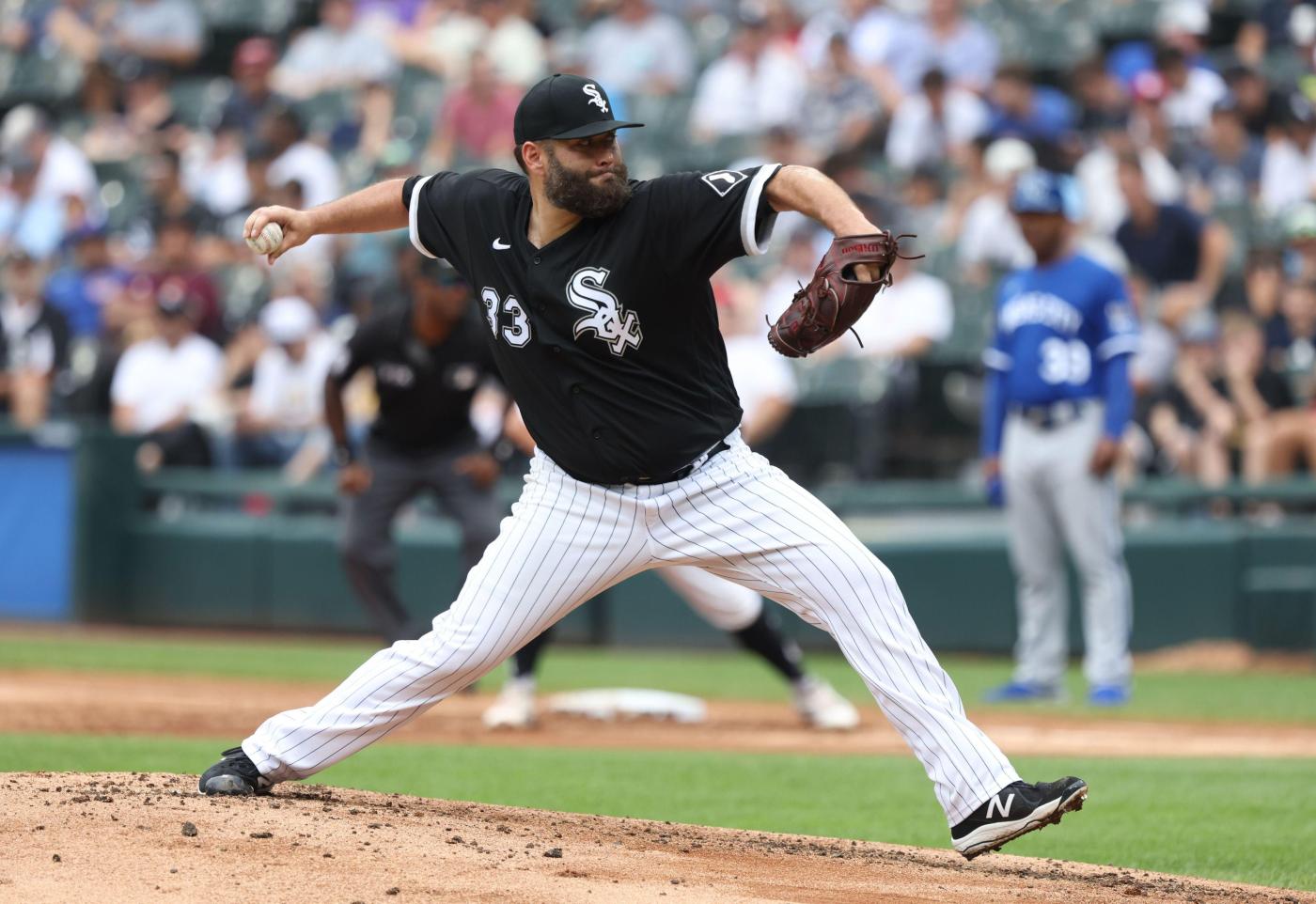 Lance Lynn went more than an hour between appearances on the mound Wednesday against the Kansas City Royals.

What does a starting pitcher do during that stretch?

“Played cards,” Lynn joked. “No, I threw twice (in the tunnel). Had hot packs on the whole time. Ride the bike. It was an hour and 10 minutes of staying hot. I’m too old to sit down.”

A rain delay did not appear to affect the Chicago White Sox right-hander, who allowed one run on four hits in six innings in a 4-1 victory in front of 19,753 at Guaranteed Rate Field.

“As soon as the first inning, that ball was jumping out of his hand,” Sox manager Tony La Russa said. “And when it jumps, it’s got life. Makes all his complementary pitches tougher because it all looks the same.

“That’s another plus in that rotation. You know what he’s capable of if he’s himself. Sure looks like it.”

Lynn struck out eight and didn’t surrender a walk, helping the Sox take two of three in the series.

“My favorite part of the afternoon was (Lynn) and his teammates, they didn’t get distracted,” La Russa said. “I really liked our concentration. Lynn led the way and we jumped early with some runs.”

Lynn received offensive support from José Abreu, who hit a three-run homer in a game that featured a 65-minute rain delay.

The rain came in the bottom of the second with the Sox ahead 1-0. Royals starter Brady Singer returned after the delay and struck out Adam Engel to end the inning.

Tim Anderson began the third for the Sox with a single. He moved to second on a one-out single by Eloy Jiménez, who went 3-for-4 to extend his hitting streak to nine games.

“Everybody gets better if you share the responsibility for starting rallies, moving them over and moving them in,” La Russa said.

The Sox had 12 hits, their third straight game with at least 10.

“We are all clicking,” said first baseman Andrew Vaughn, who went 2-for-4 with a run. “Stringing hits together, everybody was hitting the ball hard and finding holes and we were putting them all together and scoring runs, which is good.

“We put up 10-plus (hits) today. It’s a huge boost for our offense. Everyone, one through nine, is going up there swinging and it’s good.”

Lynn felt good before and after the delay. He allowed three singles, two to Brother Rice alumnus Michael Massey, and a solo home run to Bobby Witt Jr.

“When you’re looking in the grand scheme of things, you’re probably looking at two ups because you had to throw in the tunnel (during the delay),” Lynn said. “I threw to a catcher twice. So you’re looking at two more ups as the fourth inning by that time (the game resumes). So to get through the sixth was good.

“Would have liked to go deeper, but with an hour delay that wouldn’t have been smart.”

Relievers Jake Diekman (two), Kendall Graveman (three) and Liam Hendriks (one) combined for six strikeouts during the last three innings as the Sox wrapped up a 4-2 homestand.

The Sox remain two games behind the Minnesota Twins in the American League Central. Before Tuesday’s game, Sox general manager Rick Hahn discussed the desire to see the team recapture the “swagger” it displayed in the past.

“Day in and day out, we just have to keep playing hard, put quality at-bats together and make our pitches,” Lynn said. “When it’s all said and done and we do that and start winning some games, that’s when the swagger comes back. It’s hard to have swagger when you’re playing like (crap).”